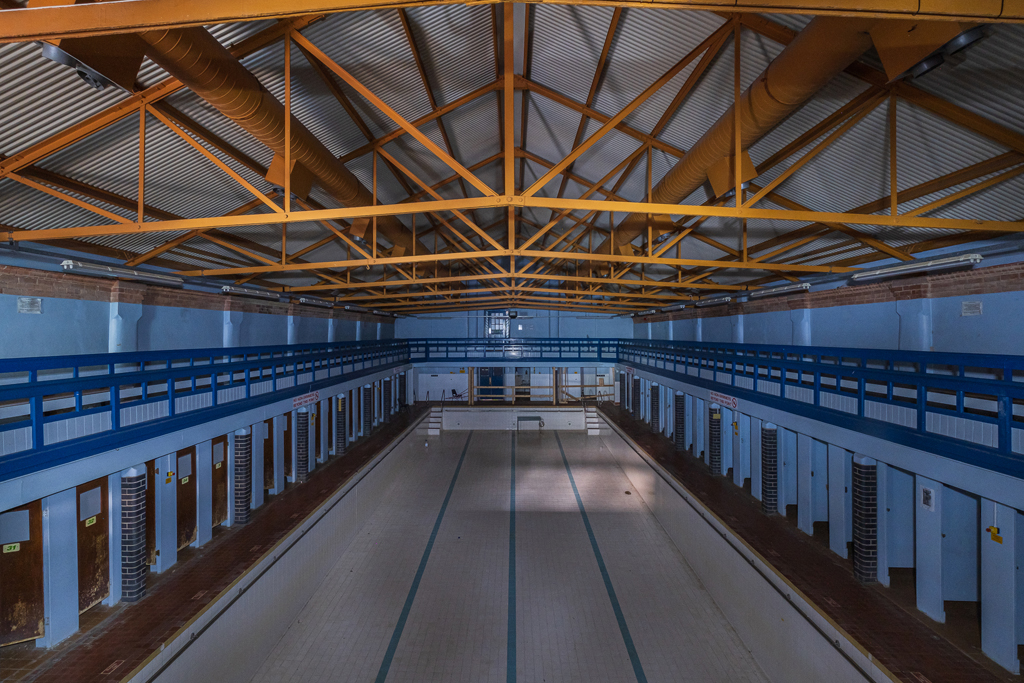 Another item ticked off on the long list of things to get around to looking at in Stoke. This one perhaps having been on the list for the longest, basically since it closed in 2011. The baths were opened in 1890, forming a part of the wider Victoria Institute complex, and still retained many of the original features such as the poolside changing cubicles and viewing gallery up until being closed by the council in 2011 as part of the wider budget cuts that were ongoing. It had been promised that alternative provisions for swimming would be made at the nearby Dimensions complex, but as of 2020 this is still yet to happen. It was one of only a few dozen continuously operating Victorian swimming baths still in existence in the UK, I have read that it may have been the oldest/longest but I've not done the research to back this up.

The closure was fairly controversial and attracted plenty of attention, with a campaign group set up to try and take over the running of the pool, but apparently the council were doing their best to make this difficult and in the end nothing came of it. Since then the buildings have been opened up a couple of times for art exhibitions but there don't appear to be any long term proposals aside from a mooted sell off. It's a Grade 2 listed structure, and of course a swimming baths is pretty hard to re-purpose, so who knows what the future holds.

An excerpt from the book "Tunstall Through Time":

By the late nineteenth century, Tunstall had aspirations. The former Chief Bailiff, T. G. Booth, remarked at the opening of Tunstall swimming baths in 1890 that 'they all knew that Tunstall was a very young town, and that the popular name for it was "That robust youth" ... They were striving ahead of the mother town of Burslem, and they always wanted to lead the way instead of being left behind.'

Quite a nice explore, only a small place, but it's always enjoyable to finally crack somewhere. I have to imagine that at some point in the past the main pool would have had a nicer roof possibly with sky lights. The more modern tin roof means that it is absolutely black dark within the pool, and therefore was a pain to photograph, especially with a low batteried torch! The small reception area out front was quite nice with an old wood and glass pay box and some nice tiling (possibly from the Tunstall Tileries of John Nash Peake who first proposed the complex be built). Immediately off the reception is a long room more recently used as a dance studio, the building once housed slipper baths as well as the main pool, perhaps they would have been located here originally. There are more modern changing rooms tucked into an extension which were of no interest and upstairs there are several rooms devoid of any notable features.

The frontage is a nice red brick affair that matches the other nearby municipal buildings, thankfully not too butchered aside from the rather awful signage. The outer gables feature the Tunstall coat of arms, whilst the central gable holds a date stone. The left side of the building with the twin arches was originally the fire station but is now an in use electricity substation, there may well be some original features tucked inside. 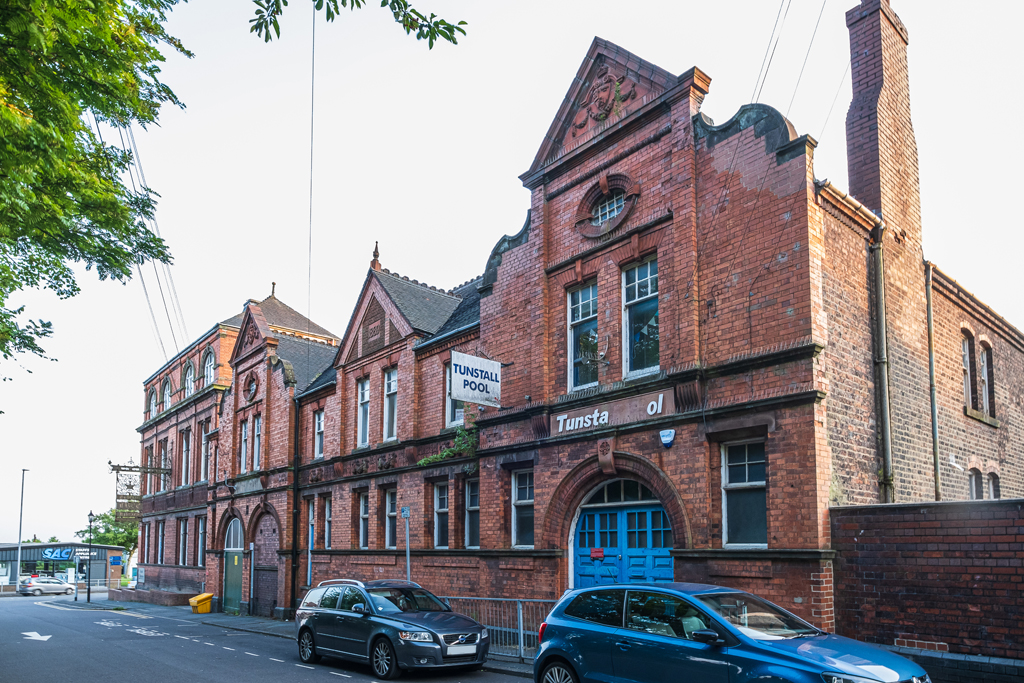 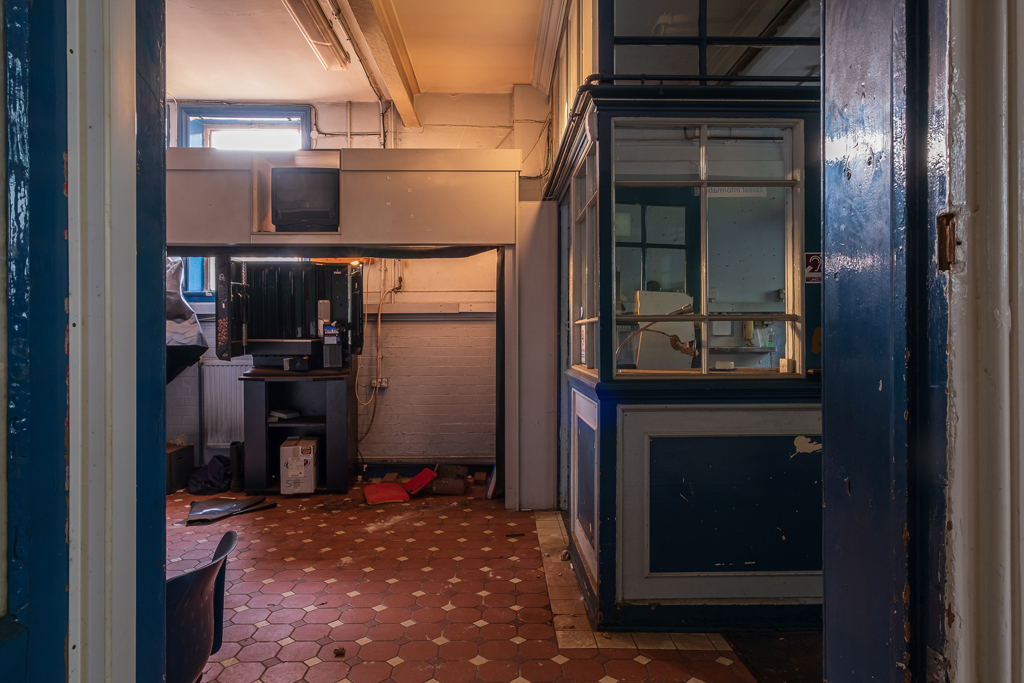 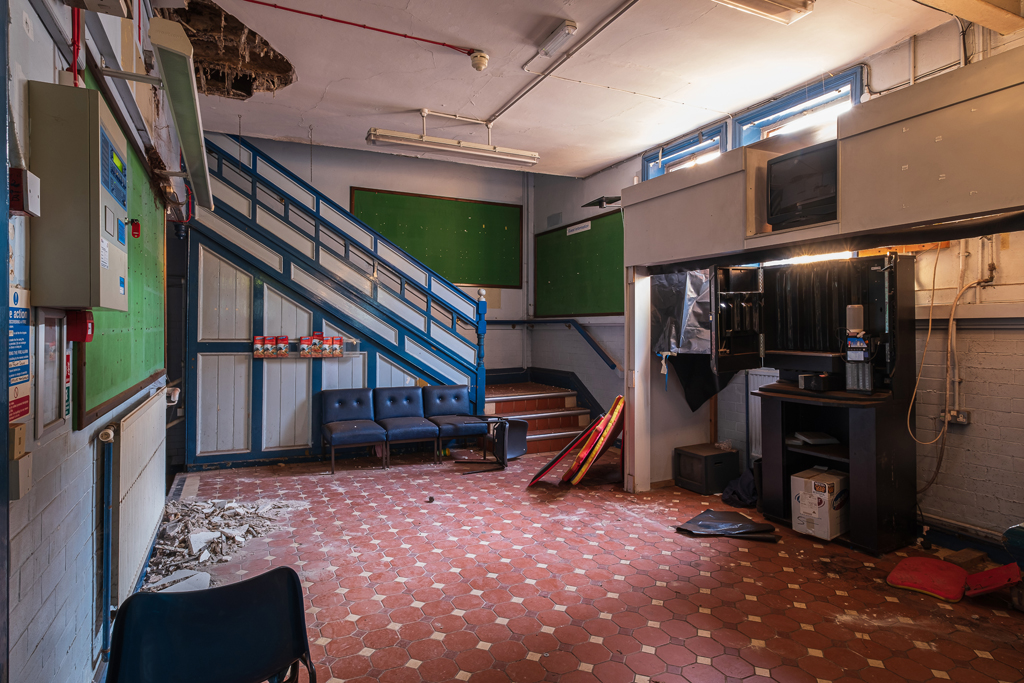 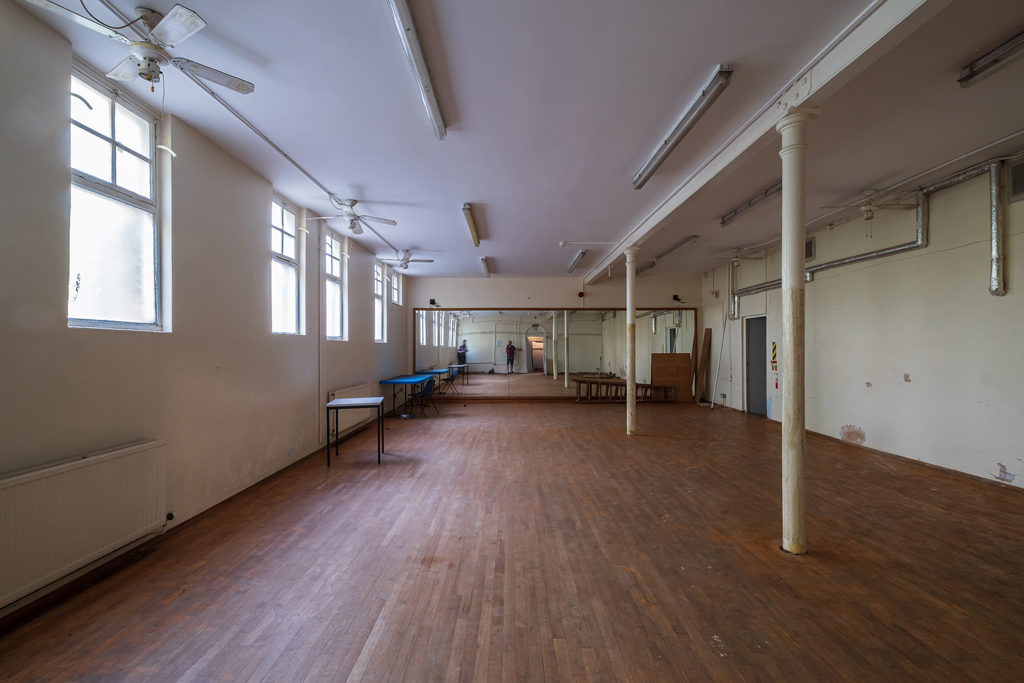 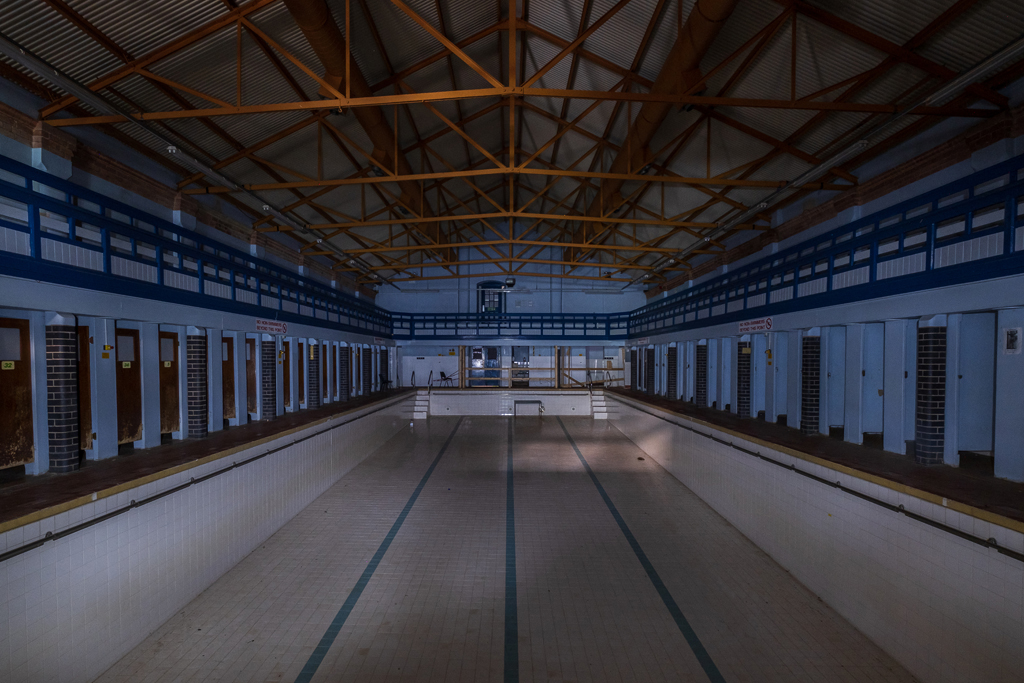 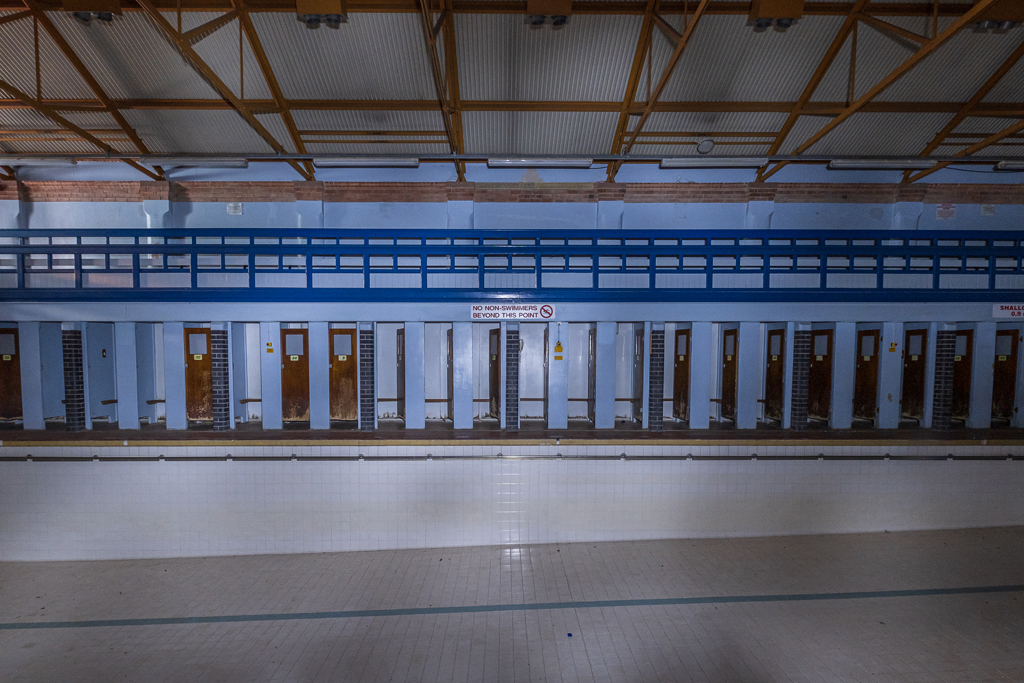 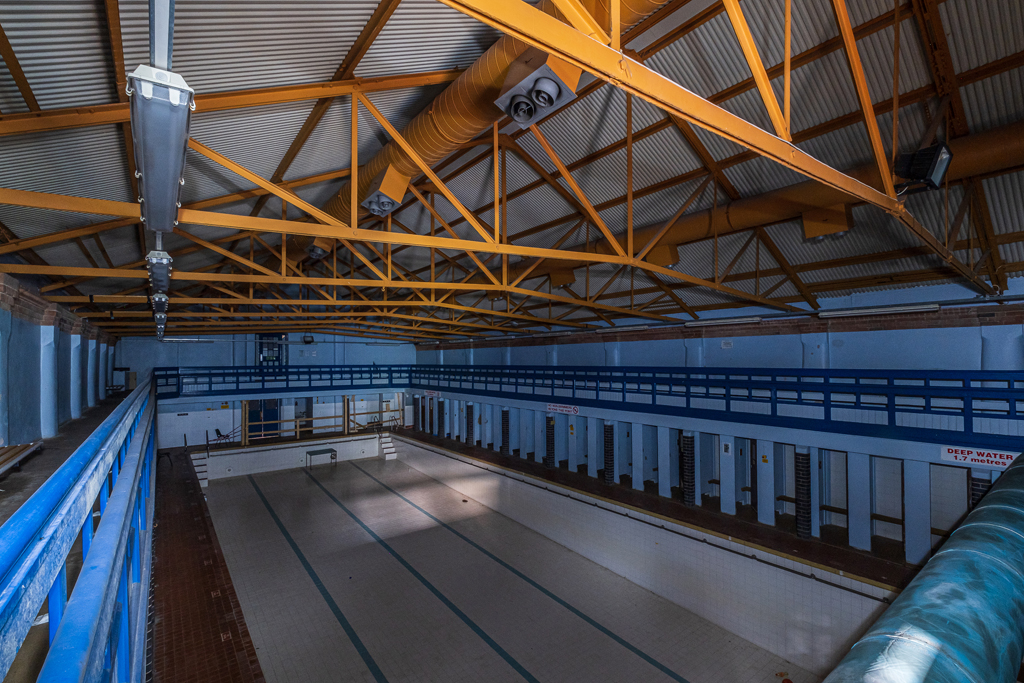 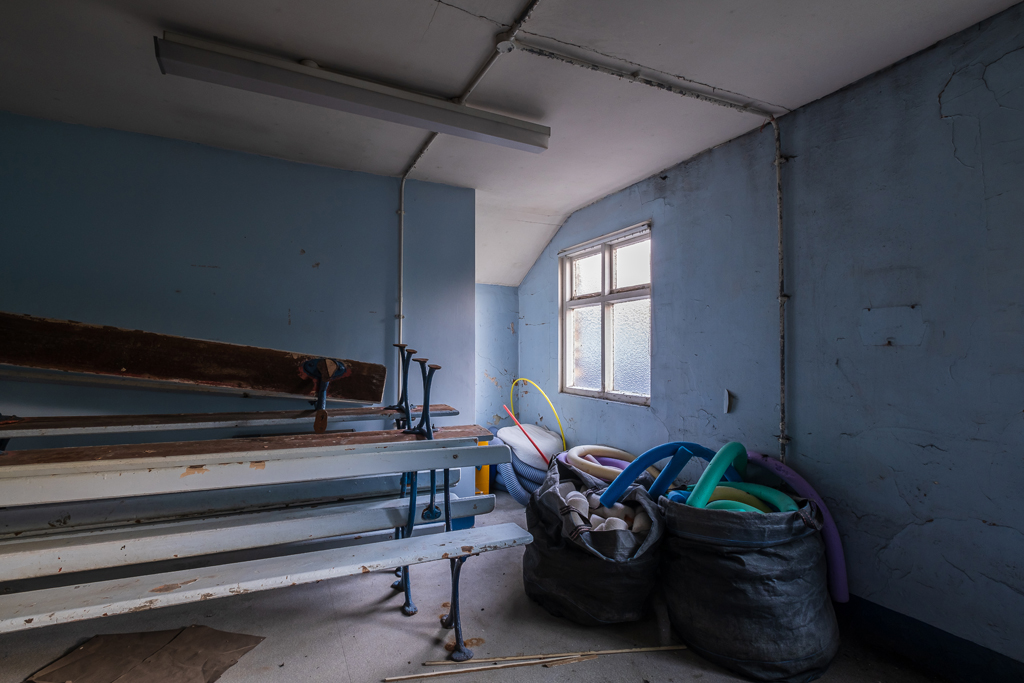