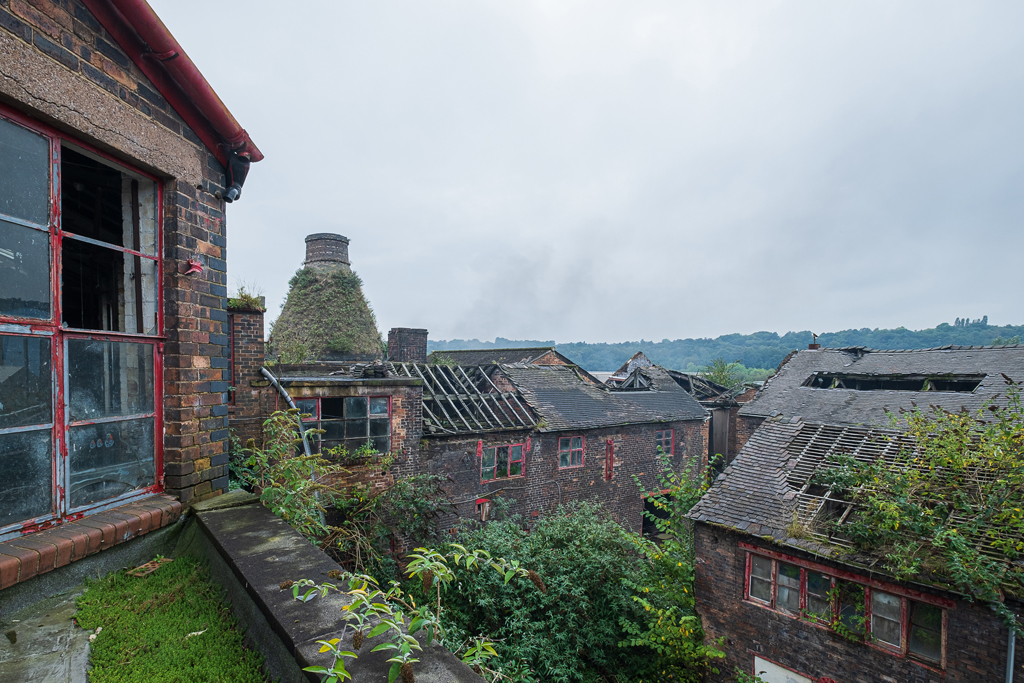 For whatever reason in the years that I've been doing this I'd never actually had a serious look at this place, I guess it just never really looked worth the effort, but I think I was wrong really, I probably should have had a look years ago when it wasn't so wet. It's one of those weird places that are all too common around here where they are basically an entirely derelict building but portions of the place are still used for a variety of purposes. Today there is a table top sale place that takes up a big chunk of the "modern" factory, a car wash that operates on part of the factory shop car park, some random lock up units, and at one point a gym on the upper floors. Quite how all of these things continue to keep going whilst the buildings fall down around them I don't know, but it seems to work I guess. The parts that are in use are obviously fairly dull and barely worth a look in as they don't contain anything of any historic note really, but we still had a look around and of course sneaked off in to the various "off limits" areas to see if there was anything nice to be found. Unfortunately niceness was lacking in these parts, it did however mean we could get into the very front buildings that run along Newcastle Street, these are in a very sorry state and only recently some large steels have been inserted to try and stop the facade from falling on the road. Downstairs there were remnants of the factory shop but it was all very soggy and well past it.

After that it was time to have a look around the rest of the place, probably about 80% of the buildings are what I would call derelict, some may suggest they are in use but who knows. Upon entering it was a bit of a disappointment as _motionlessinmike had suggested in his report, you're immediately faced with heaps of junk. Thankfully it's one of those nice sites that take a bit of work and ingenuity to find the stuff worth looking at, as most of the staircases are none existent and there are various bits where the floors are giving way/have already given way. I always enjoy those kinds of places though as it's just fun trying to work out how to get about the place, much better than a walk in where everything is right there in front of you. Having seen Mike's report I knew there was some good stuff to be found so we spent quite a while rummaging about the place.

The original parts of this factory were originally built circa 1793 and were occupied by a pottery firm called Davenports, they actually had another two factories around the area. Around 1891 the factory was taken over by W & E Corn and then just over a decade later Price Bros bought the factory. In 1961 they merged with Kensington Pottery to form Price and Kensington Potteries Limited, which became a fairly well known pottery company, especially for their tea pots.

In October 2003 the parent company went into administration due to financial difficulties. Not long after the Price and Kensington brand amongst others was scooped up by a company called Rayware who moved all production abroad.

Further history and examples of the ware can be found here: thepotteries.org

Similarly to the Spode works in Stoke this is a good example of a pot bank that has grown organically over the centuries as opposed to other potteries that were planned out like the nearby Middleport Pottery. You can see this in the various contrasting architectural styles that have been used and also the cluttered make up of the site. There are buildings from centuries ago, right through to newer buildings constructed in the second part of the 20th century. The main frontage and the remaining bottle oven on the site are both listed structures, although this doesn't seem to be affording them any real protection as the whole place is in very poor condition, and looks like a slight breeze could send it tumbling down.

In the early 2000's as part of a wider project the Middleport Waterfront Townscape Heritage Initiative, the bottle oven amongst a few other parts of the site were restored to a good condition. However, most of this seems to have now been undone due to years of neglect ever since. There have been numerous development proposals to make use of the site, but none have come to fruition as of yet. Maybe someone with some ambition can come along and do something good with it, there's certainly plenty of scope, it will just require imagination and plenty of cash.

A 1964 image of the factory, the left hand bottle oven has been demolished. The more modern building is now the location of the table top sale place, but I believe it once contained some large kilns. Image taken from Staffs Pastrack 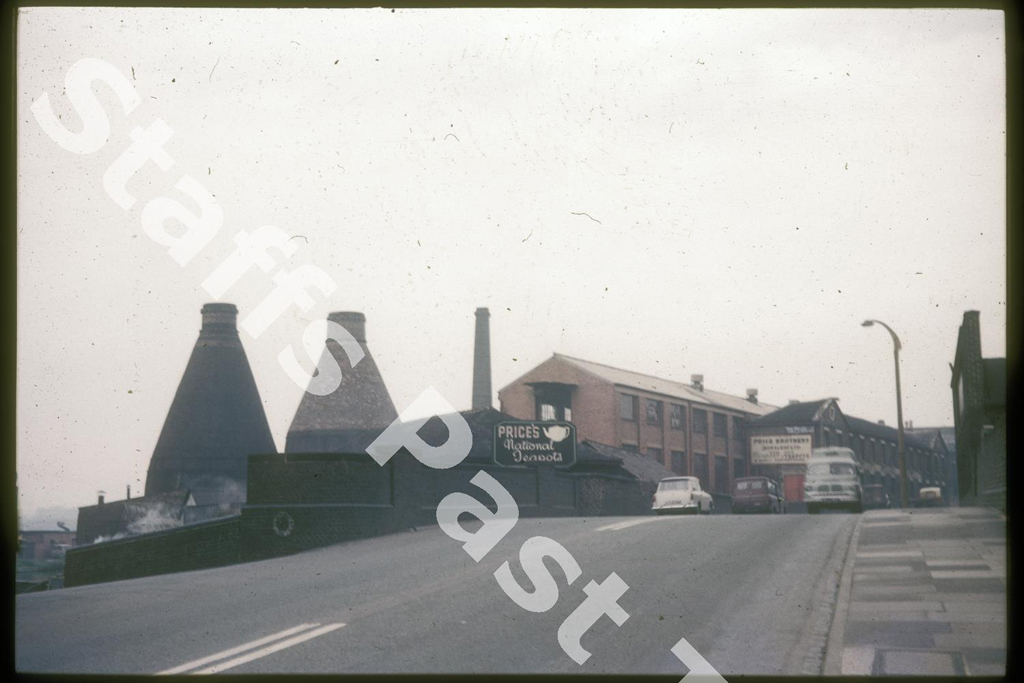 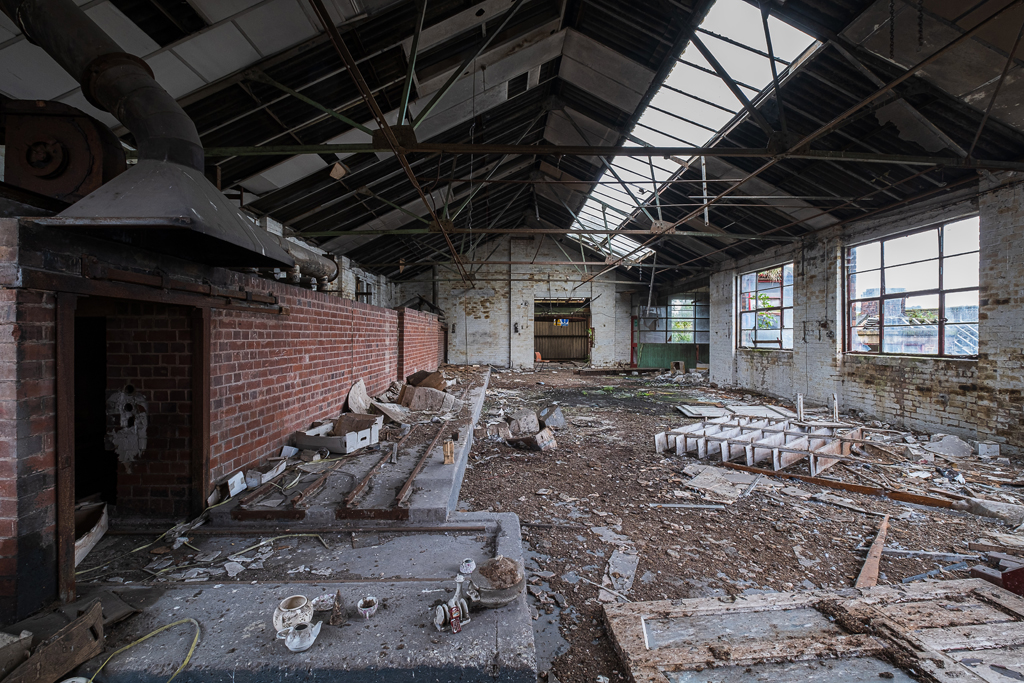 Through this opening there is the track of an overhead conveyor that was used to transport the ware between various parts of the factory. 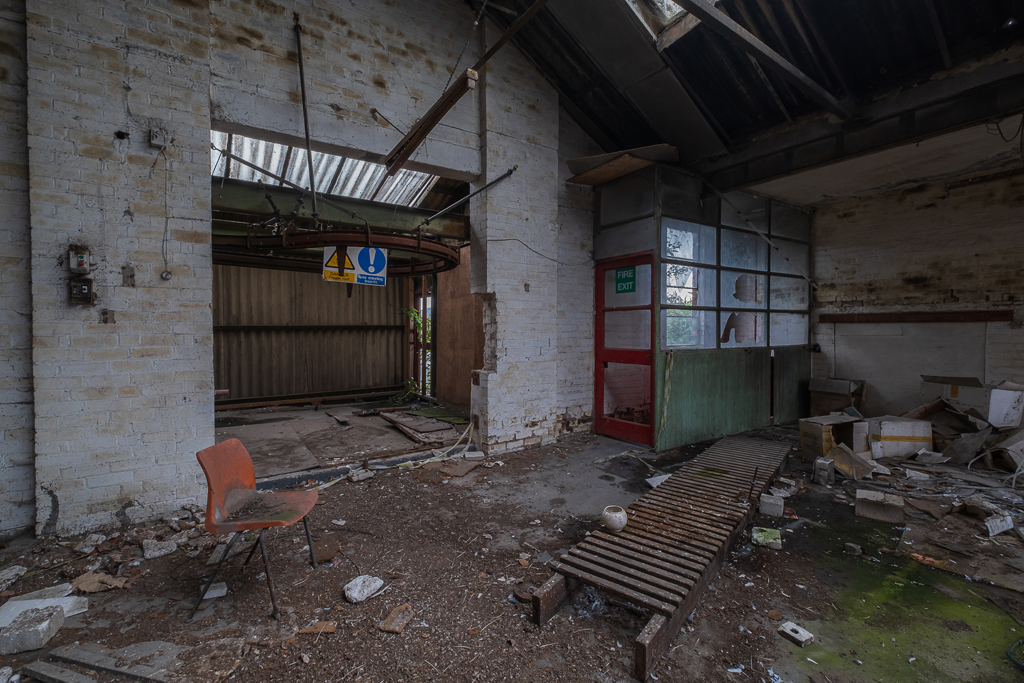 The aforementioned conveyor passes through these structures across the roof. 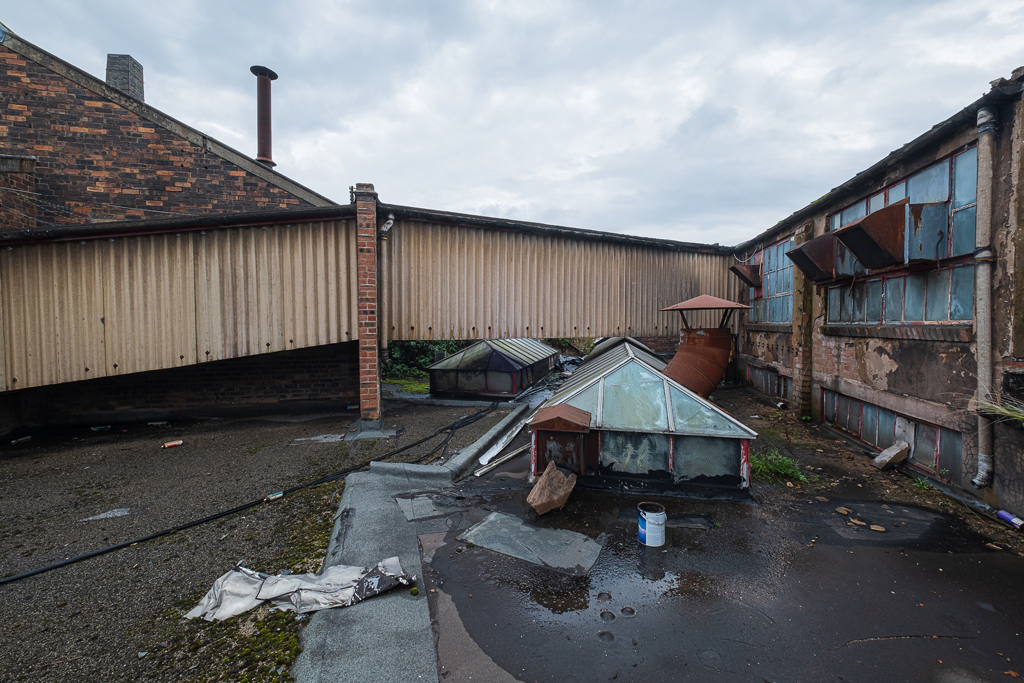 There were several boxes containing a mixture of Royal Doulton and Steelite pieces, I can only assume that it is left over stock from a pottery sales company called Ceramics International who occupied the buildings in the 2000's. 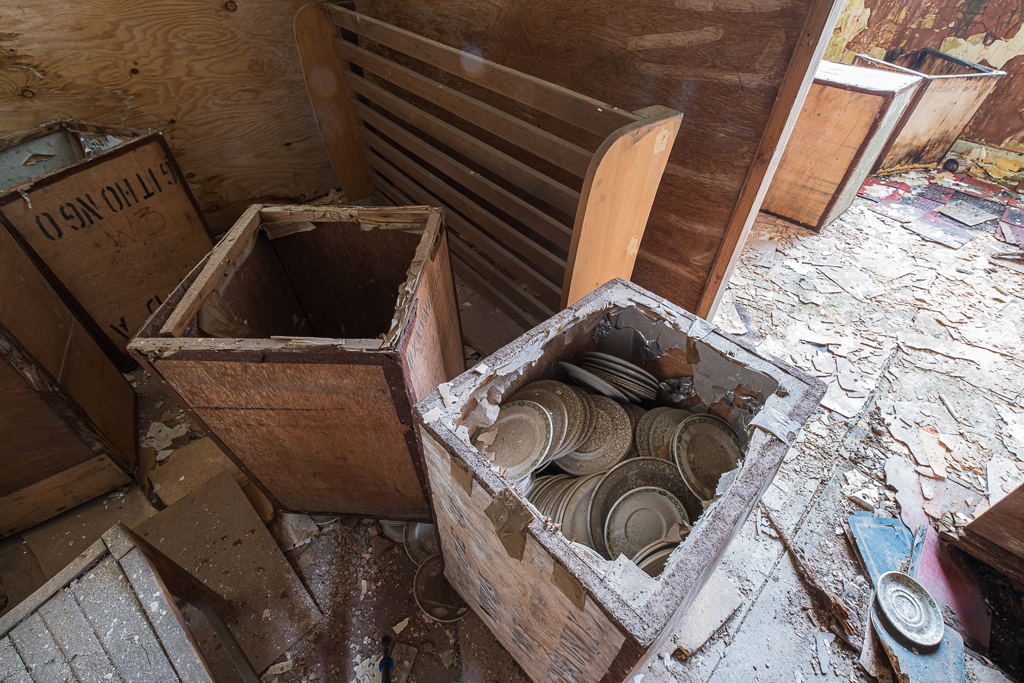 An older part of the works which looked to have been disused for a considerable amount of time. The Rediffusion speakers were quite nice, presumably these were to inform workers of shift change/breaks etc. 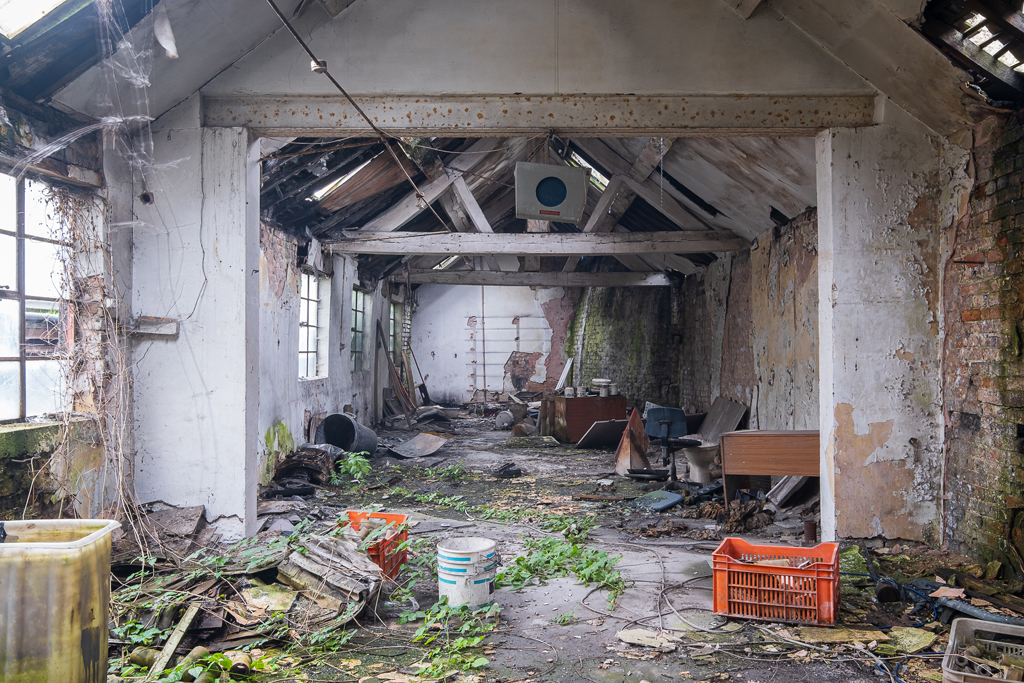 In these old parts there were various bits and pieces on the floors including some kiln furniture and also some old Price and Kensington ware. 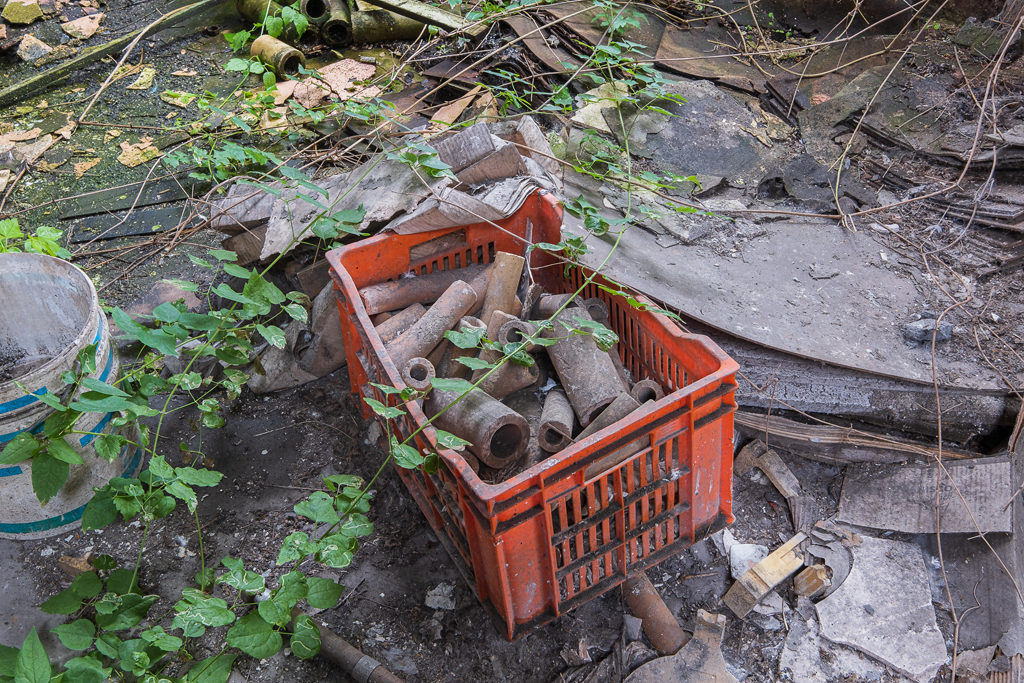 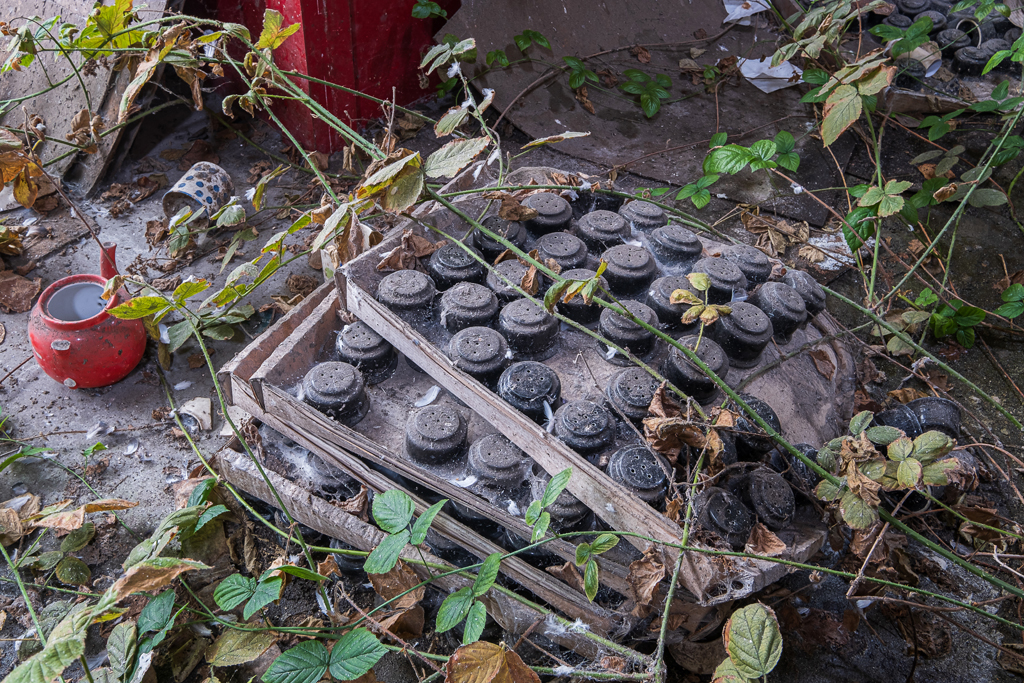 The red railing is around a blocked up stair case. The shelves to the left which incidentally are worth a lot, would have held moulds. 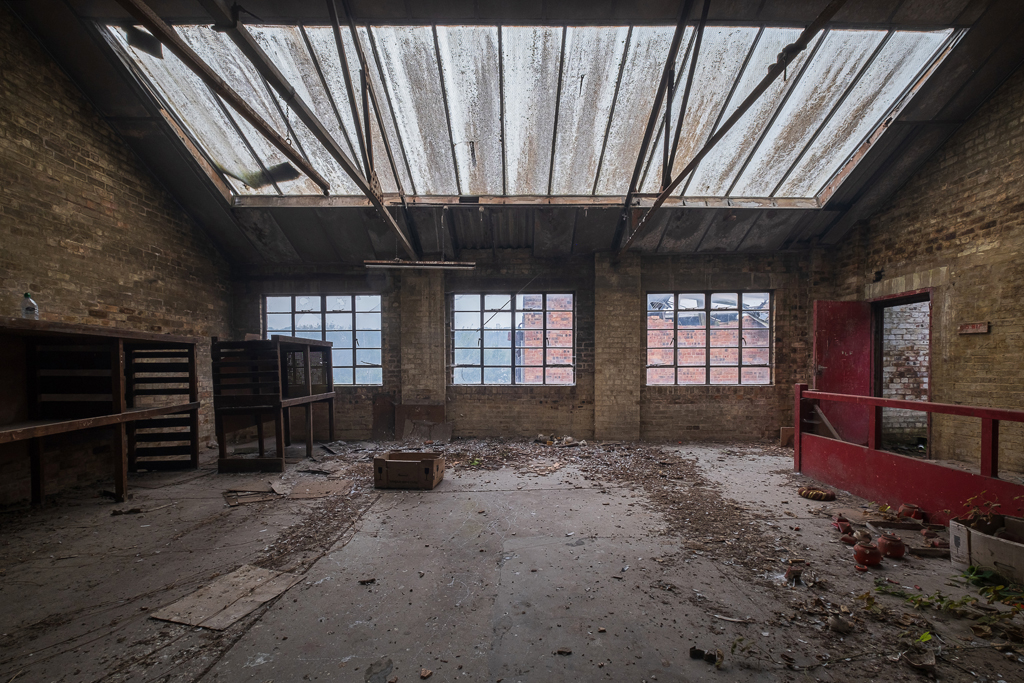 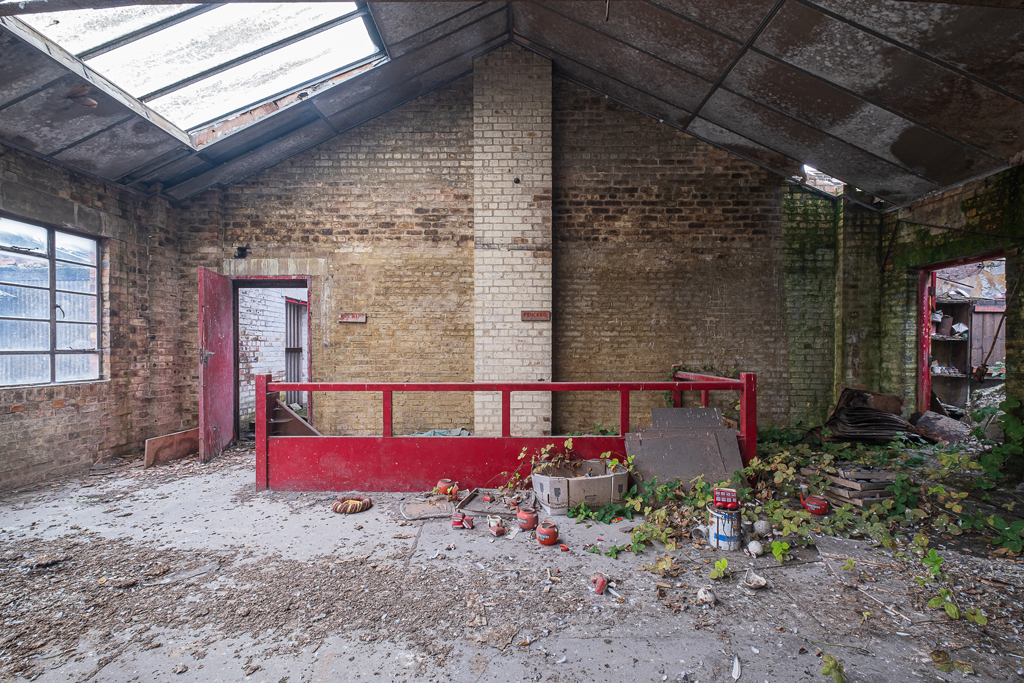 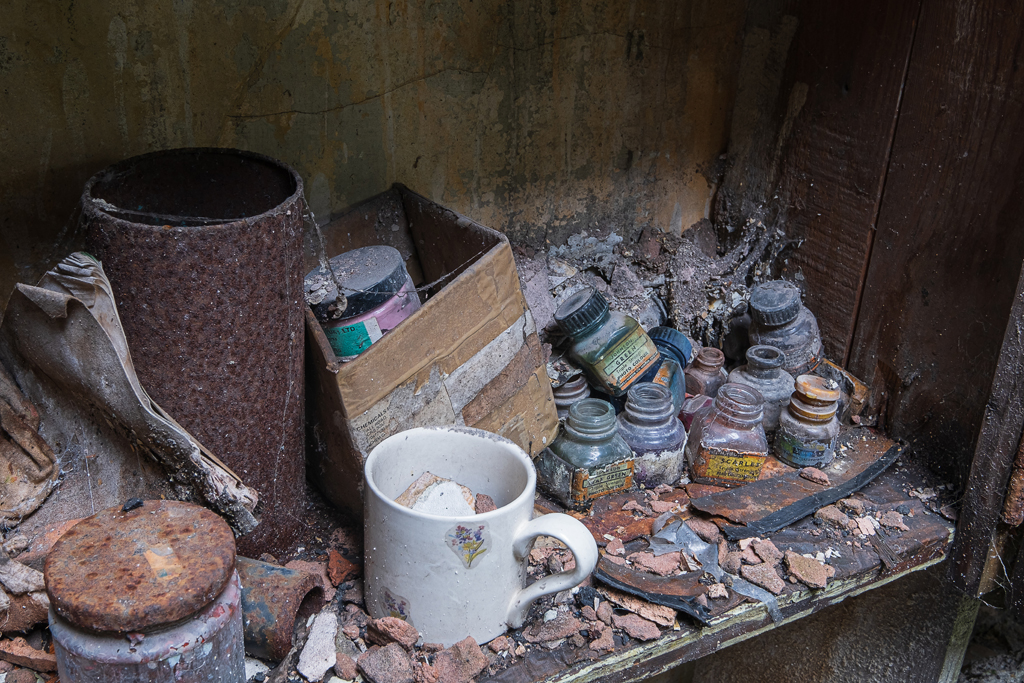 Looking over the top of the factory, it's very overgrown. 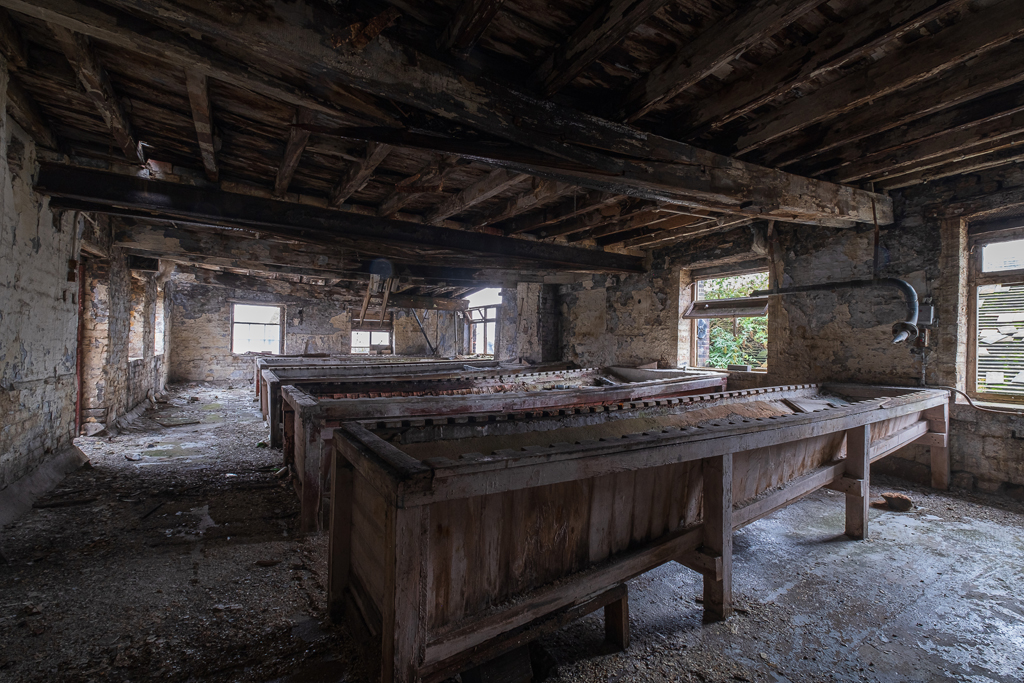 A variety of moulds. 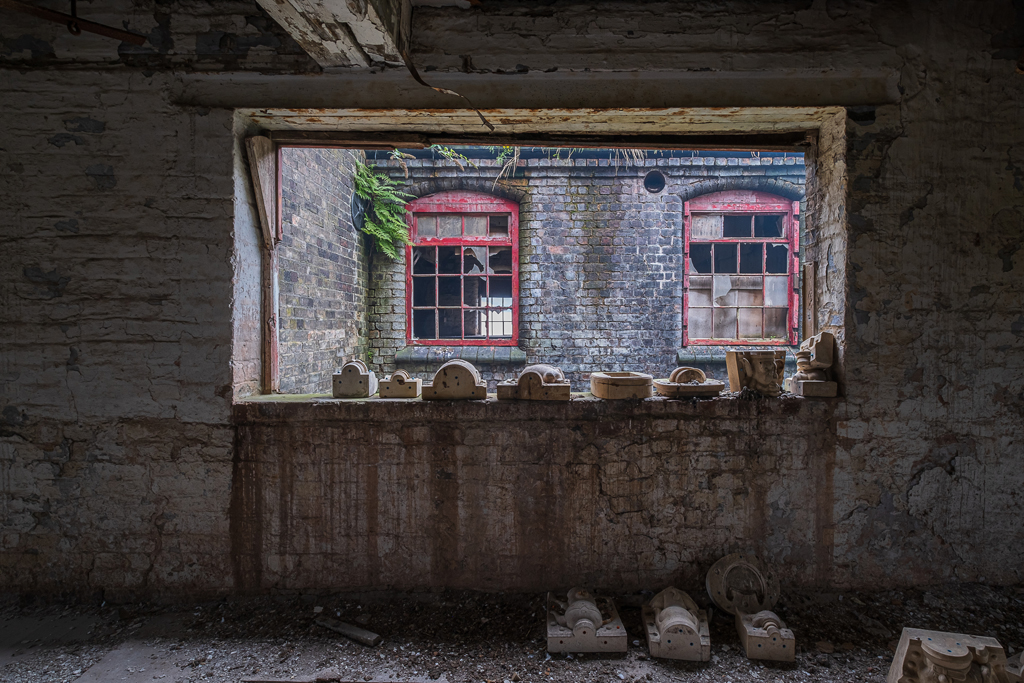 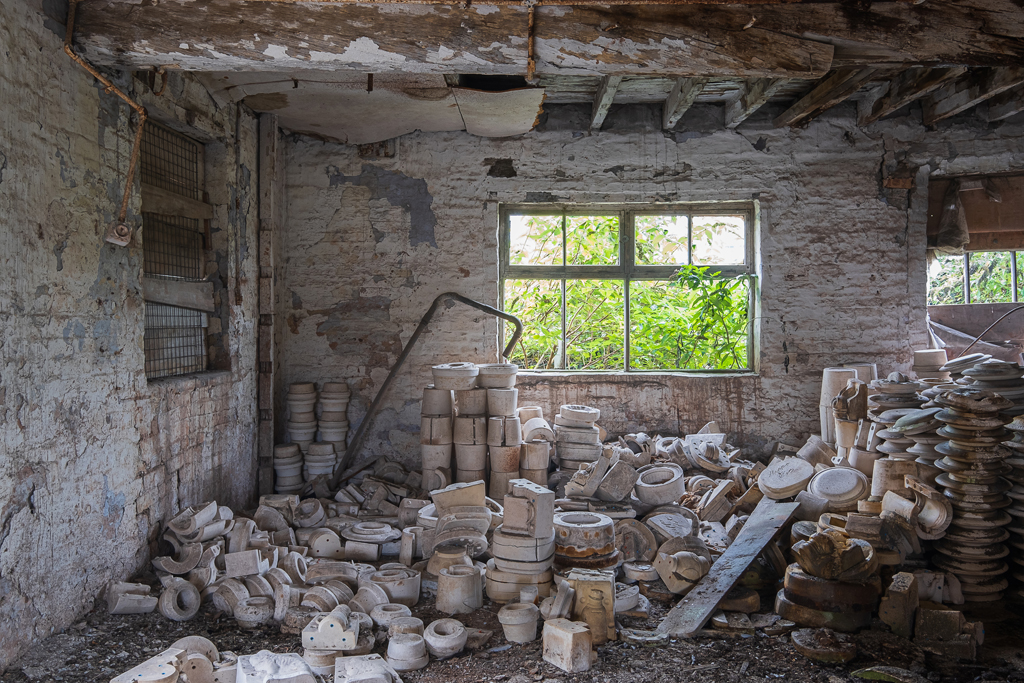 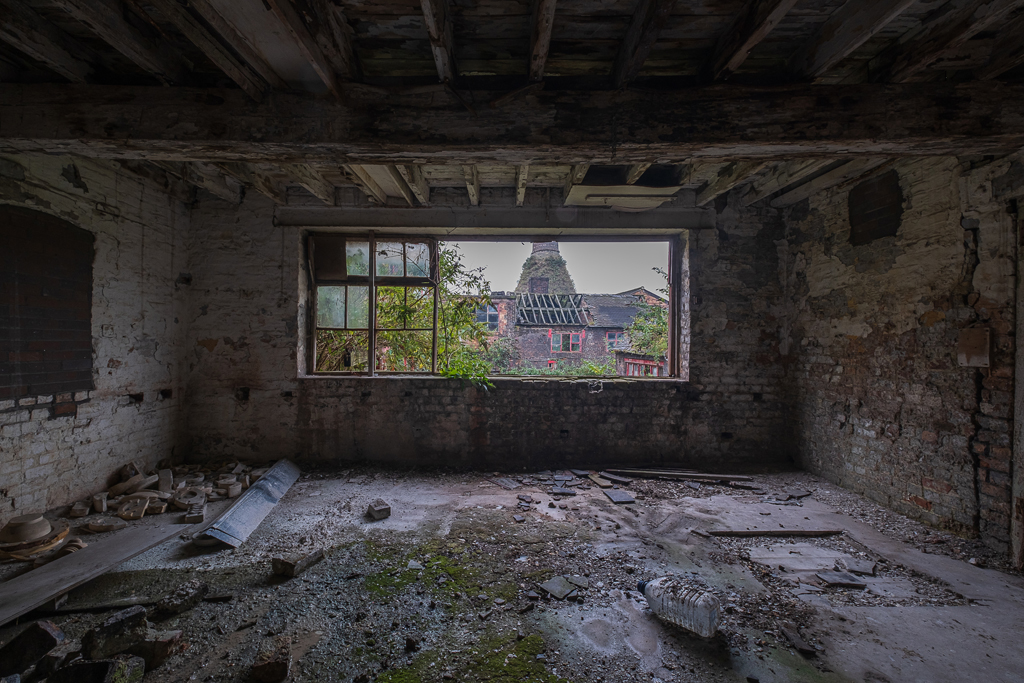 Transfers for commemorative products from the 1982 Football World Cup. 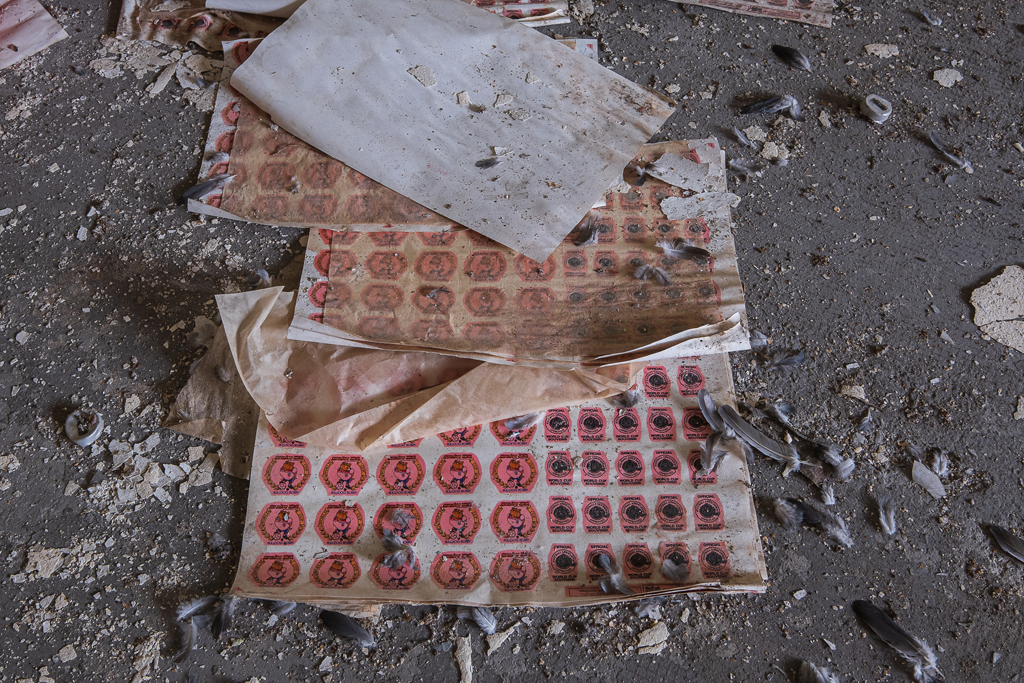 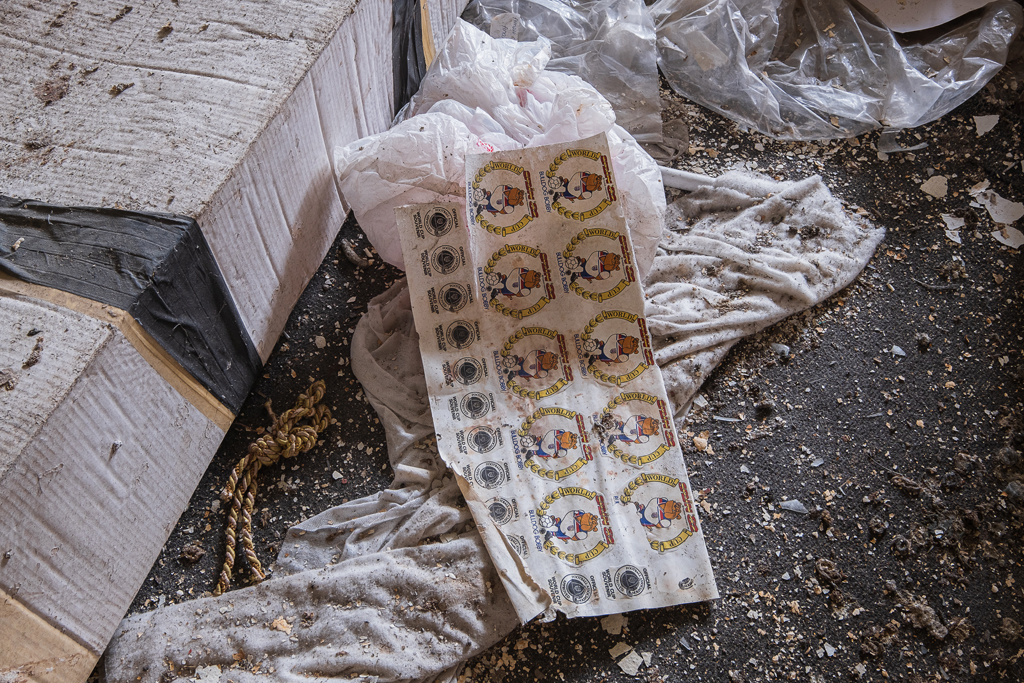 My favourite bit of the place. These dryers were quite unlike any I had seen before, certainly much older, they looked almost DIY. At high level there were the remnants of an old belt drive system and also many more moulds. 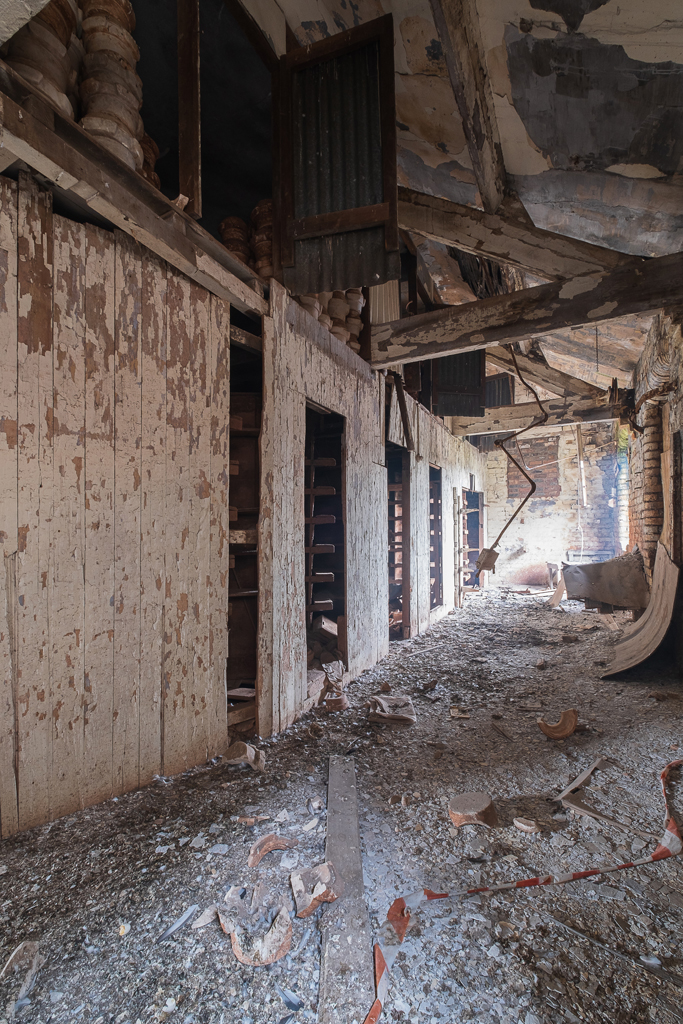 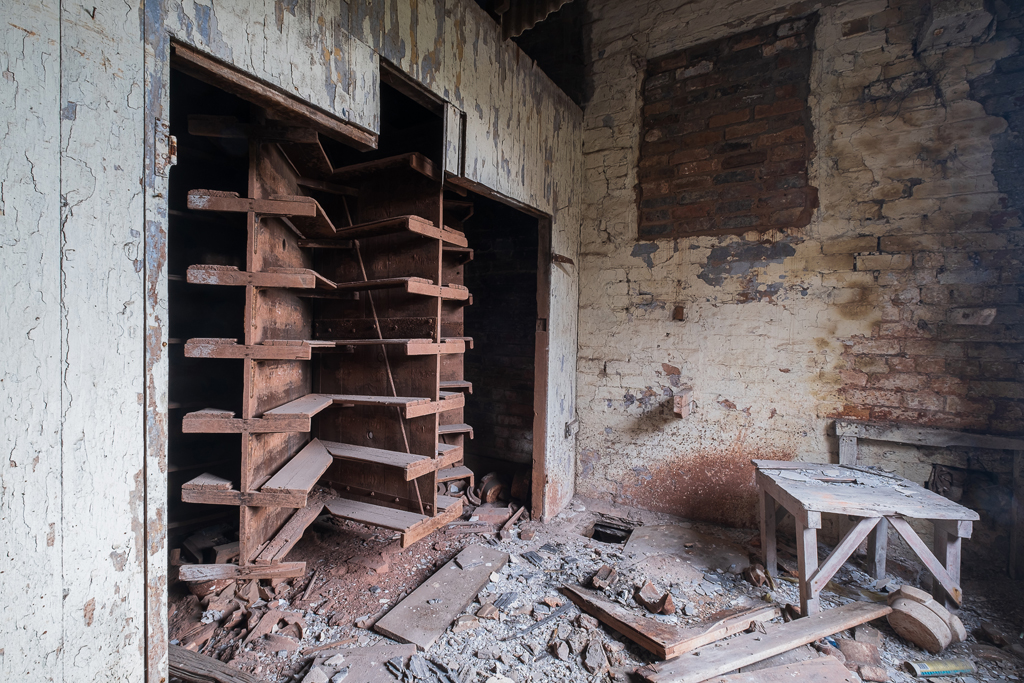 A nice view of the works from the canal. The large chimney was also restored in the scheme I mentioned before, I assume there must have been a steam engine on site historically. 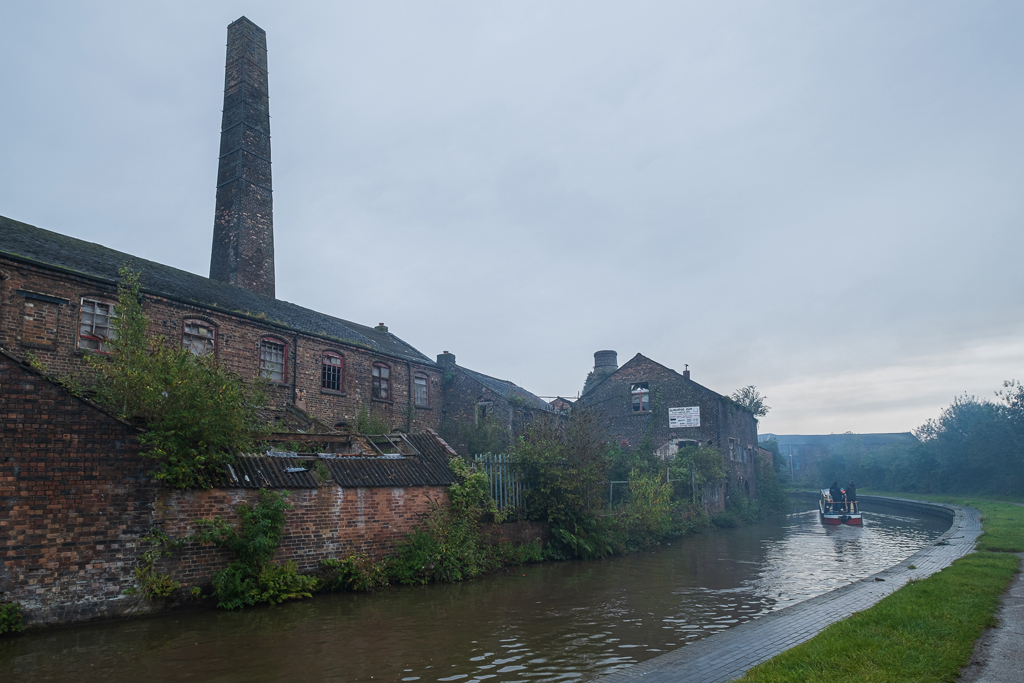