Also some other random stuff, see the menu above. " itemprop="description"/>
Home » Exploring » Stoke-on-Trent Workshops for the Blind - September 2019

Stoke-on-Trent Workshops for the Blind - September 2019 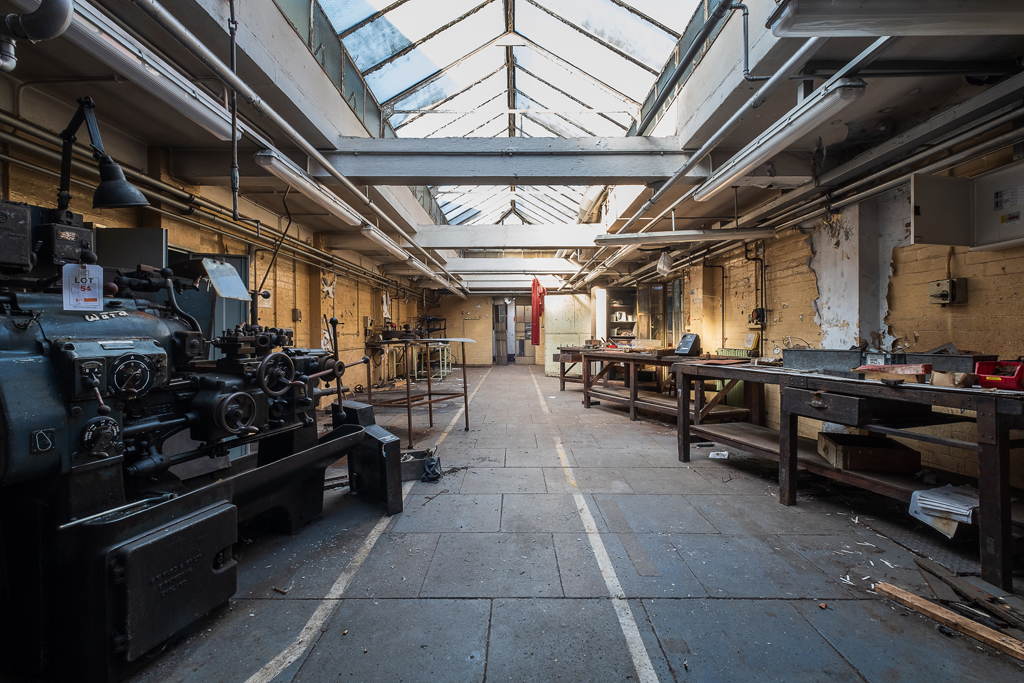 The Workshops for the Blind were closed in 2013, naturally it was straight on my radar, especially with it being a nice old art deco style industrial building (my favourite). However, since closing it has had very tight security and therefore has taken lots of persistence but as always it has eventually paid off. Inside it is in relatively undisturbed condition with lots of nice decay. Shortly after the closure a lot of the equipment was auctioned off but despite this there is still plenty to see. Regardless of what the buildings contain it is very photogenic just down to the architecture alone. As was common with the era there is plenty of natural light (via a combination of large windows, north lights and roof lanterns), along side this there is liberal usage of hardwood parquet flooring. Sadly over the years there has been quite a lot of modernisation and this has lead to the loss of the nice clock from the frontage, a change to modern plastic windows in many locations and most of the signage is also fairly new.

Early in 2018 the council announced plans to building around 64 'high quality' dwellings on the site as part of a £8.9 million investment, the proposals suggest that the frontage of the building would be retained, but I would probably take that with a pinch of salt given how things tend to go normally. Fingers crossed though as it is a lovely looking building.

Stoke has certainly served us well over the years with plenty to see and do, for the time being at least it does continue to deliver.

I know a number of people have been interested in this one for a while, so I hope you all enjoy!

Brief history and archive photos taken from thepotteries.org - http://www.thepotteries.org/photo_wk/182.htm - Built on the site of the former Rialto Pottery Works and operated by Stoke-on-Trent City Council. - Designed in the Art Deco style. - The Workshops for the Blind were opened in October 1934 at a cost of of £30,000. - For many years they supplied products to the pottery industry. - In 2009 there were 44 employees. - After a number of loss making years - the works were transfered in 2009 from the City Council to a new owner and renamed 'Stoke Workshop for the Blind and Disabled'. - In 2011 the business was closed, half of the workforce was made redundent and the a new business relaunched at the same premises as 'Stoke Disabled Employment Ltd'.

The Workshops as they looked in 1957. The large "hill" on the right was the spoil tip of Berry Hill Colliery.

An advertisement from 1957, the workshops produced a multitude of different products. 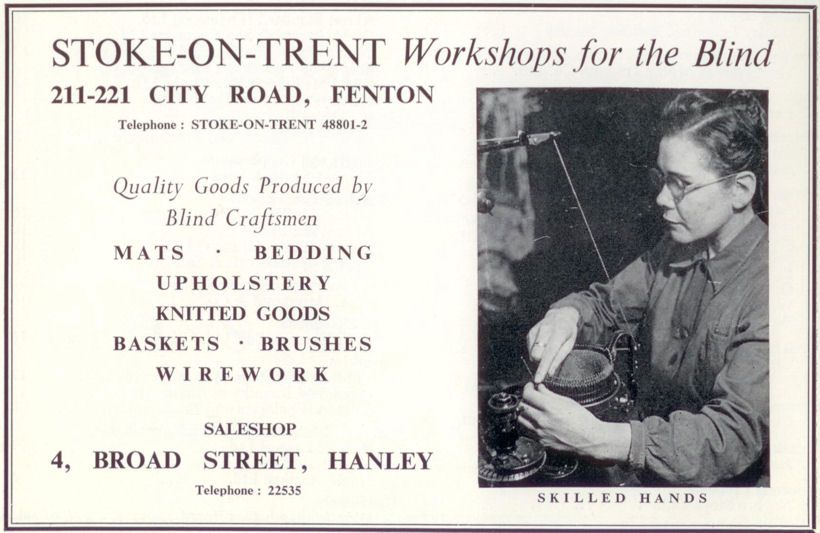 The frontage as it looks now, sadly the nice clock has been replaced with an ugly PTZ dome camera. 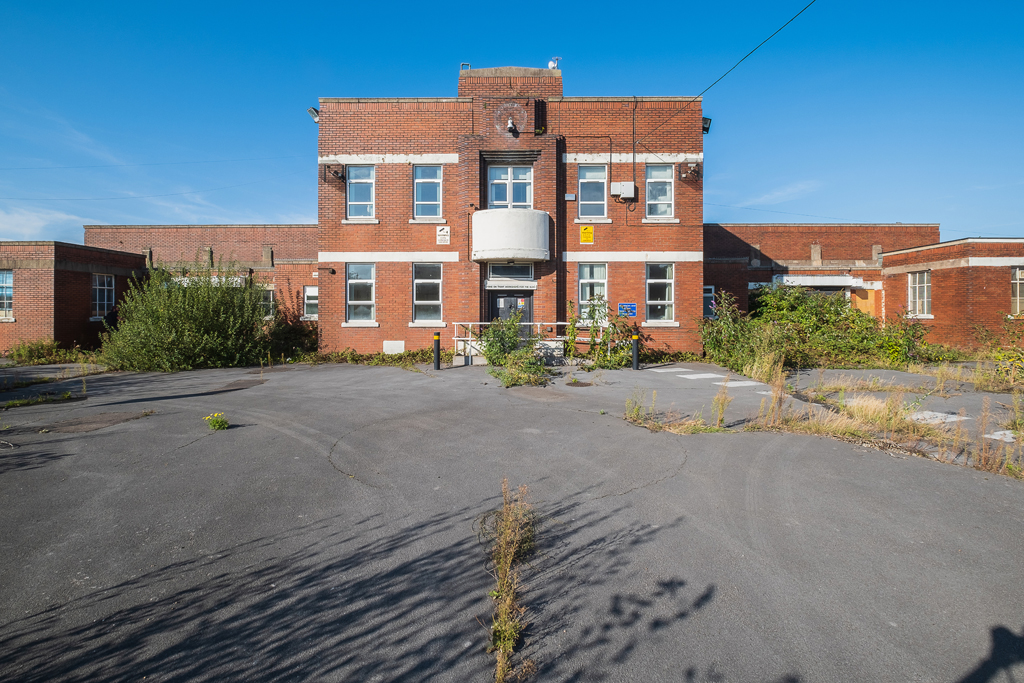 Just inside the main entrance is a nice staircase. The plaque on the rear wall is to celebrate fifty years of the workshops, the certificates are in recognition of products made in the workshops. 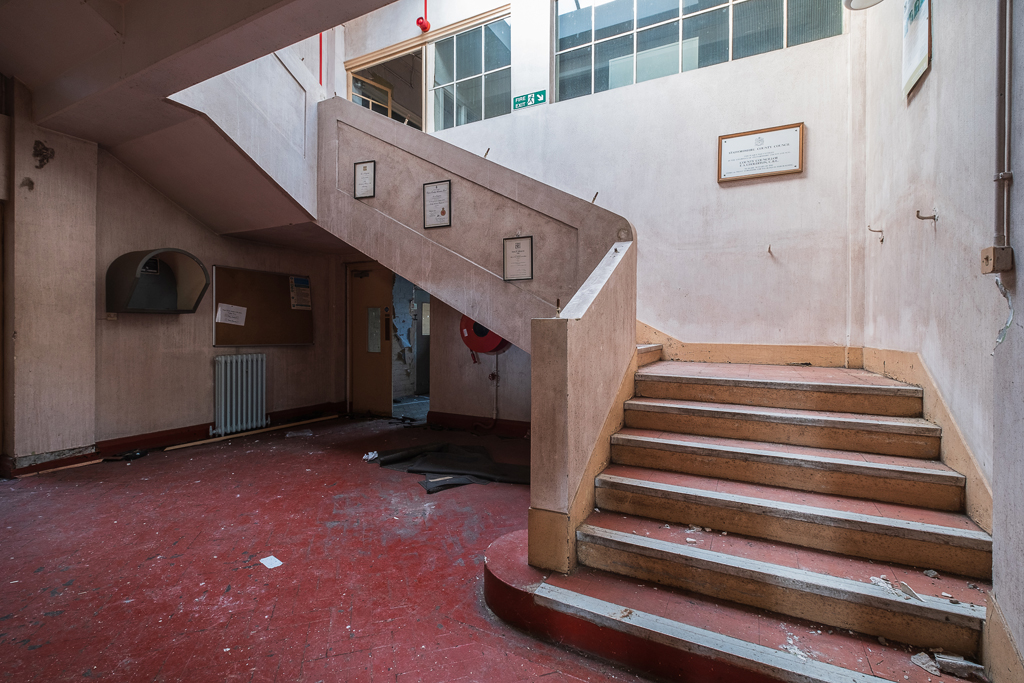 The modernised and fairly uninteresting first floor offices. The windows on the right were originally a pair of doors that opened onto the small balcony. 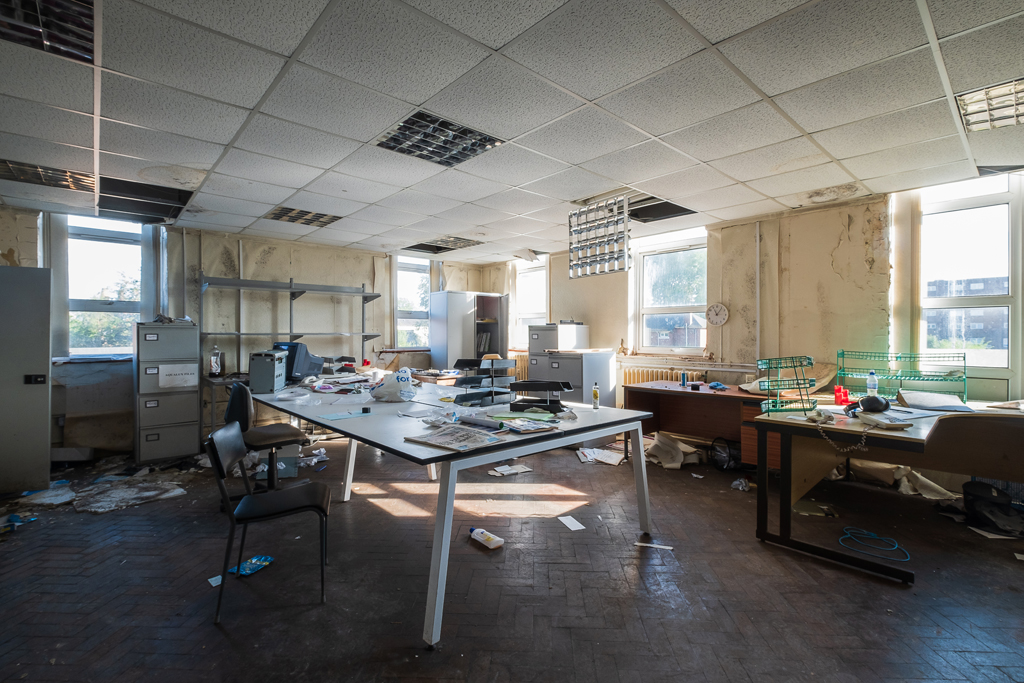 The building has a perimeter corridor with various rooms leading off, many seem to have just been used for storage of packaging materials at the time of closure. 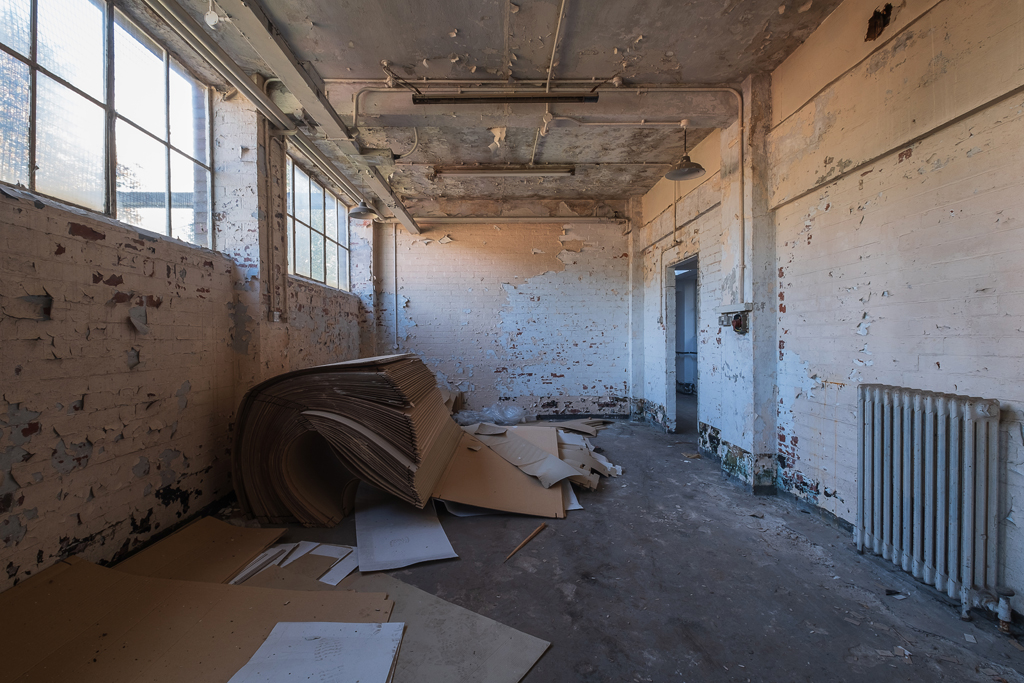 This room was the medical bay, still complete with it's bed. 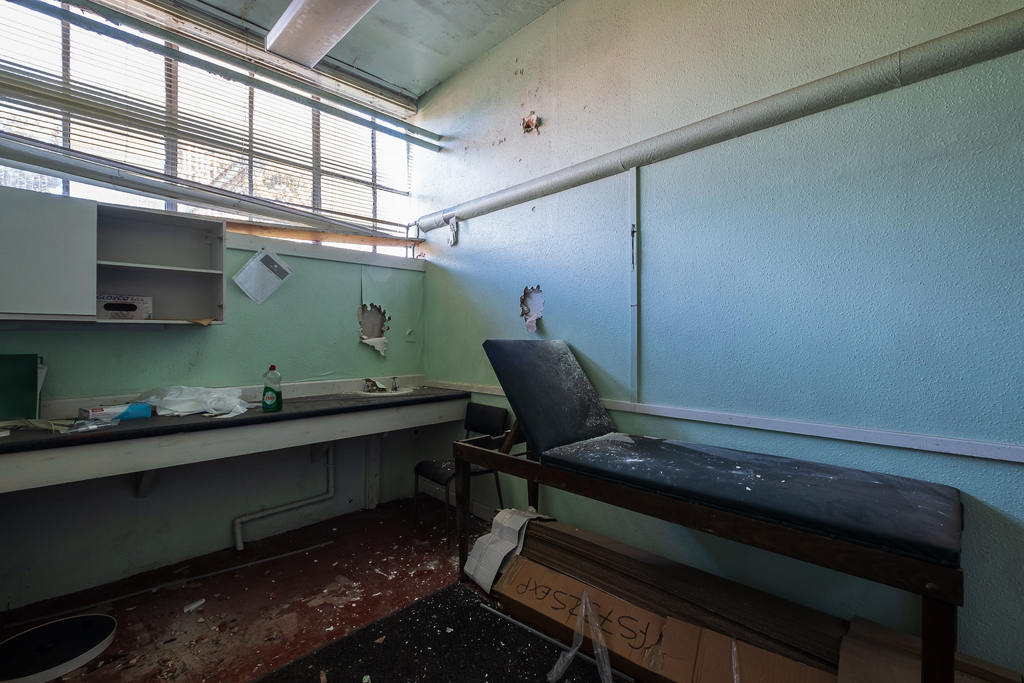 One of the large workshops, this one was dominated by the Adpak shrink wrapping machine. Presumably this whole space was dedicated to packaging of completed products. 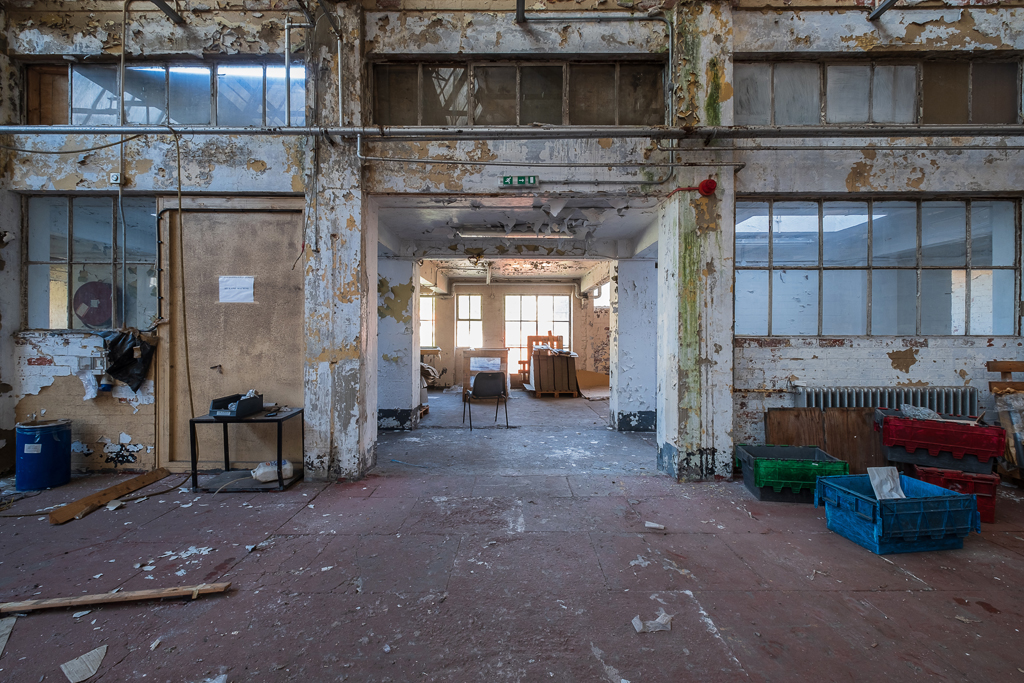 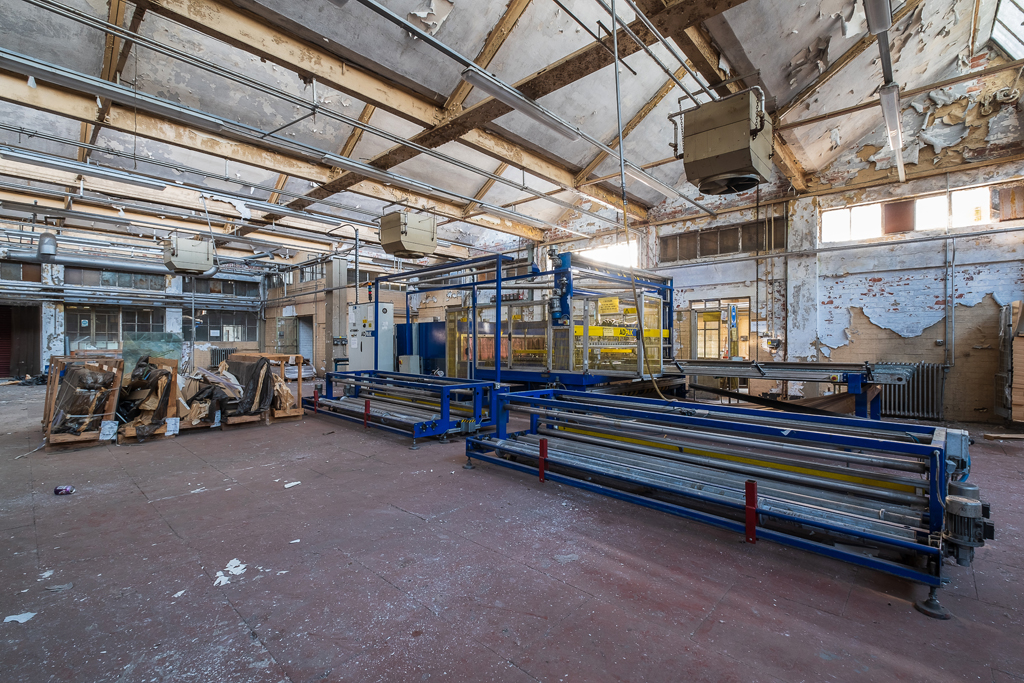 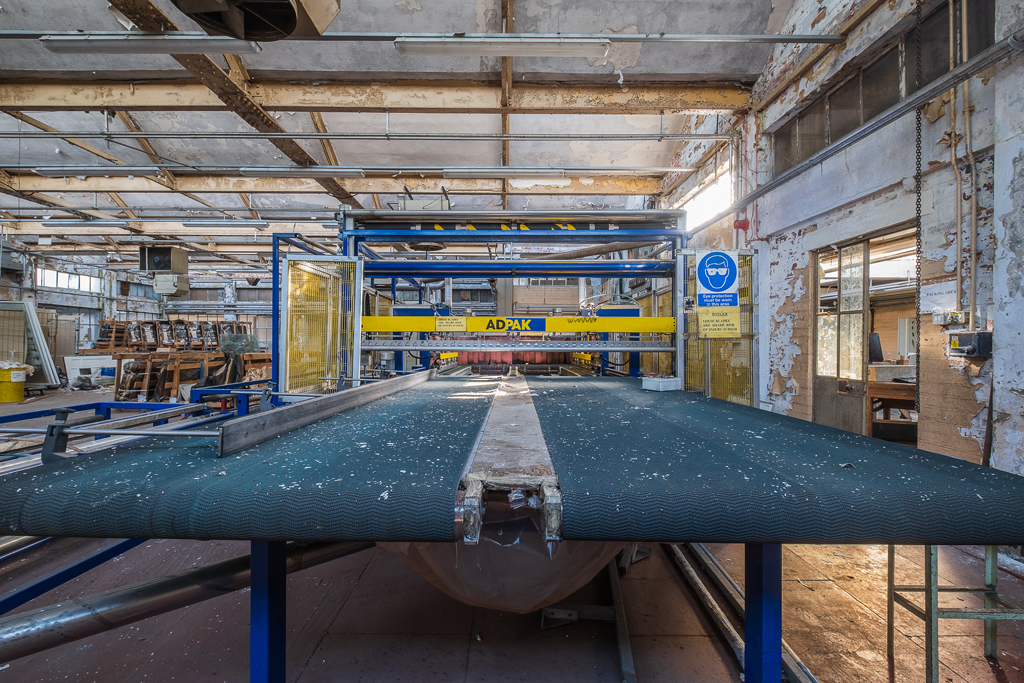 Towards the back of the building on either side are stairs that lead to a storage area. The stairs feature some nice railings, but the rooms were pretty empty. 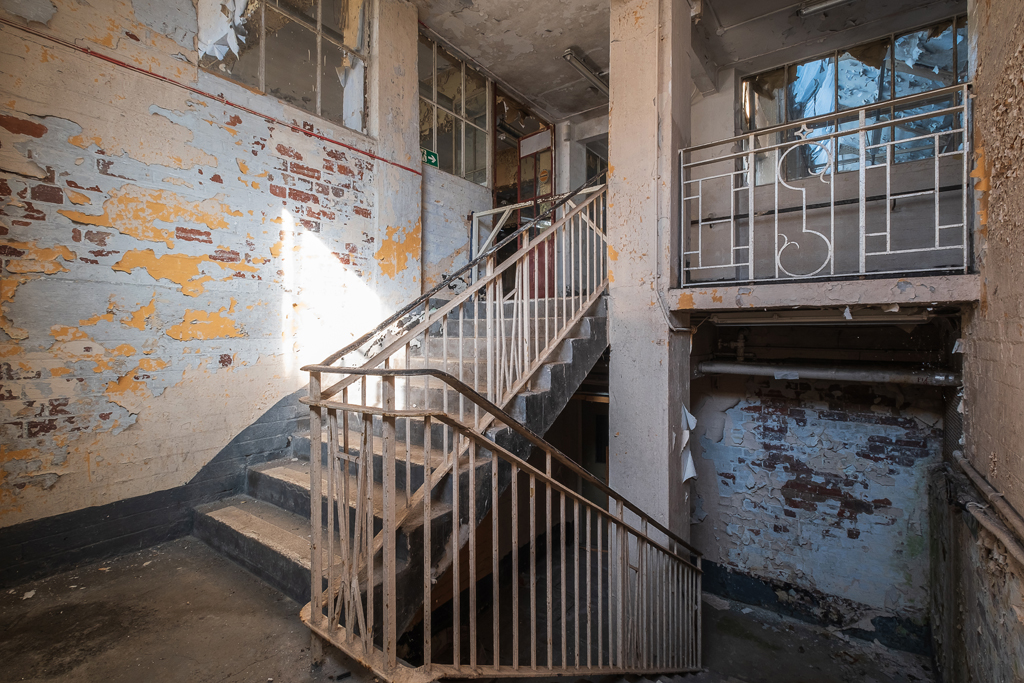 One of the smaller workshops towards the rear. 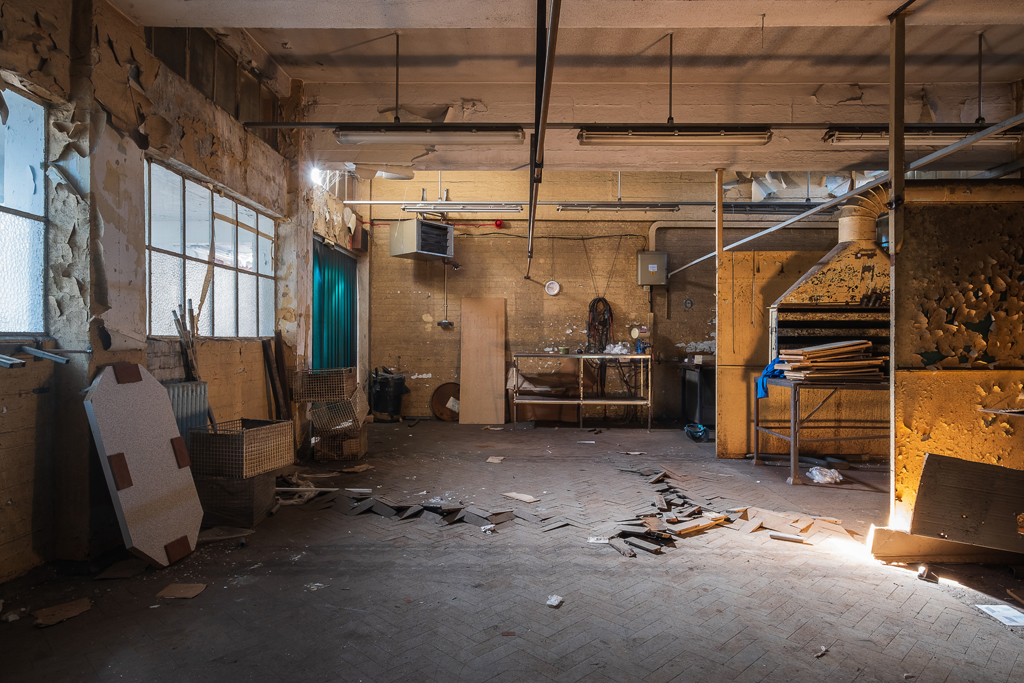 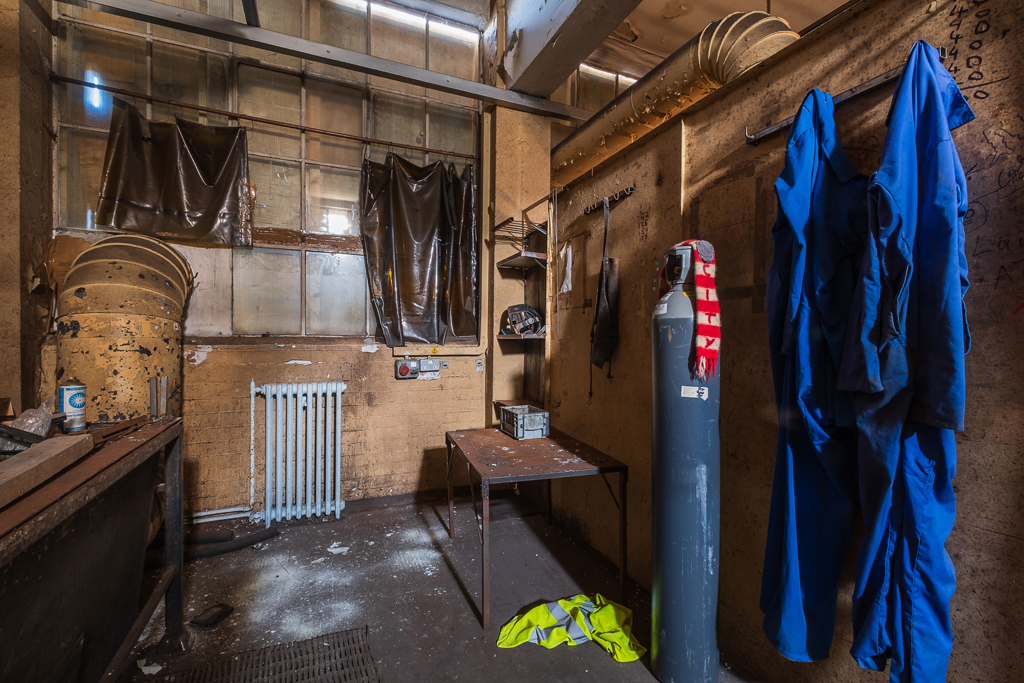 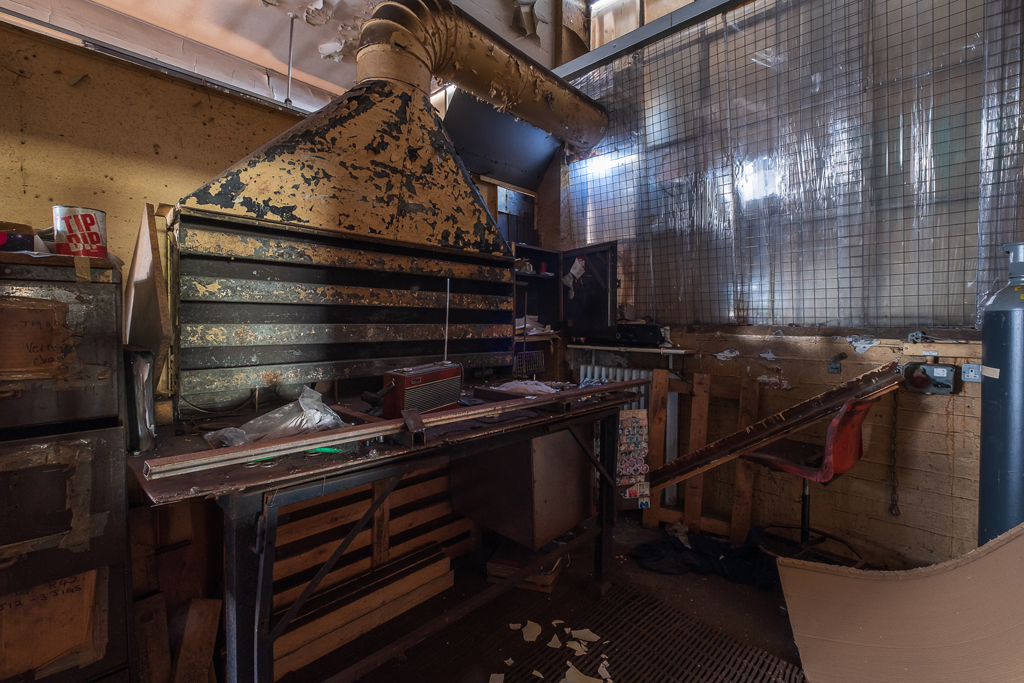 A section of the perimeter corridor. 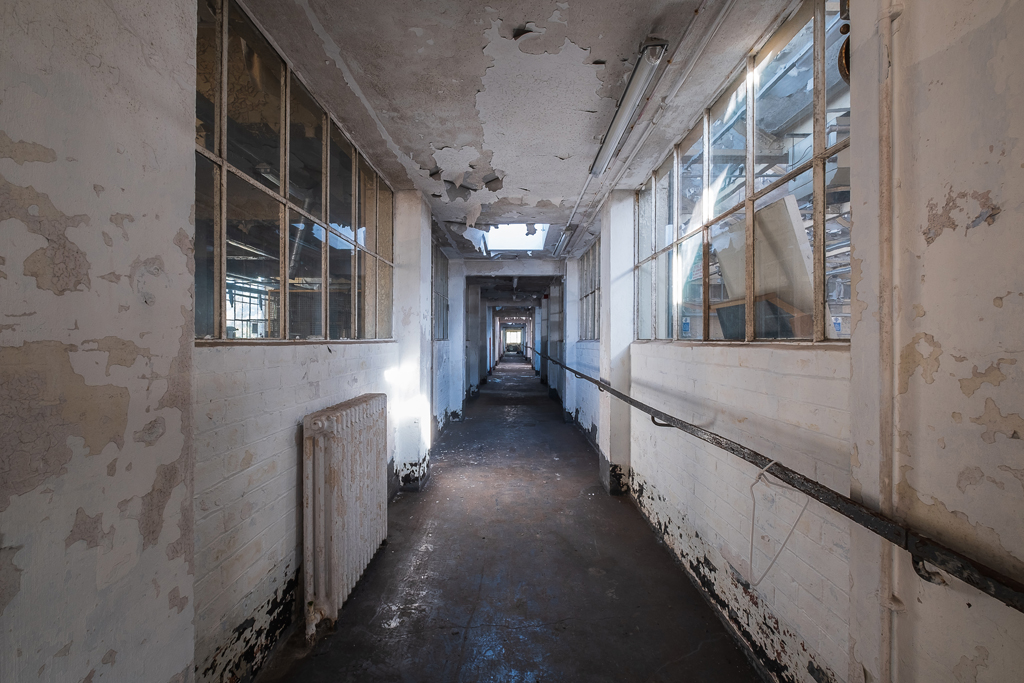 Another of the workshops, which seemed more intact than most of the others. 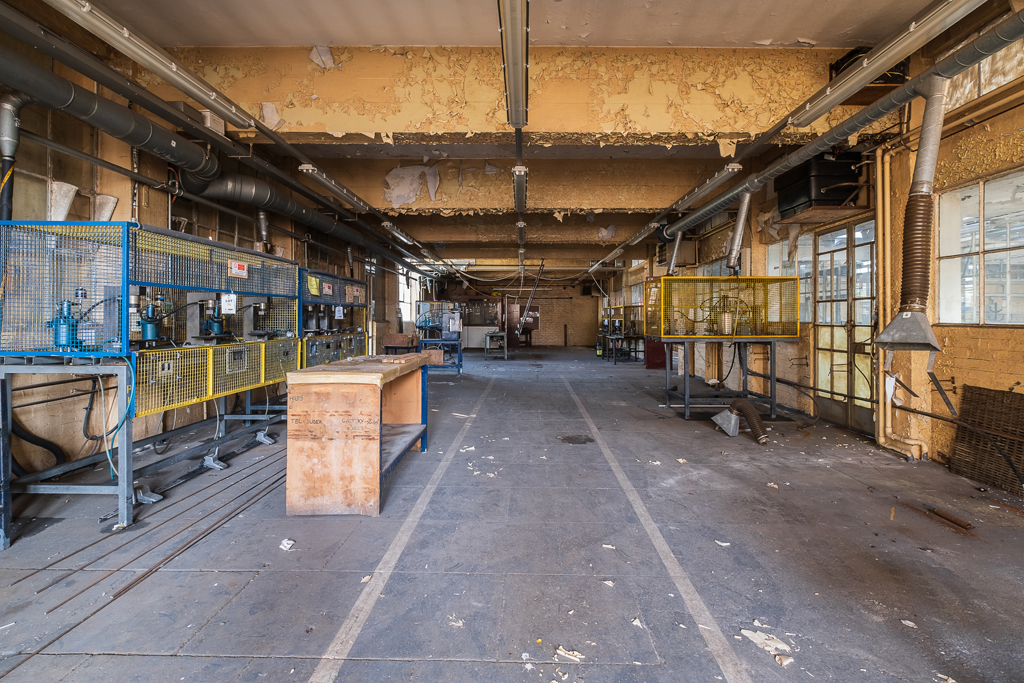 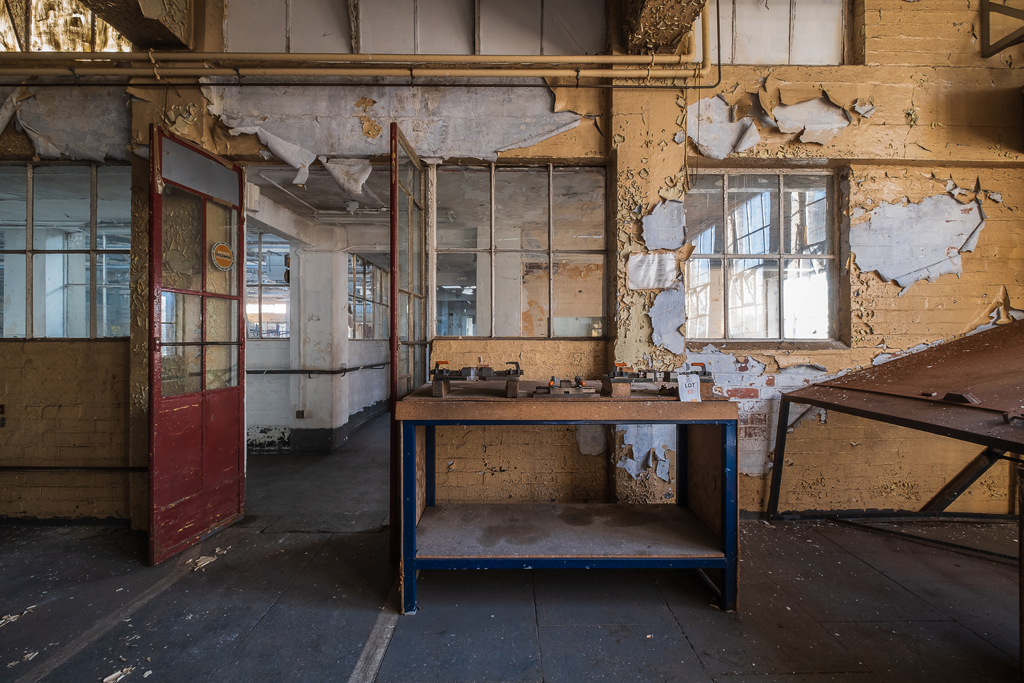 One of the cloakrooms, next door was a locker room. 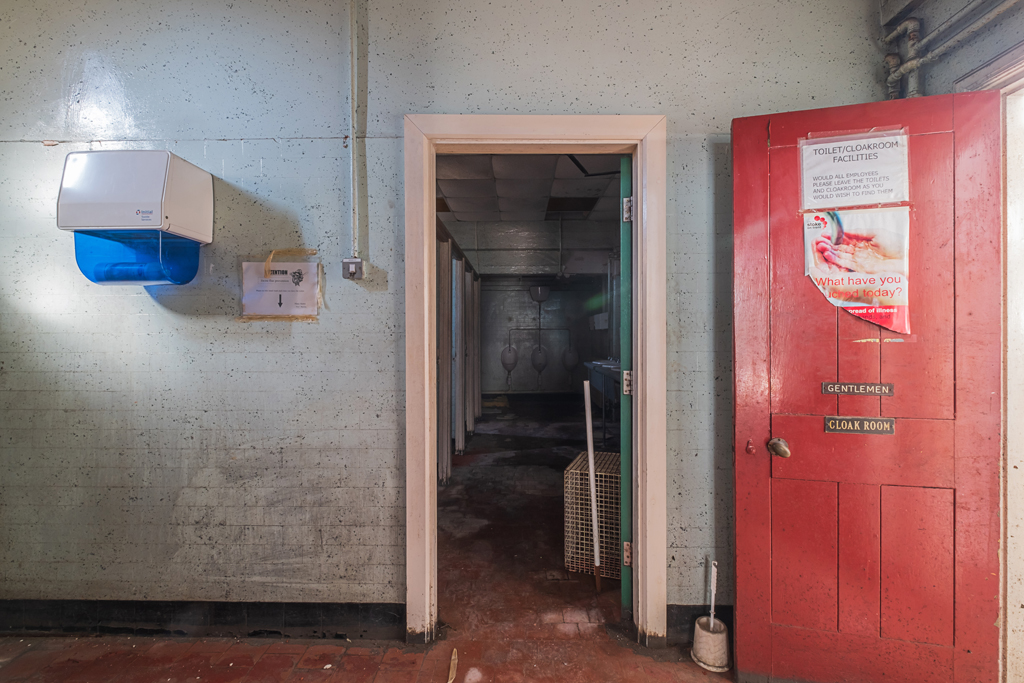 The other large workshop, this one contains a few nice signs and also has racking which still has some steel section. 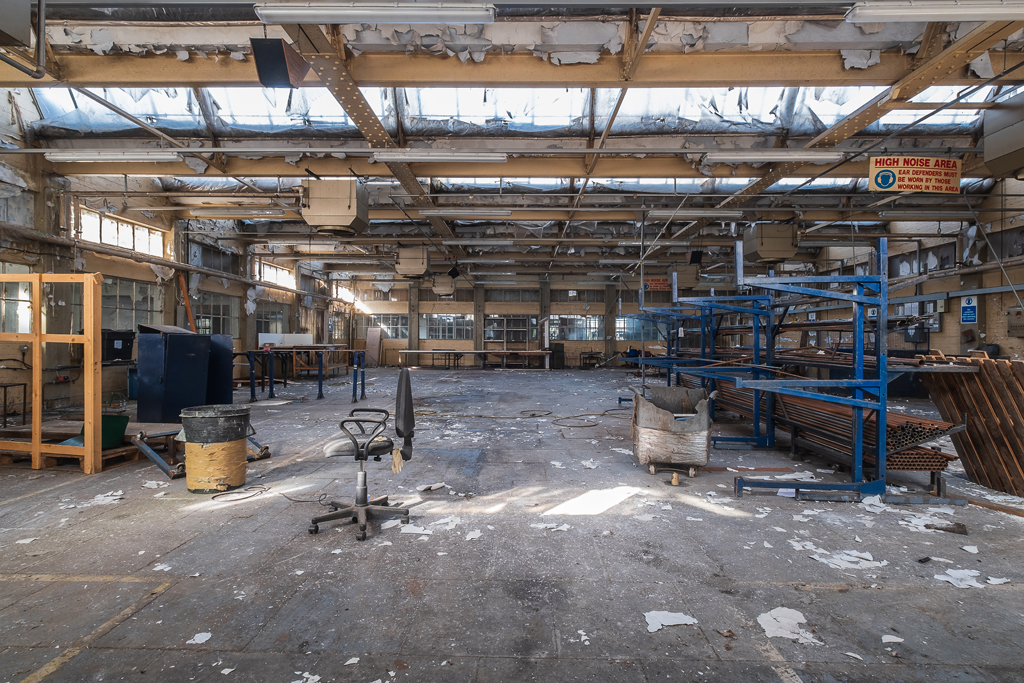 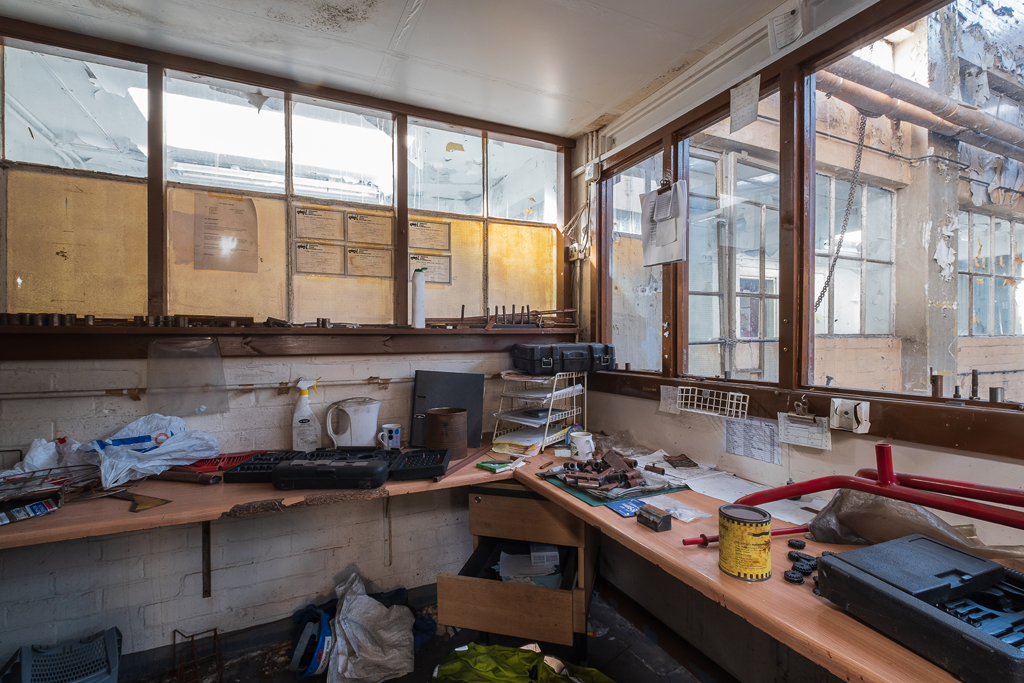 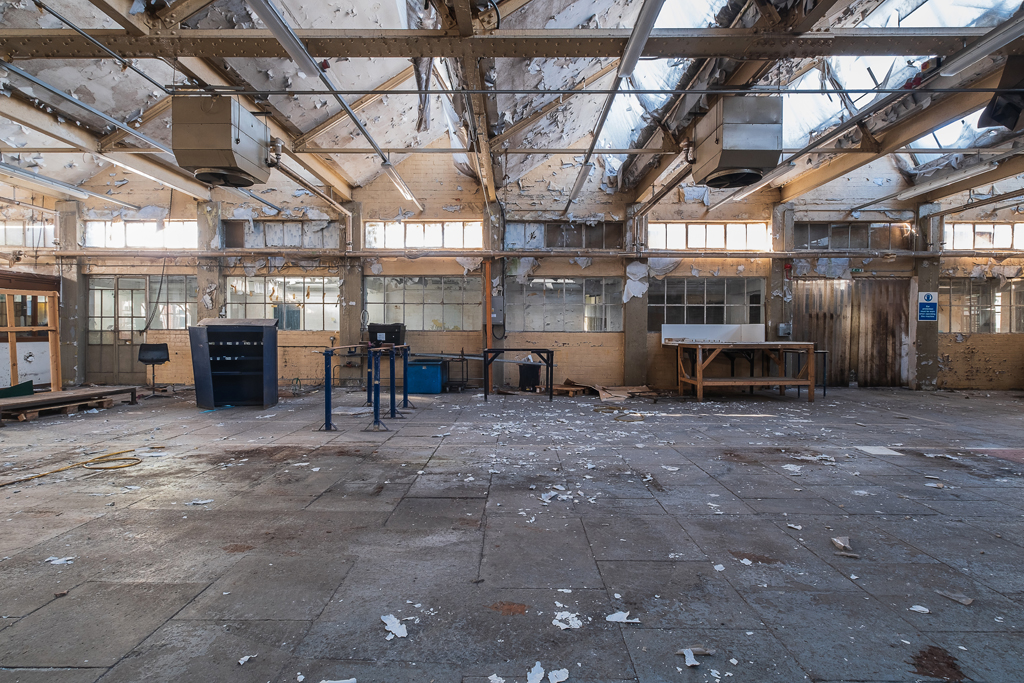 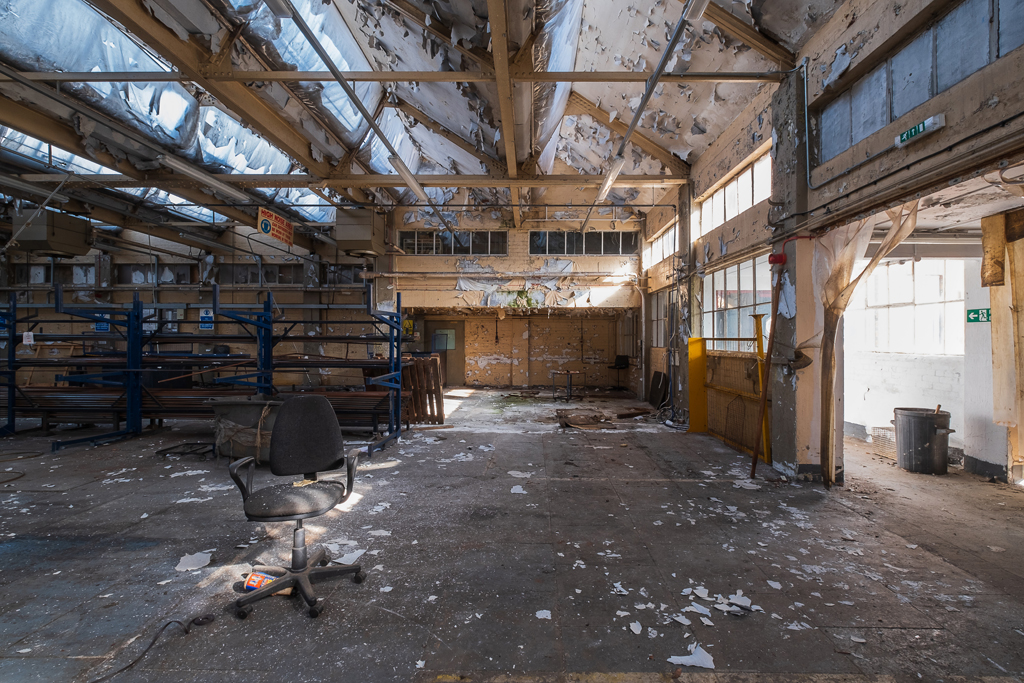 In the centre of the building, a narrow workshop that contains a few benches, a grinder and also a rather nice Ward turret lathe. 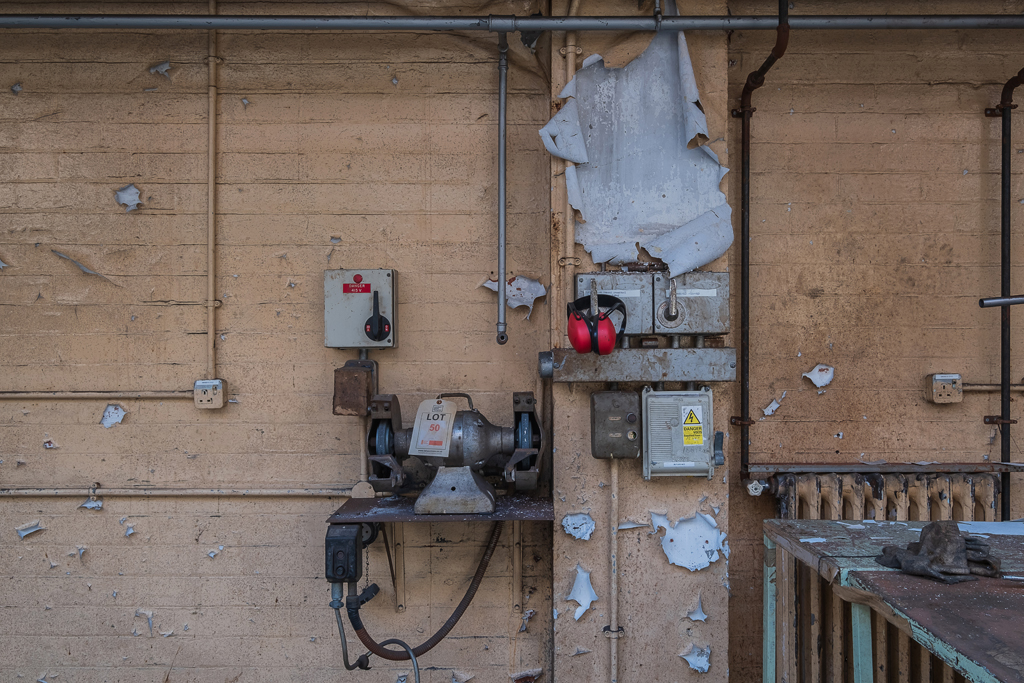 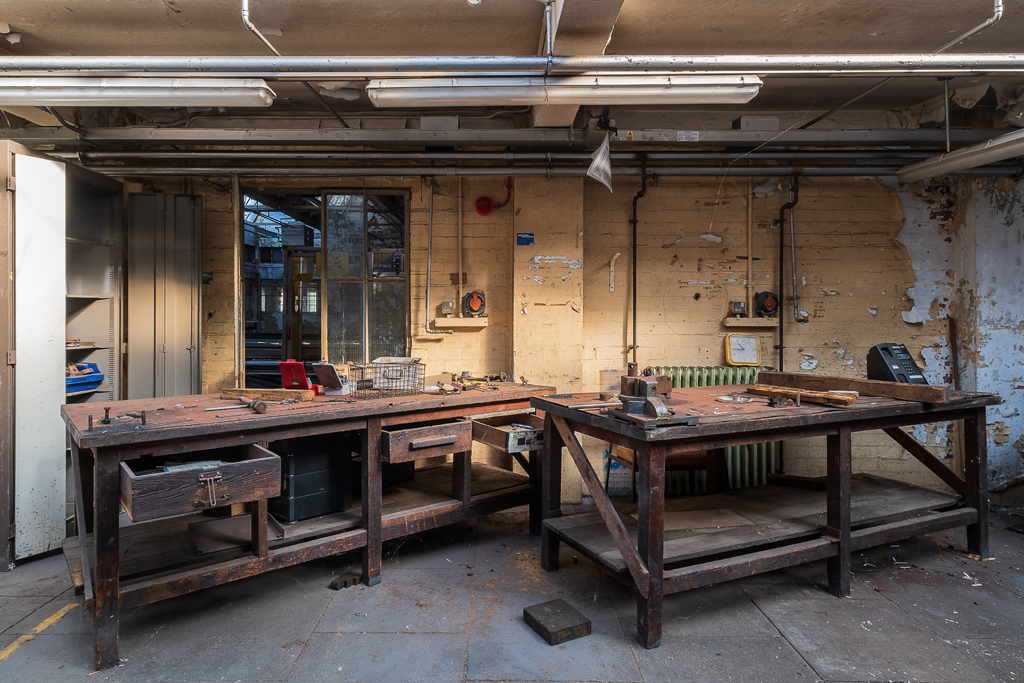 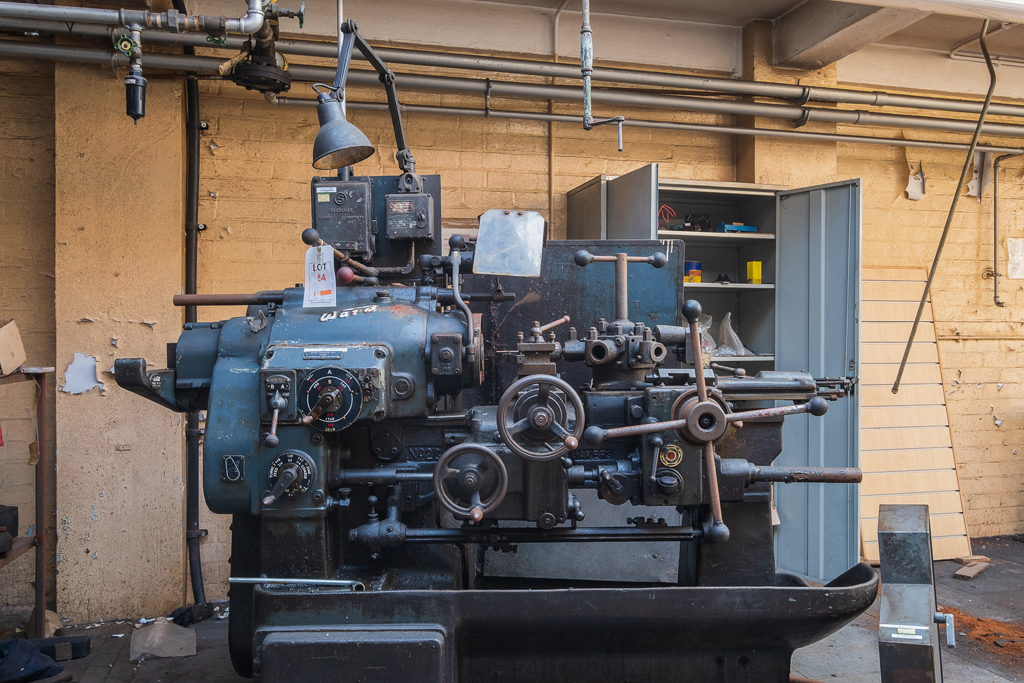