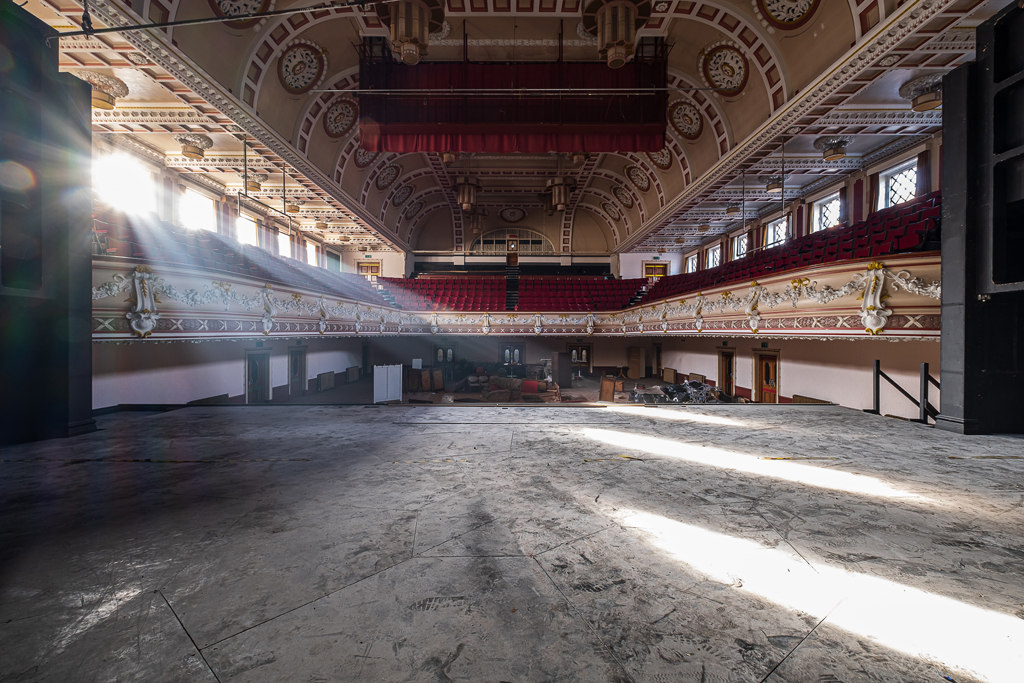 Another of Stoke-on-Trent's municipal buildings that has been left to rot for far too long.

The building was in essence redundant from the day it was built. For those that don't know Stoke hasn't always been what it is today, it was originally six entirely separate towns that were in almost constant competition with one another for several hundred years, it wasn't until 1910 that they formed the federation that later went on to become the city as we know it today. Each town has/had their own town halls and Burslem was already on to it's second, with proposals being drawn up for it's third. It was hoped that this new building would help sway the decision as to where the federations administrative centre would be. Ultimately it was determined that this would be in Stoke, however around 14 days prior to this decision being made the third town hall in Burslem had broken ground. The plans were already essentially finalised for the auditorium portion of the building (Queen's Hall) and this was constructed more or less as planned however the other portion (Princes Hall) was rationalised to reflect it's now essentially unknown purpose and is a much more simple looking building, externally at least.

A decision was made at some point that the Queen's Hall building would primarily be utilised as a theatre/performance venue with the Princes Hall handling a variety of uses over the years eventually being utilised by the local college up until the early 2000's. The theatre was closed in 1998 due to the affordability of repairs that would be required to continue operation, shortly after there was a partial collapse of the auditorium ceiling. Four years later though the leasehold of the building was in the hands of local man Steve Ball and the theatre was brought back into use, operating on an occasional basis for over a decade. During this time the Princes Hall deteriorated following a lack of roof repairs that caused severe damage to the front portion of the building. Eventually this was partially repaired, at least to the point of making the building semi water tight however the interiors were never repaired. In 2014 the theatre again ceased operation and since then has been very infrequently used and once again a lack of maintenance has seen water ingress become a problem, particularly in the Princes Hall side of the buildings. If I recall correctly last year it was announced that the council intended to dispose of the buildings along with dozens of others (explorers at the ready...) to raise some funds - to spend on some vanity projects I'm sure! I've not heard anything since but I can't imagine it's a particularly easy building to sell, it's pretty limited.

A long term feature of the must-get-done list I have of Stoke places, it had slowly been creeping up towards the top of the list. I'd recently caught wind that some of the local goons had managed to gain access and were in the process of splashing it about over social media. Needless to say, I had to jump at it and get it done before it was burnt. Last minute plans one night were made with the usual suspects (@Humpa and @MotionlessMike) and we had a good run around the place, but I really needed to get back during day time as it was just way to dark for my liking when it came to taking photos! Revisited not long after to get those sorted. Frustrated to find that the place is already tourbus central, too many clowns in the building meant we didn't waste much time and simple whipped around the place as quickly as possible before doing one.

I'm glad to hear that at least some decent peeps have managed to get it done fairly quickly (good to see you all, it's been a while) and have at least seen it before it's locked up tighter than ever or trashed.

For anyone interested here is an article with some good information: http://www.thepotteries.org/federation/WR003.htm

A bit of history pinched from my favourite resource (thepotteries.org):

Originally commissioned as a town hall, the foundation stone was laid by Alderman Malkin. It was not completed until 1911, when it became a venue for theatres, concerts and other entertainment, then known as the Queen's Hall. In 1966 it became the permanent theatre for the North Staffordshire Amateur Operatic and Dramatic Society, and was also well known as a centre for local dance during the 1960's. The history of the building (with the abolition of the Council shortly after work had started on the Town Hall) helps to explain the extravagant section of the facade, with the columns and three doors of the left wing being very different to the right wing, which is extremely plain and has its own entrance, though clearly built at the same time. Ashlar faced, brick to rear. entrance block with full height portico divided by 3 pairs of Corinthian columns carrying the entablature, cornice and pierced balustrade. Doorway in each of the three bays, with moulded architraves. This central section is flanked by 2 advanced wings with recessed stone panels in moulded architraves and semi-circular window. Curved parapet to lower flanking bay with oculi. Above the cornice, a massive attic storey with shell motif in relief in the projecting outer sections. Adjoining to the south, a 2-storeyed range of 10 bays with narrow 15-pane sash windows in stone architrave and doorway with moulded architrave and fanlight in coved arch. Ironwork balcony above the doorway carried on stone brackets to full height window in stressed architrave.

The imposing frontage, the Queen's to the left noticeably dwarfs the Princes to the right. 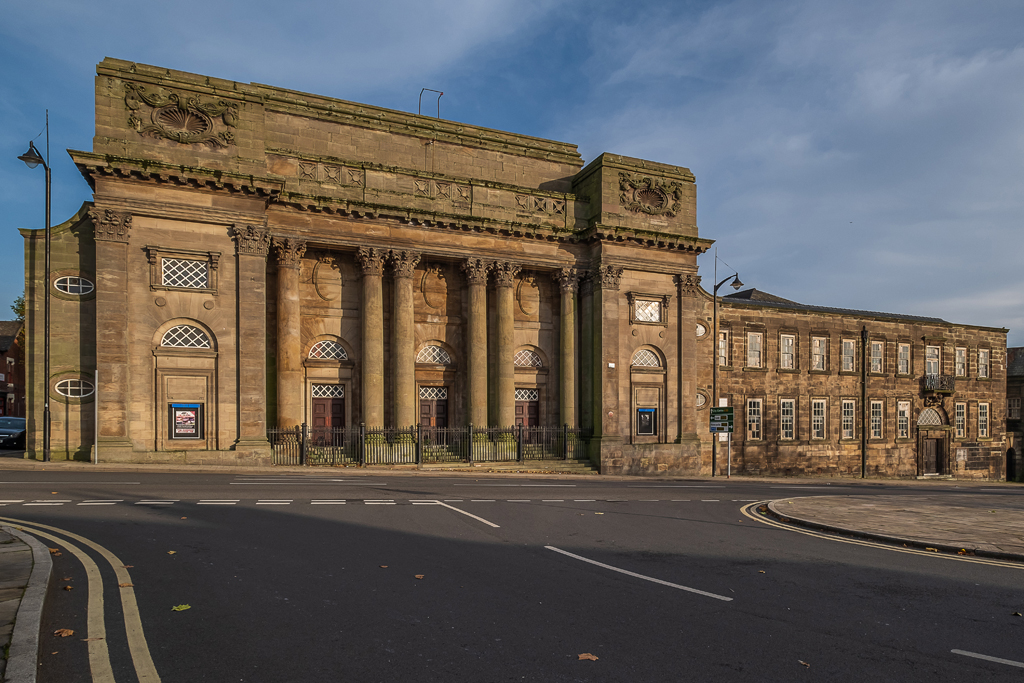 Starting with the Princes Hall side, the central corridor is very nicely detailed, and for the most part in fairly good condition. As is commonplace what look to be nicely tiled walls have been painted over with ghastly magnolia. 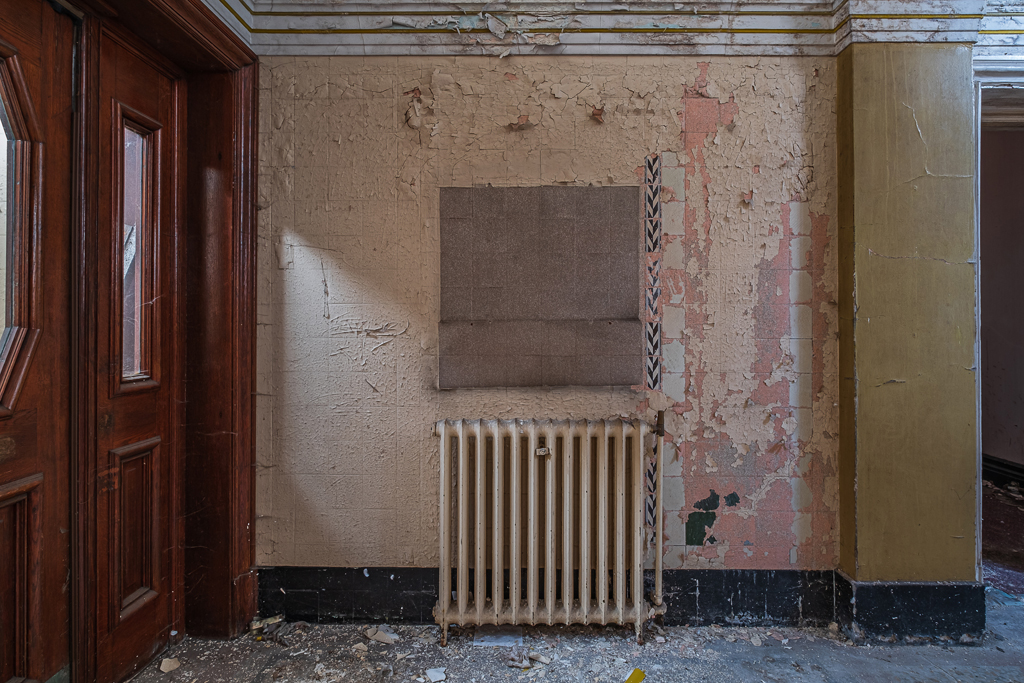 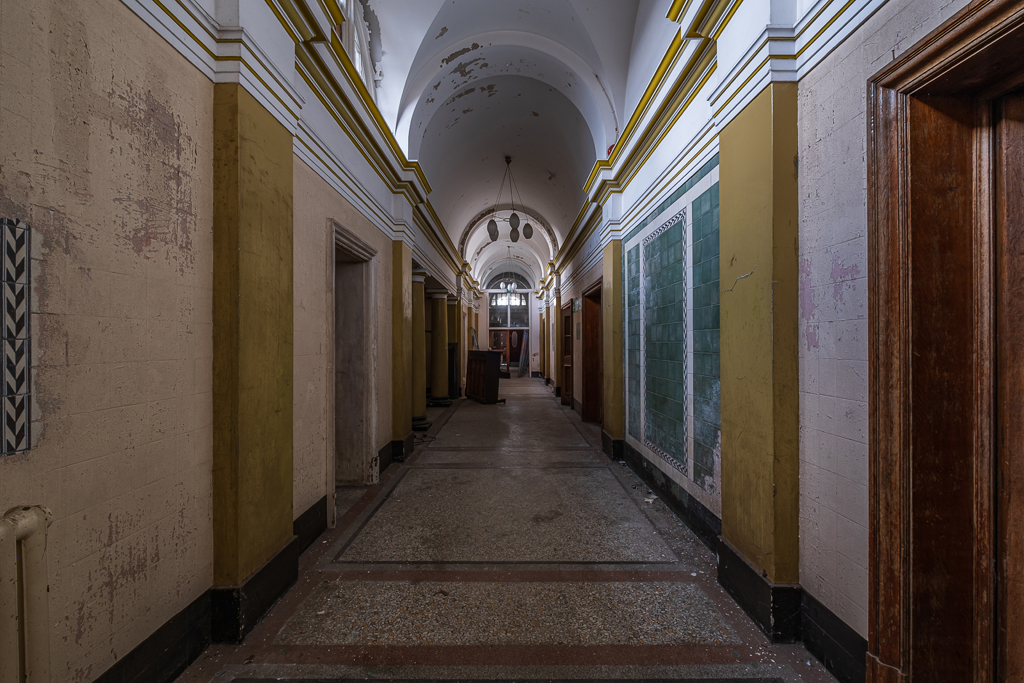 One of the large halls on the ground floor, I believe that these were used as courts at some point in time, this one certainly suggest so with it's "bench". Various theatre bits litter the room. Next door there is a more or less identical hall although it's is filled with what I can only really describe as Portakabins? 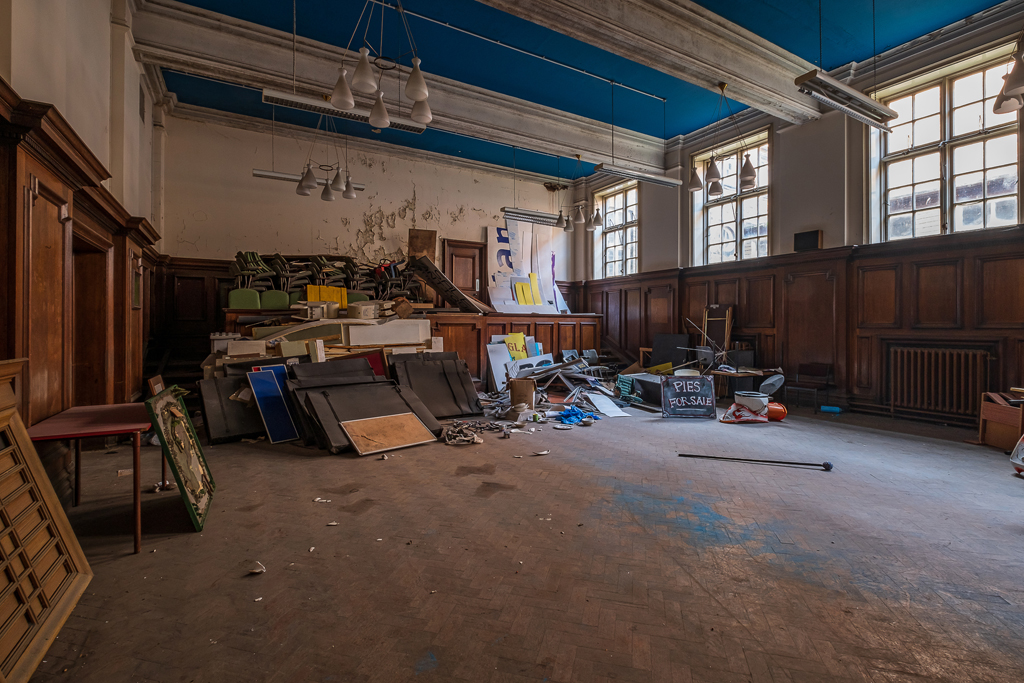 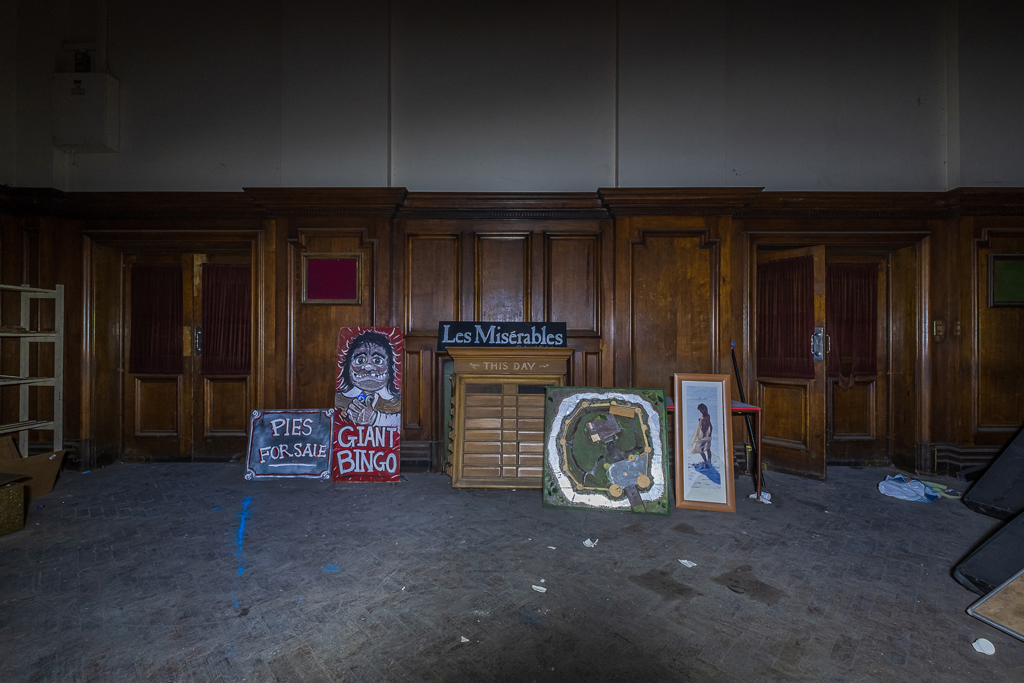 The impressive central staircase of the Princes Hall, not sure I like the yellow! 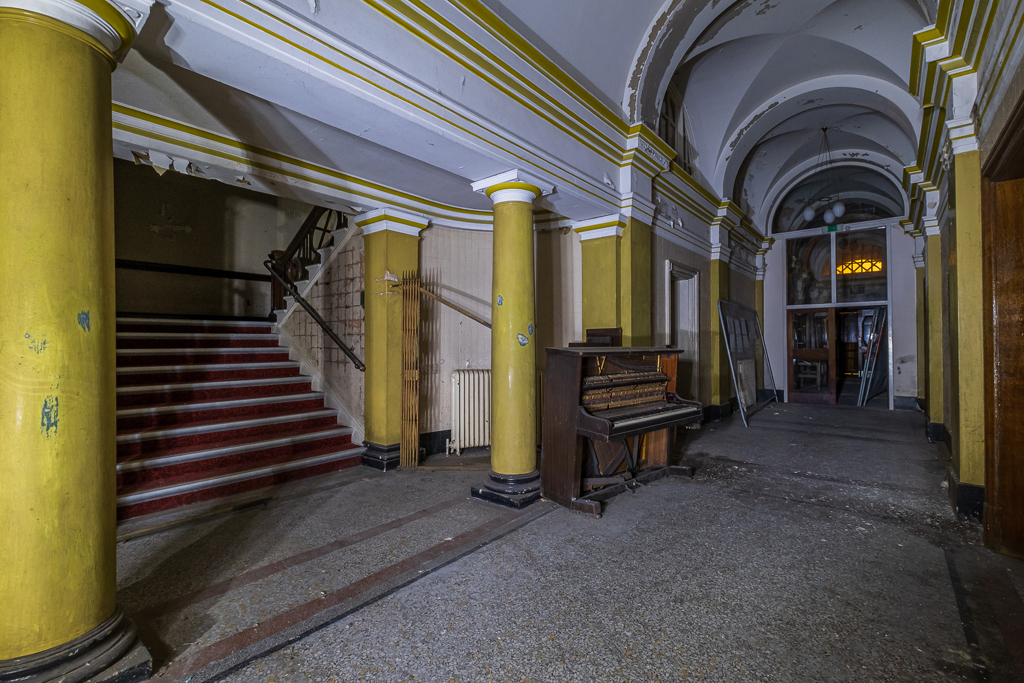 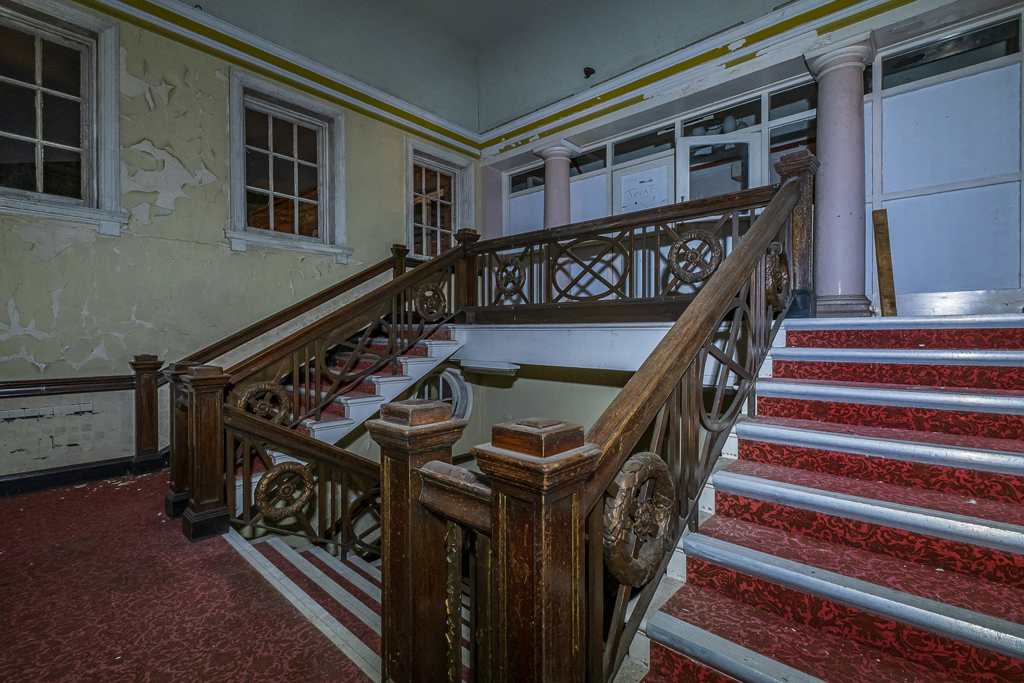 At first floor level immediately above the ground floor halls are similar rooms with nicely detailed ceilings. The second photo is of the one nearer the front of the building, a bit more worse for wear. 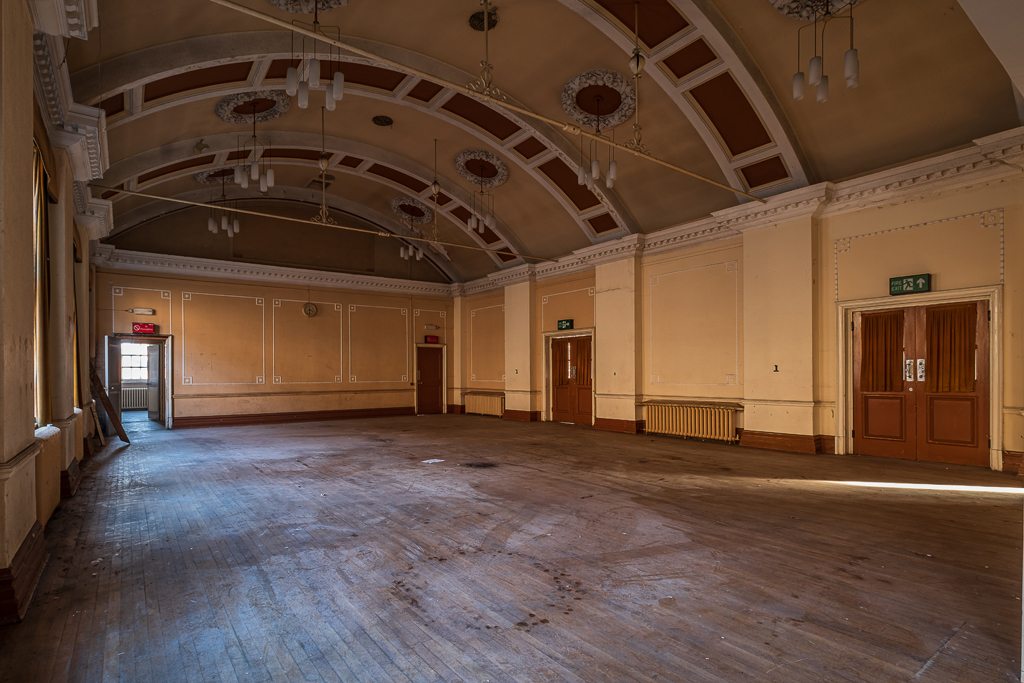 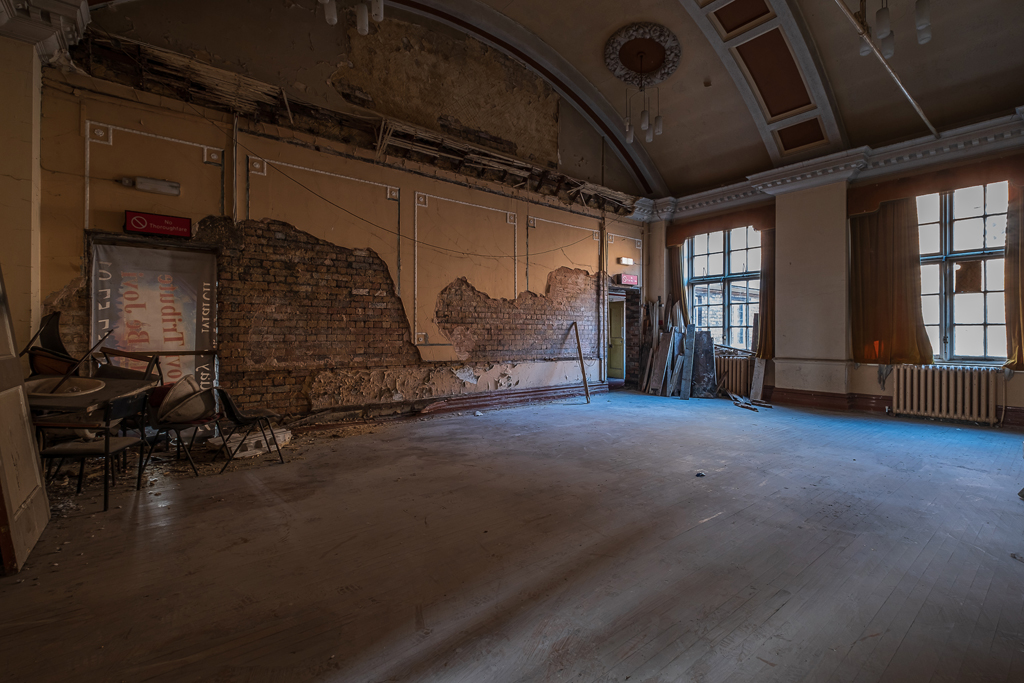 The rear corridor that runs between the two buildings, off this corridor are a number of rooms mostly devoid of interesting features, one is a leftover science laboratory from the buildings college use. 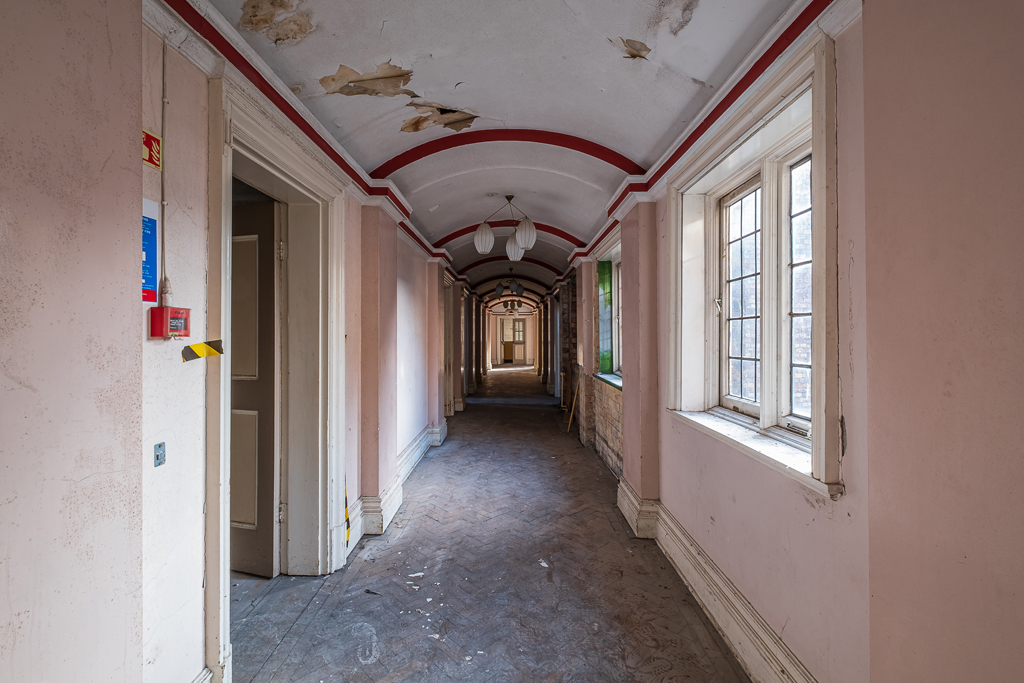 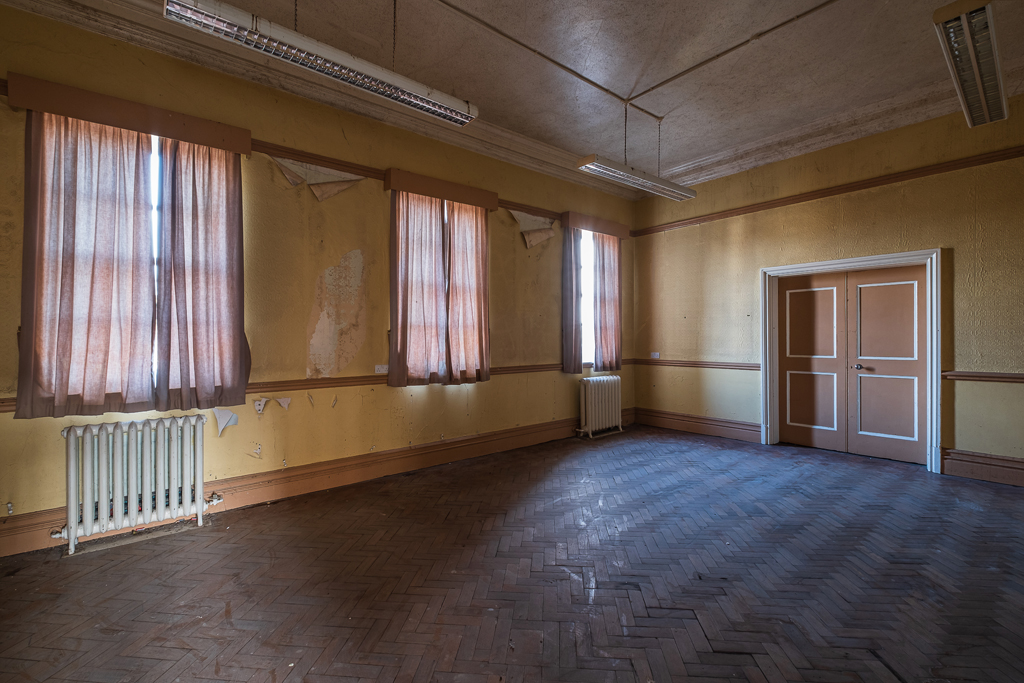 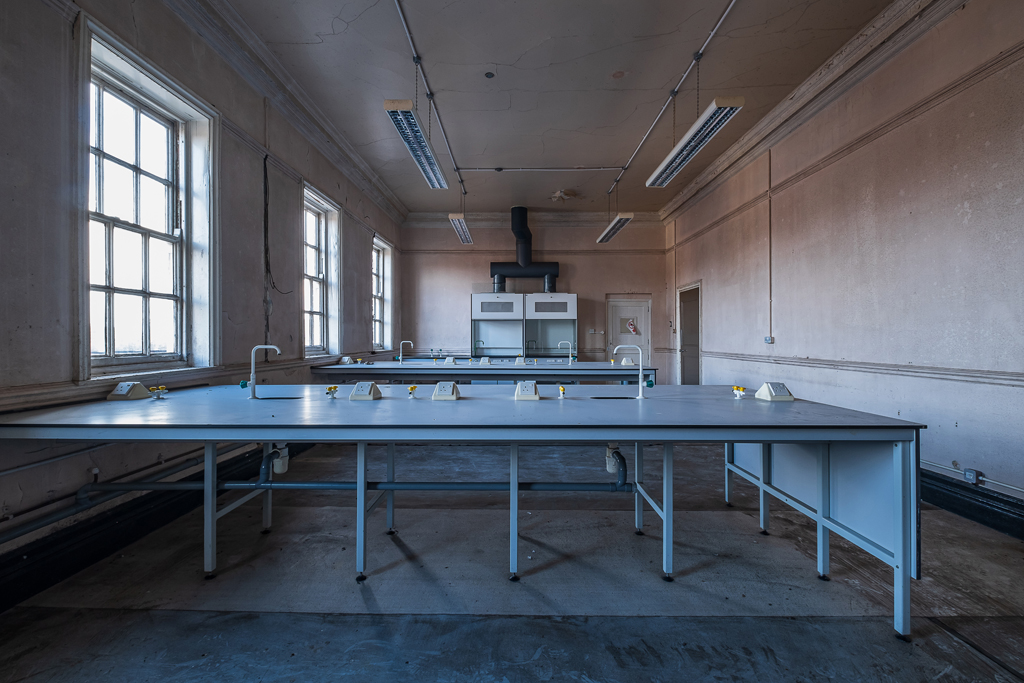 A typical room from the frontage of the Princes Hall, the leaking roof destroyed much of the roof structure and the ceilings. 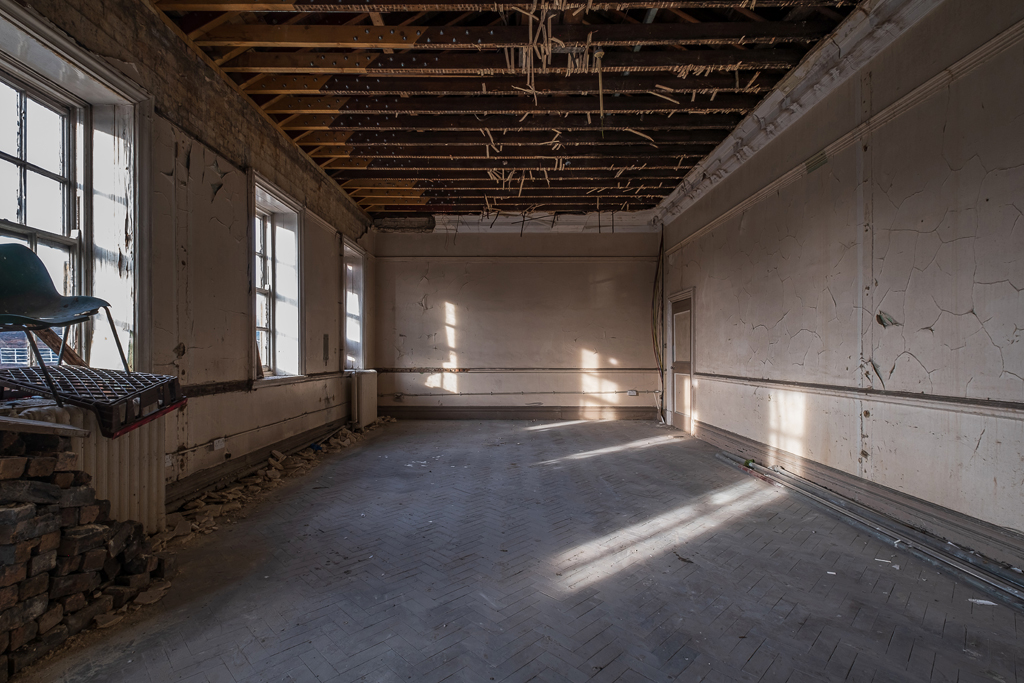 On to the Queen's, immediately inside the main entrance is this fine foyer. 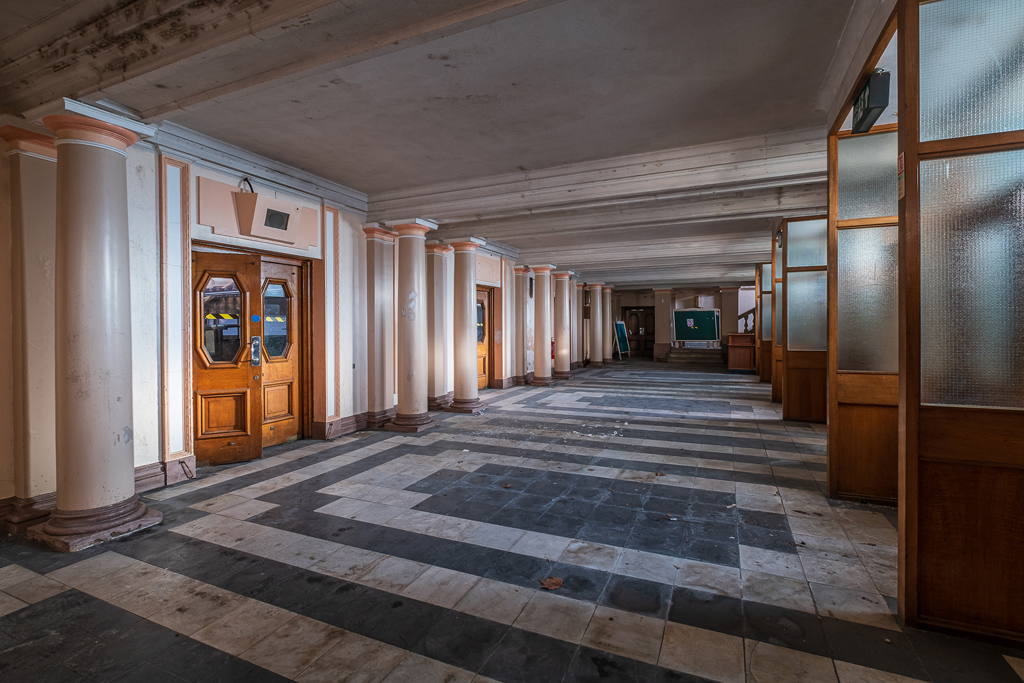 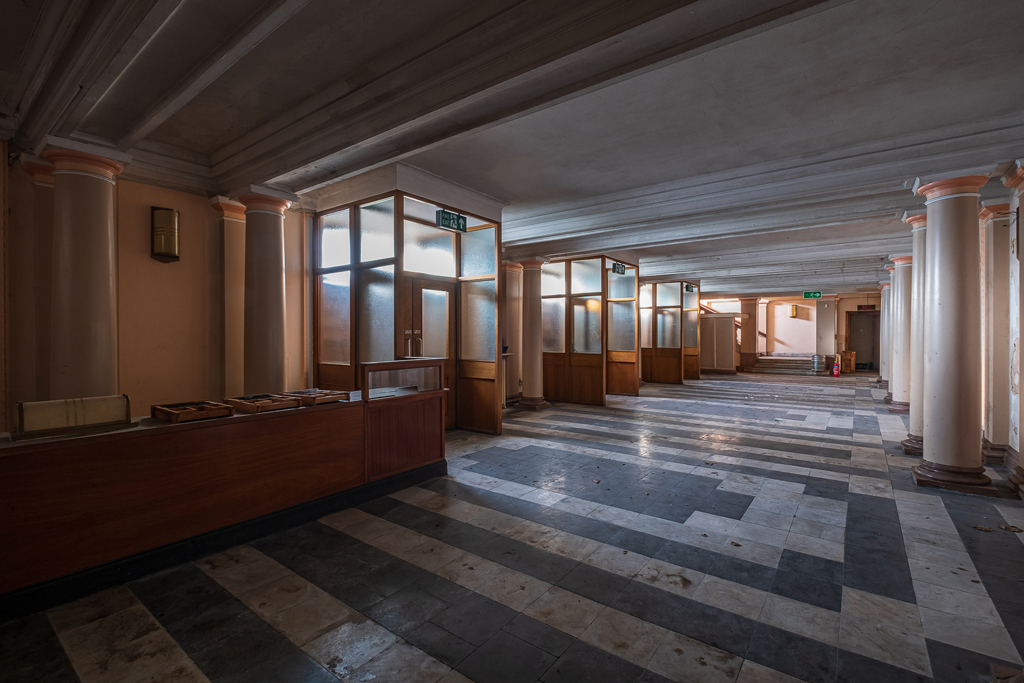 In either corner of the frontage are these large marble-clad staircases, with a nice dome at the top level. 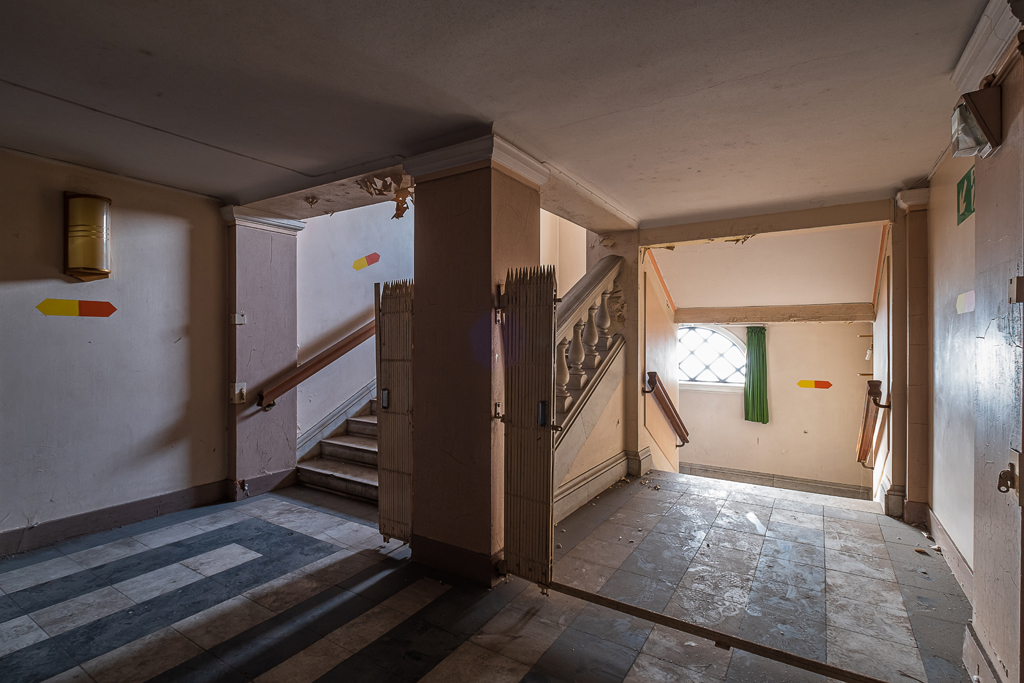 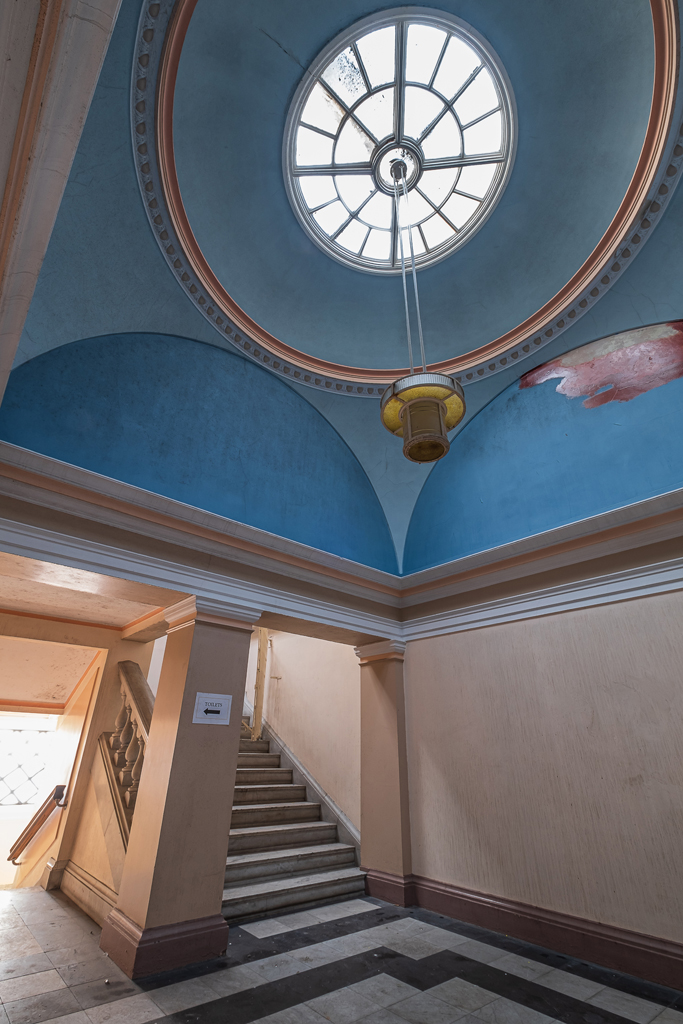 Above the foyer is this modern bar area, despite the insertion of the bar much of the original detail has survived. 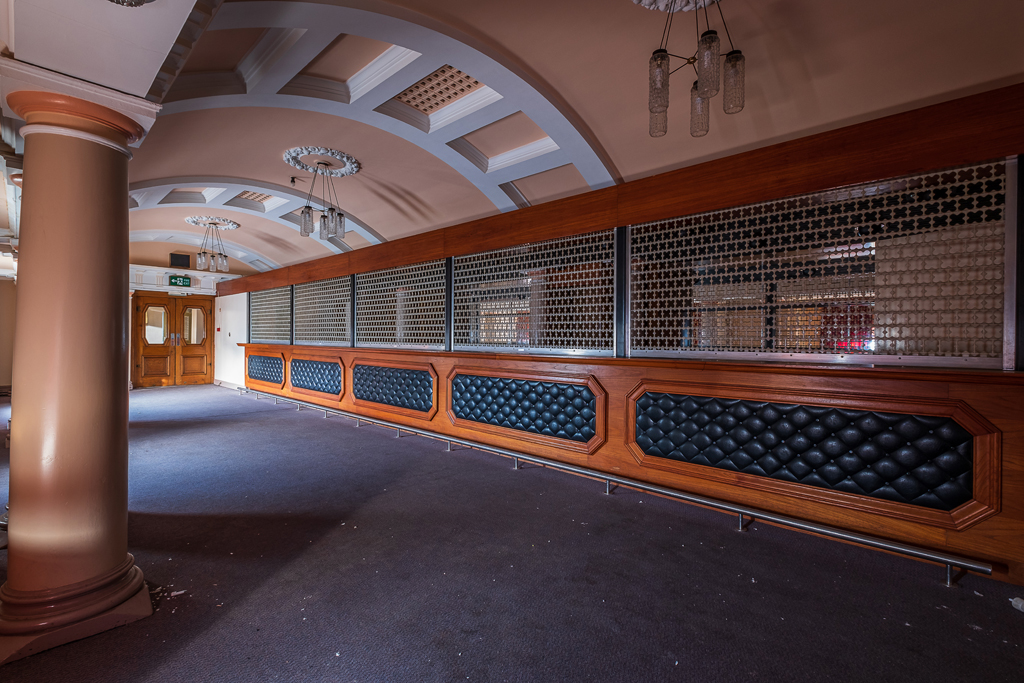 A dimly lit view of the auditorium from the relatively small stage. 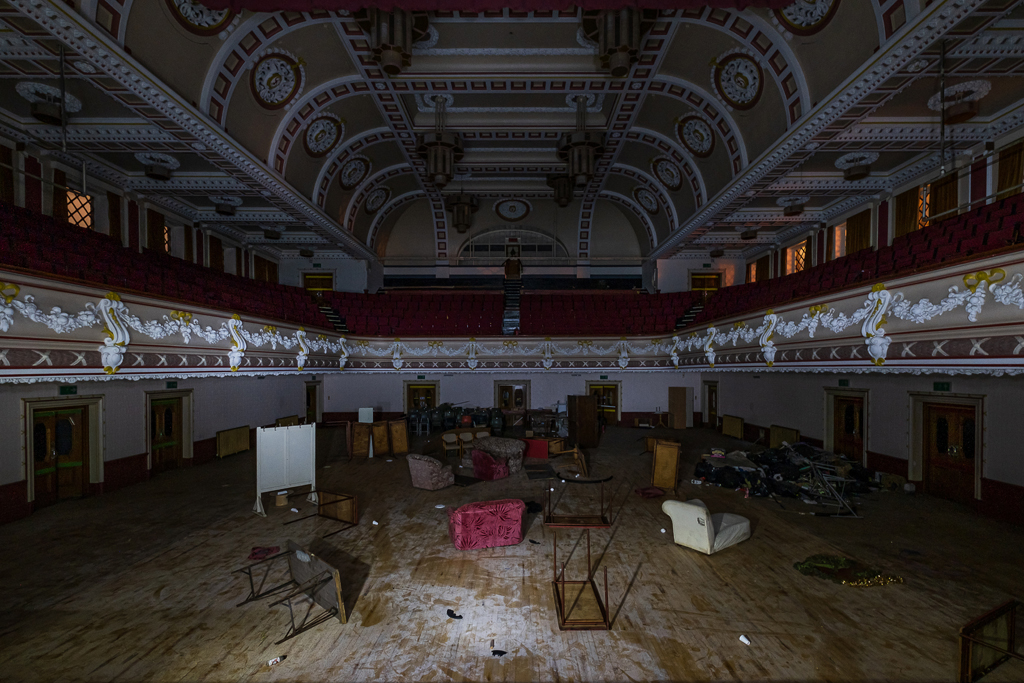 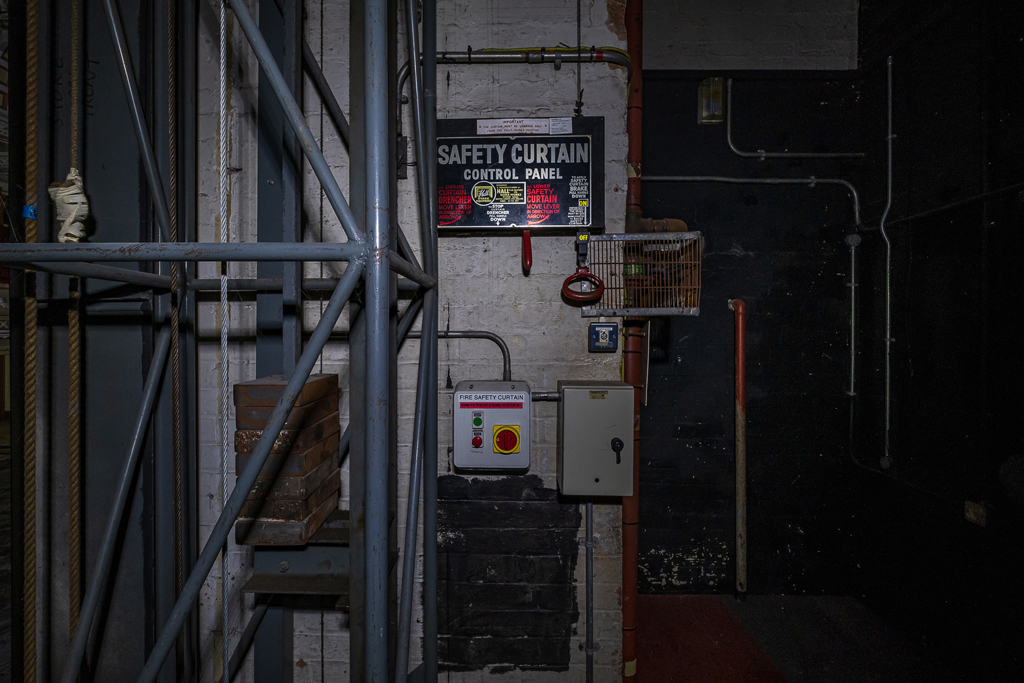 Beneath the stage were a number of pieces of stage set.

Nice to be able to get inside the balcony structure, the piece of steel was pretty impressive. 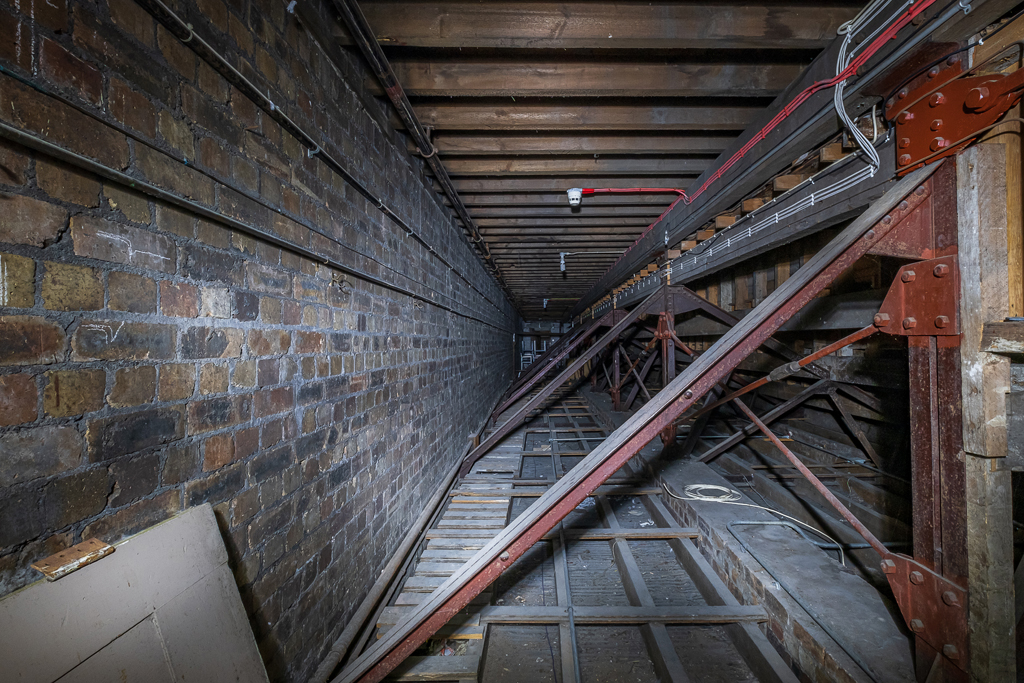 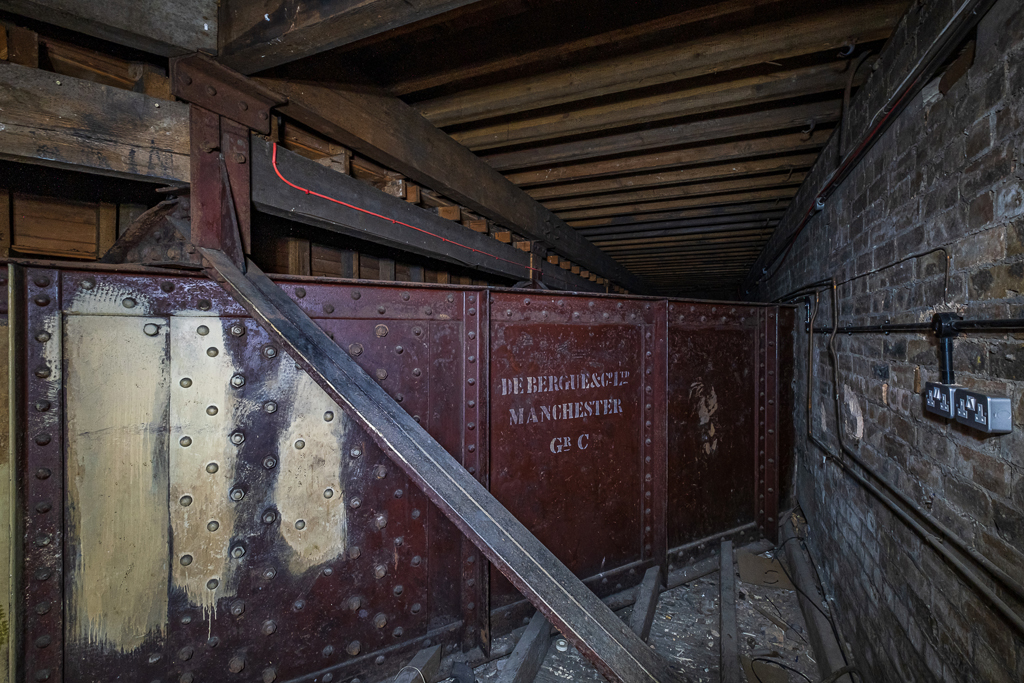 I had hoped that the attic may contain some long lost treasures but unfortunately it was largely empty, save for buckets of sand for putting out fires. 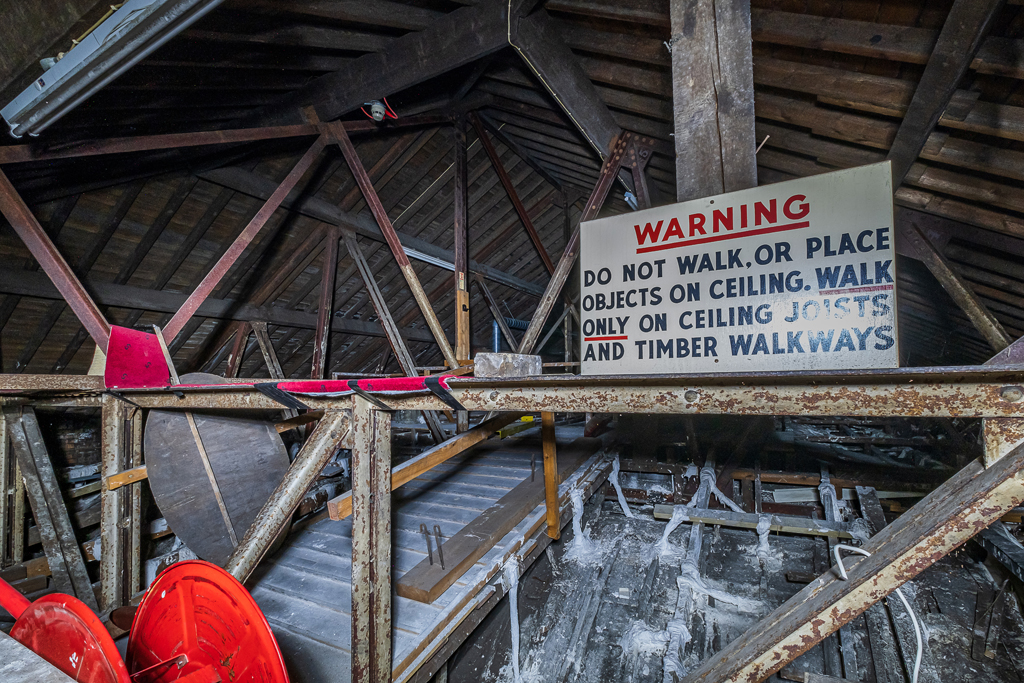 The attic did however provide access to the grid of the fly tower, which was nice. 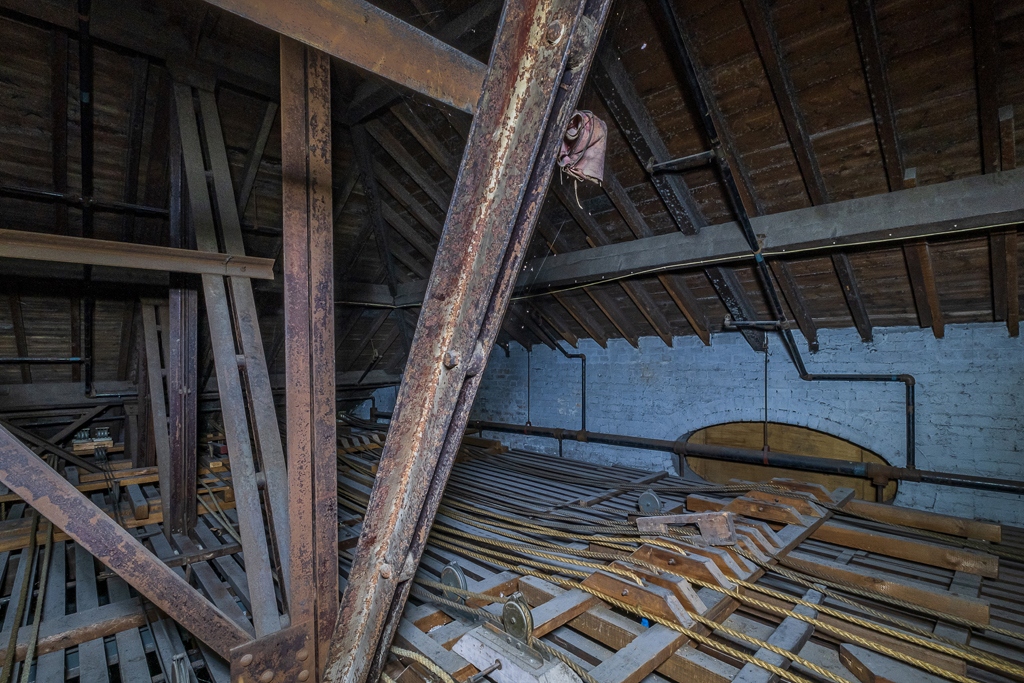 Finally just a bunch of auditorium shots, this is of course what this place is all about. Nice "B" for Burslem motifs in the ceiling details. 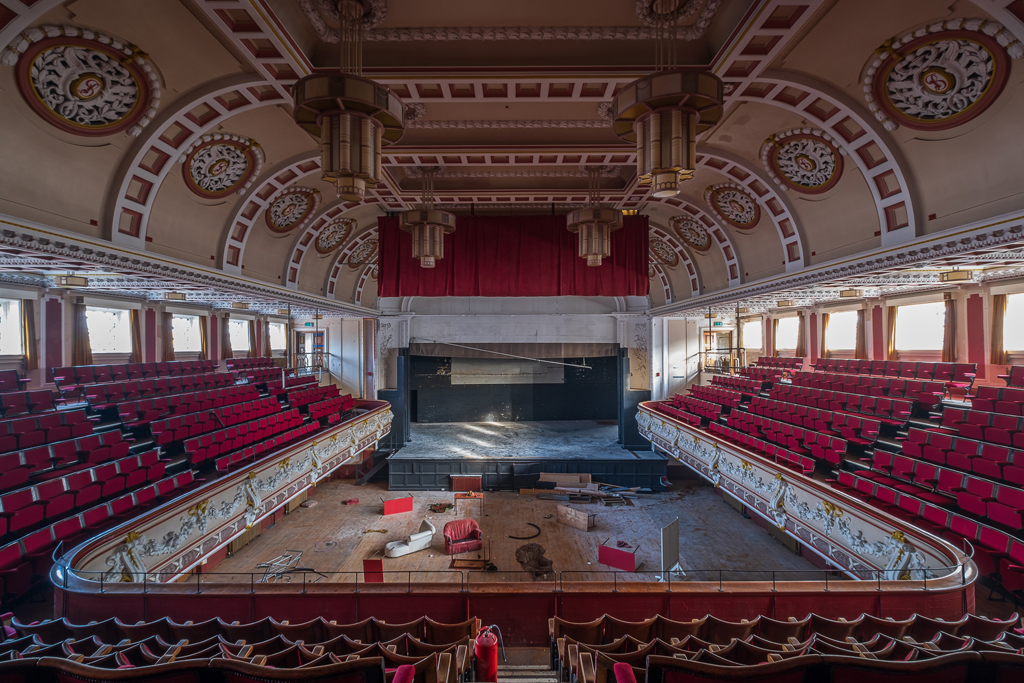 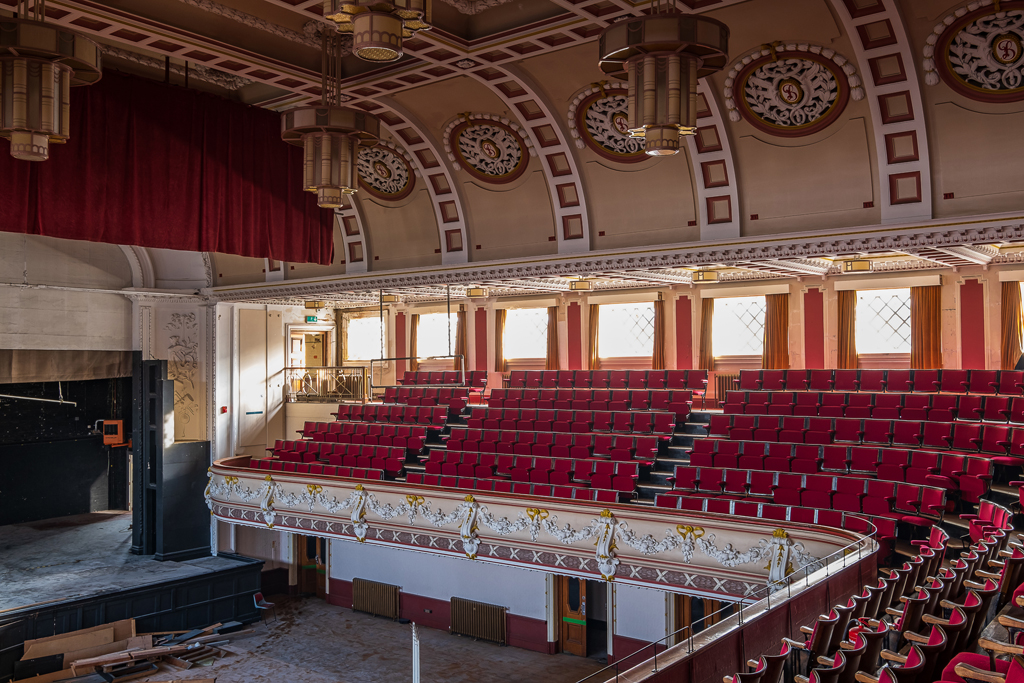 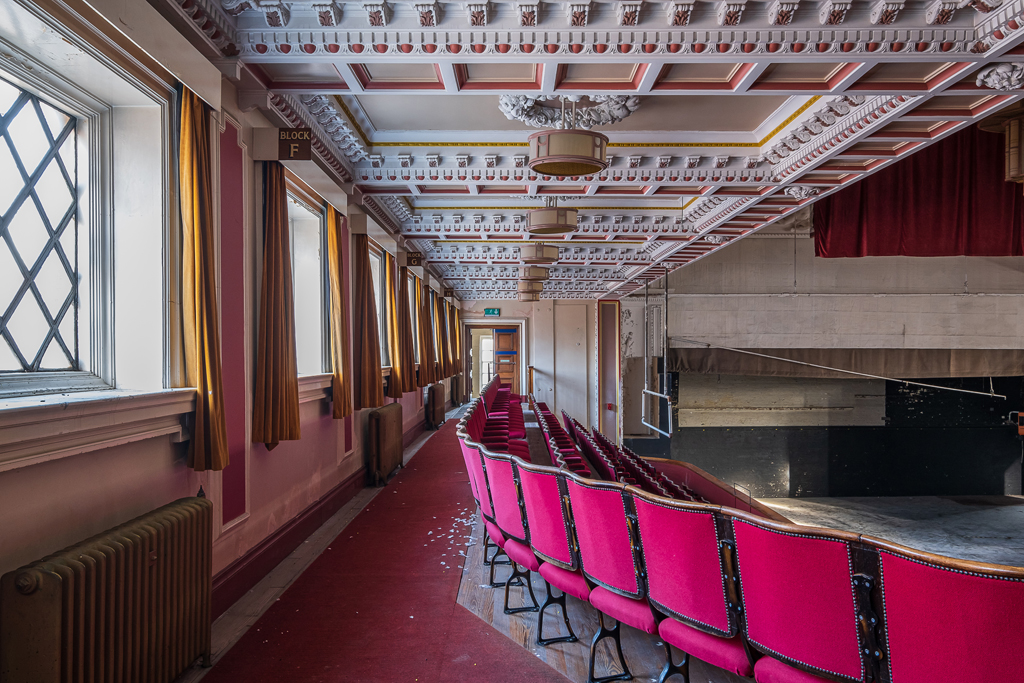 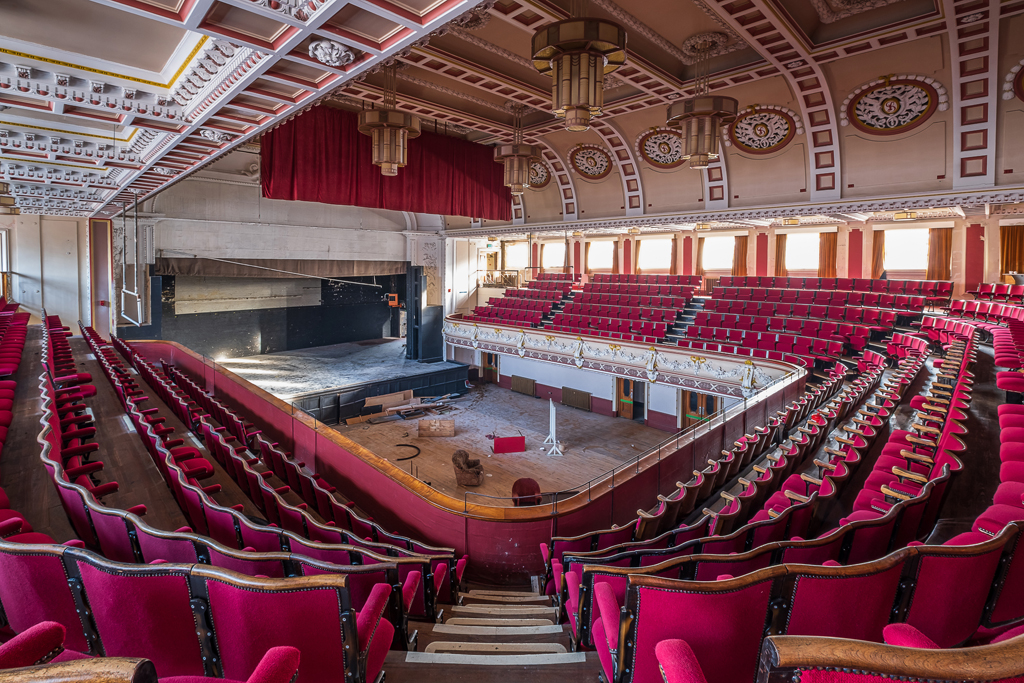