This one is quite an interesting place, it started life in 1893 as the Wellington County Infant's School and in 1982 it became Hanley St Luke’s C of E Aided Primary School. It was closed in 2001 after a new extension was built onto the adjacent junior school. At some point afterwards the buildings were used by Peggy Davies Ceramics, this continued until the early 2010's.

Based in Stoke-on-Trent, England – the heart of the British potteries – Peggy Davies Ceramics has become synonymous with quality hand-made and hand-decorated products. To this day, the family-owned business continues to produce ceramics in the traditional way thanks to their skilled craftsmen and women. Established in 1981 by the famed modeler Peggy Davies, the company produces collections of figurines at their workshop located on the family farm in Staffordshire. Miss Davies was a major creative force at Royal Doulton, modeling over 250 figures – a feat unequalled by any other modeler. Following her death in 1989, her son, Rhodri decided to move the family business to larger premises and set about commissioning new British modelers to carry on the creation of exciting new collectable ranges.

The buildings are listed and as such are featured on the Historic England website:

School. 1893 with later addition to right c1960-1969. Designed by the architects to the Hanley School Board, R. Scrivener and Sons of Hanley; contractors, T. Godwin and Sons of Hanley. Interior tiles probably by Minton Hollins. Reddish brown brick in Flemish bond with moulded blue brick copings to plinth and string course, moulded terracotta tile dressings to eaves and stacks, ashlar voussoirs and pargetting in gables; plain tile roofs, that to front central range is hipped to left, with glazing to hall roof; tall brick stacks with moulded cornices to angles between ranges at front and to rear. Vernacular Revival style. Occupies a sloping site. Plan: central main hall surrounded by classrooms and cloakrooms, expressed as central, single tall storey range with lower, one-and- a-half storey range to front and single tall storey on basement to rear, all between ranges at right angles to main block to either side, with single tall storey to front and on basement to rear. Front has three bays: 1-4-1; the outer bays break forward (that to left more prominently) and have gables with pargetting, that to left incorporating inscription H.S.B. (Hanley School Board); centre range with two gabled attic roof dormers with similar pargetting. Entrance off-centre left in angled porch has 8-panel door with divided fanlight and surround with voussoirs. End ranges have wide, tall tripartite windows, that to left has three 6/6 sashes with pilaster strips between and divided wide, cambered arched multi-pane overlight and voussoirs to arch. To right a central pair of 4/6 sashes with fanlight with central circular glazing bars between narrow, tall 416 sashes with fanlights, all with voussoirs. Central range has 4/4 sashes and 3/3 sash all with blind fanlights with pargetting and arches with keystones, another 1/1 sash. Casement windows to attics. Left and rear elevations have similar tripartite windows and gables with pargetting, one to rear incorporating date. INTERIOR: extensive use of fine tiling to dado in entrance hall, main hall and classrooms with cream, buff, white, dark red, brown and dark green glazes. The dado incorporates panels of embossed tiles with a variety of patterns and is surmounted by moulded tiles; the tiles have been close set without grout. Above the dado to the main hall on two sides are glazed partition walls with panes of coloured glass; sliding part-glazed doors to classrooms. The main hall has eight bays and a part-glazed roof with false hammer-beam collar-truss with upper king strut. Clerestory lights between some classrooms. Classrooms retain fitted slate boards in moulded tile surrounds and fitted cupboards with 4-panel doors. Tobins inlet ventilators to some rooms. To attics are gas jets. The school was close to the Minton Factory. Many of the tiles are similar in design to those illustrated in the Minton China Works catalogue, c1880-1890. The school interior retains an unusually fine collection of embossed tiles. It was originally known as the Wellington County Infants' School.

Like more or less everything we've been doing recently it had been on the to do list for a while. Initial peeks inside had revealed some really nice tiles and stained glass so even if it was massively derped it would at least still have some redeeming features. When we did eventually get in we were greeted by several hundred pigeons who have taken over the place, leaving a good couple of inches of droppings across literally everything inside, yum. It's a bit of a weird one, on the one hand it's an absolute belter of a Victorian era school, retaining practically all of it's old features, then there's a load of pottery industry equipment sitting inside it.

Some photos from the Peggy Davies era: 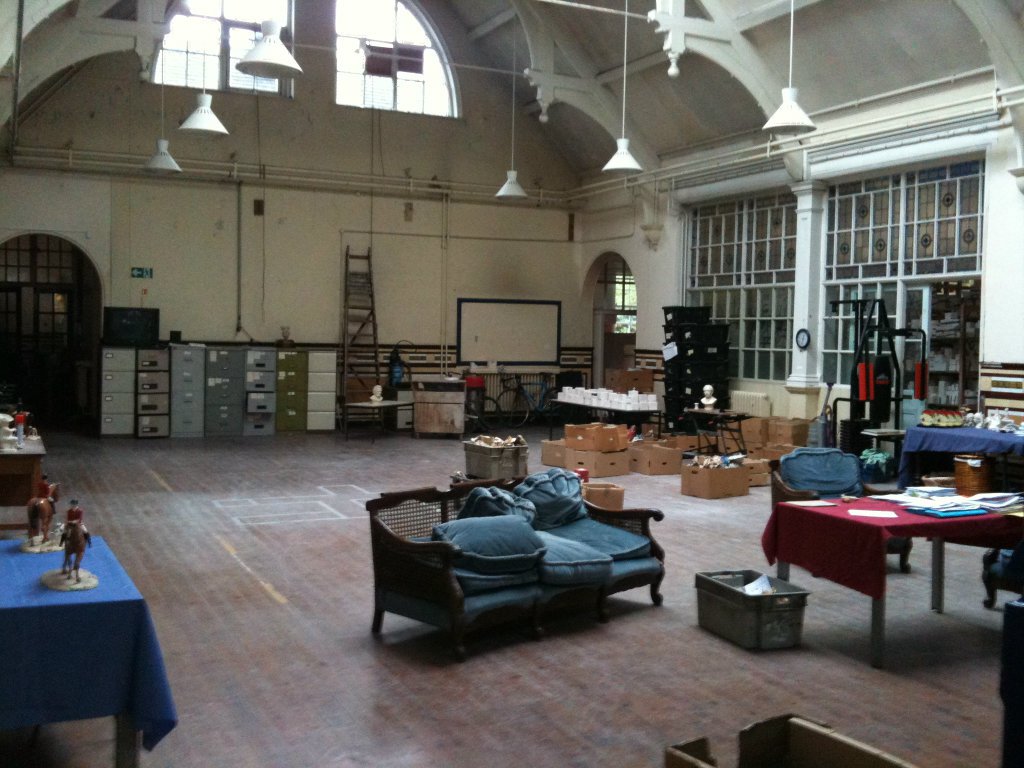 Despite a few years of neglect the building is in remarkably good condition, save for a bit of a leaky roof. I think that most of the smashed windows have been caused by the vandal pigeons. 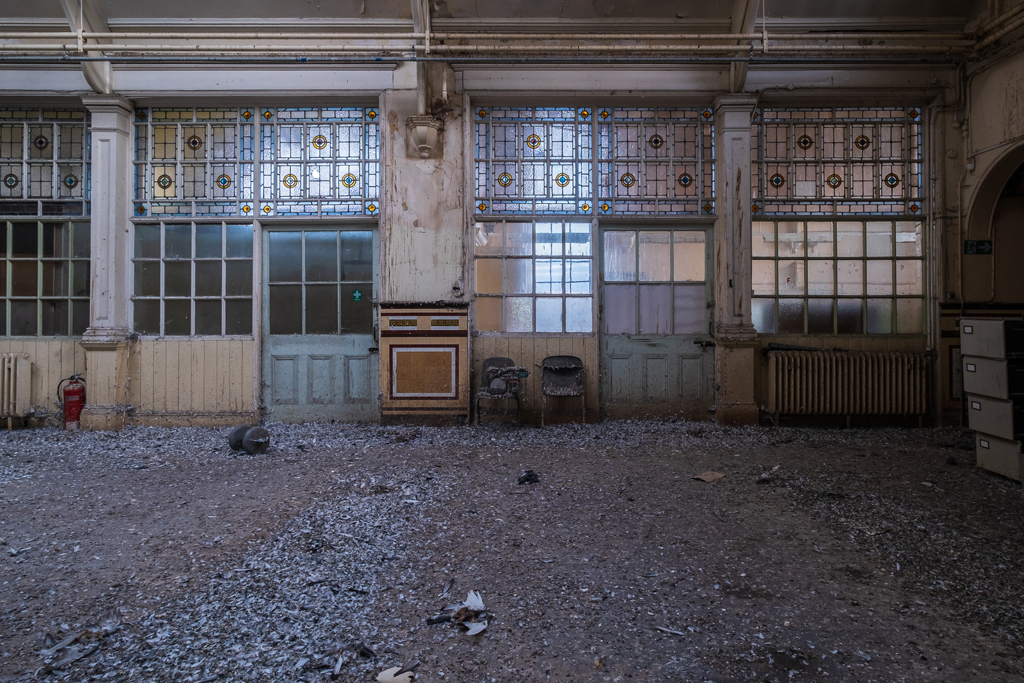 Tiny basins, the only real modifications that have been made from the original school are the addition of toilets. 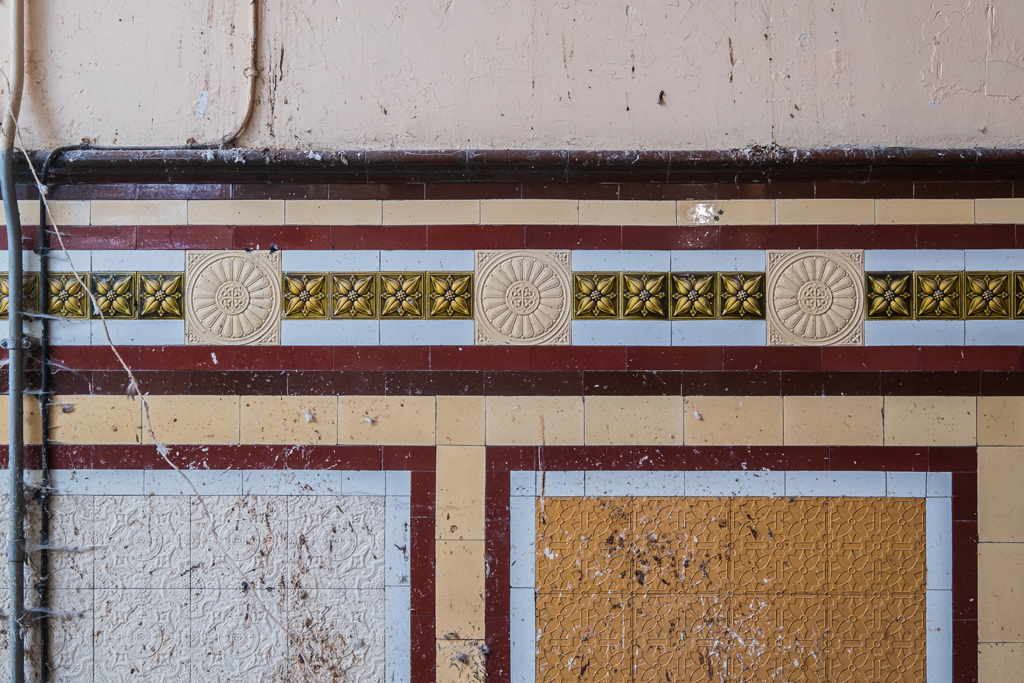 Some of the former classrooms. 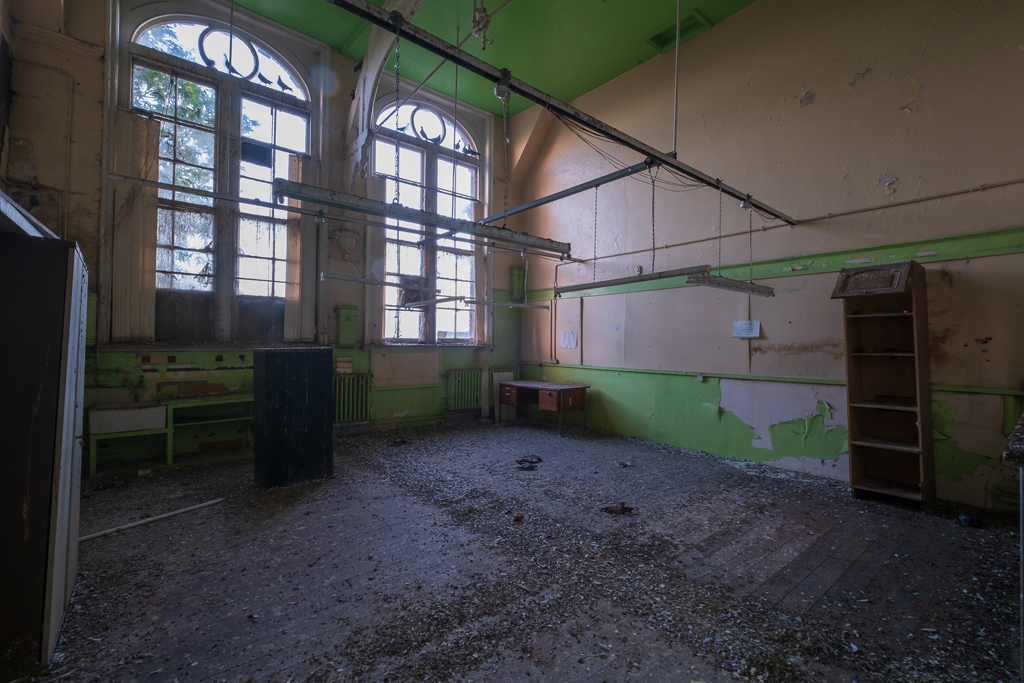 This is the room shown in the second old photograph. It still contains a kiln and one of the casting benches. 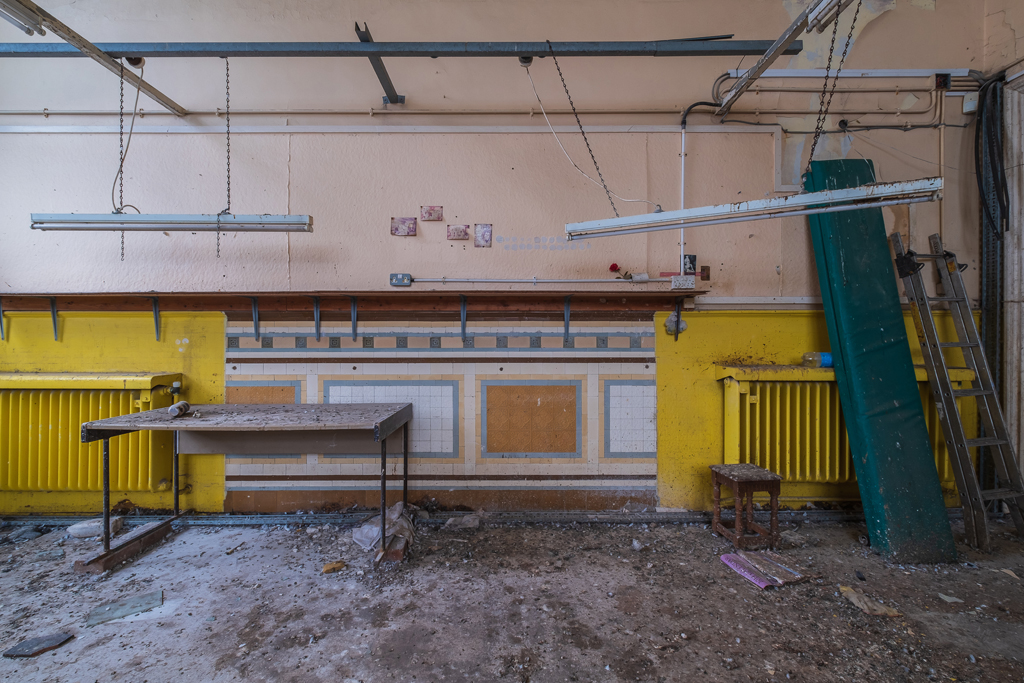