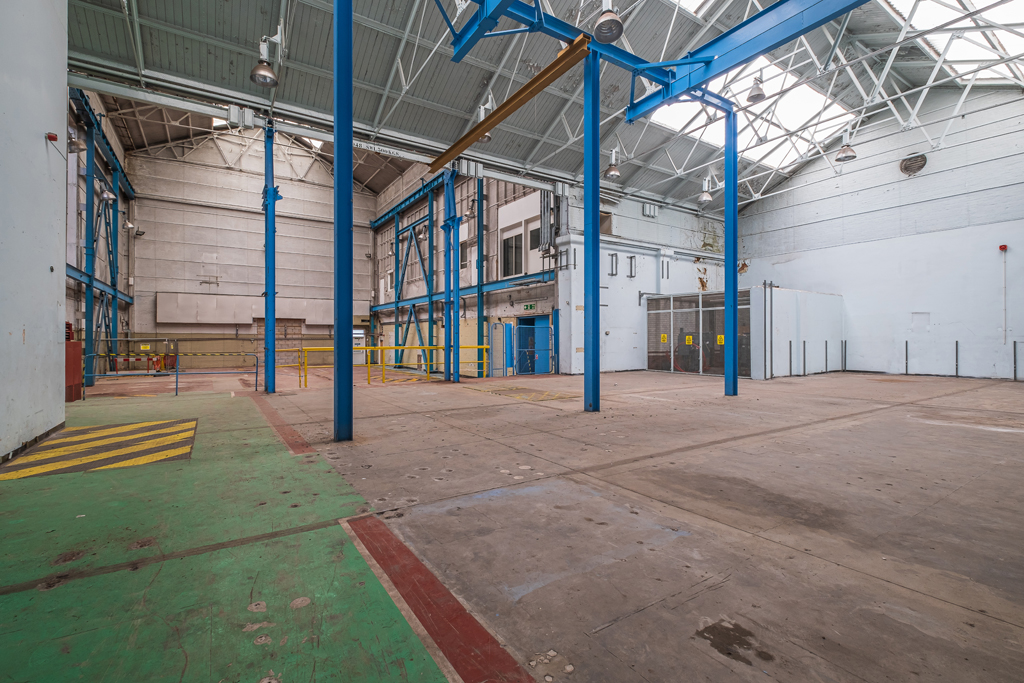 The electrical industry has played a key part in the history of Stafford since the turn of the 20th century, when Siemens Bros. constructed a new factory for the heavy-current side of the business in 1903. The Stafford works were taken over by English Electric in 1919 becoming their main base of operations for the manufacture of medium-sized electrical plant, transformers, switchgear and large turbo-alternators. In 1968 English Electric was merged with GEC, which in 1989 merged with the French company Alsthom to form GEC-Alsthom. The company was rebranded as Alstom in 1998. General Electric purchased the power generation and transmission businesses in 2015 for $17 billion. Throughout the years and under the various different names the company has operated across multiple sites around Stafford, some parts dating all the way back to the Siemens days. In recent years they have constructed some new facilities on the outskirts of the town whilst simultaneously moving some divisions away from Stafford to their sites in Rugby. This has lead to the closure of the St Leonard's Works which were swiftly demolished to make way for a controversial housing development, the Power Services site has now also closed and is also scheduled for demolition in the near future for more housing. This leaves just the transformers facility still operating in it's original location. The HVDC Testing Facility closed at a similar time to the other two sites, being replaced by a new facility again on the outskirts of the town at Redhill.

The facility that this report is about originally started it's life as the Bull Hill Electricity Works built in 1895, I've managed to dig out a bit of history, as follows:

Still stands, some bay of old building remain with the striking and handsome 1939 extension dominating. Still labelled "Stafford Power Station" but now only a sub-station. Built as a municipal undertaking adjacent to gasworks, with low-voltage d.c., 565kW in 1913. Expansion during WW1 lead to 4MW by 1921, then 9.6MW by 1930. Taken over in 1930 by North West Midlands Joint Electricity Authority from whom Stafford Corporation then purchased electricity in bulk. Transferred to B.E.A. (later C.E.A.) in 1948 and operated at 6MW until closure in about 1960. Extensive re-equipping in 1925 and 1951 fails to explain why the new extension bears the date 1939.

Information on the place is very limited, but in 1974 a planning application was submitted on behalf of GEC to convert the buildings in to an electrical testing facility for research and development of HVDC transmission valves. This continued up until only a couple of years ago, with very little changes made to the buildings aside from ugly cladding being added. Perhaps the old lettering is still there underneath! The building is currently to let and a planning application was submitted at the end of last year to use it as some sort of self storage facility.

Since learning of the closure of these places I've been keeping a keen eye on them, although perhaps not keen enough given that I completely missed the St Leonard's Works being flattened. Managed to get this site cracked off back in July, however the other site is proving elusive to me and certainly needs more investigation as it has a lot of interesting looking buildings (overspeed testing facility, air raid shelters etc, alongside the obviously massive factory complex).

An aerial photograph of the works (picture centre left), surrounded in a clockwise direction by the town gas works, Evode Polish and Adhesive Works and the former infirmary. Image taken from Britain from Above - always worth looking at the zoomable version! 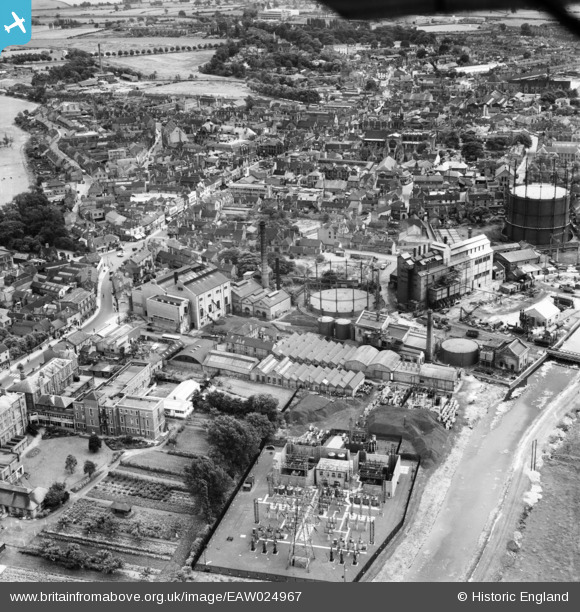 The buildings as they look today, with the aforementioned ugly cladding. The very nice "office" bit to the right is something that I'm keen to see inside, I've heard control room rumours. 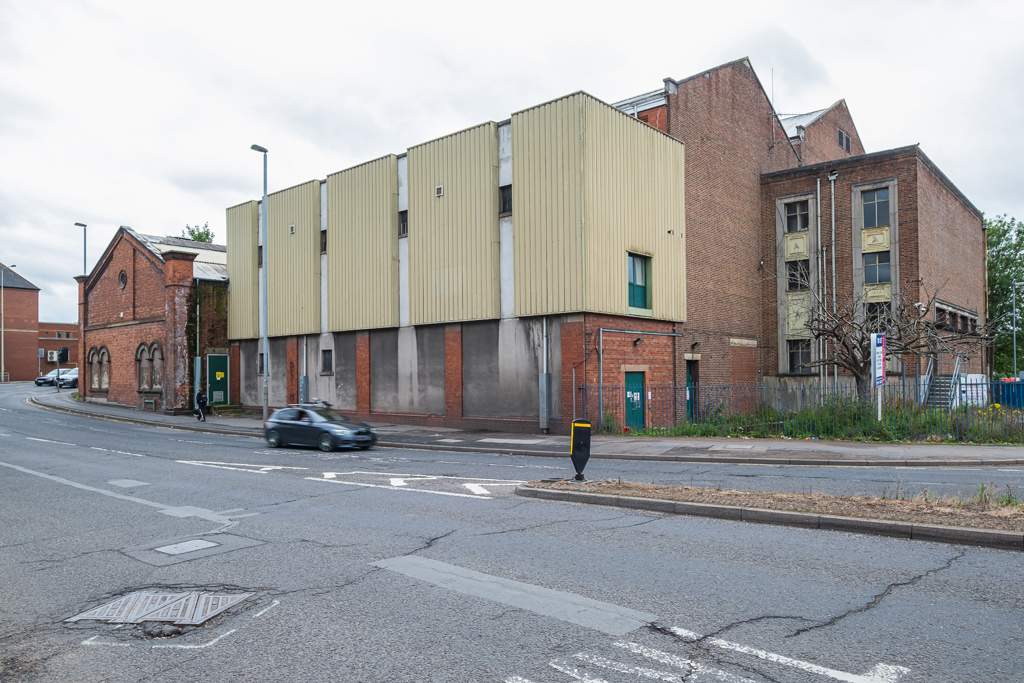 The works as they looked in 1965, the large chimney was demolished a year later. Staffordshire Past Track 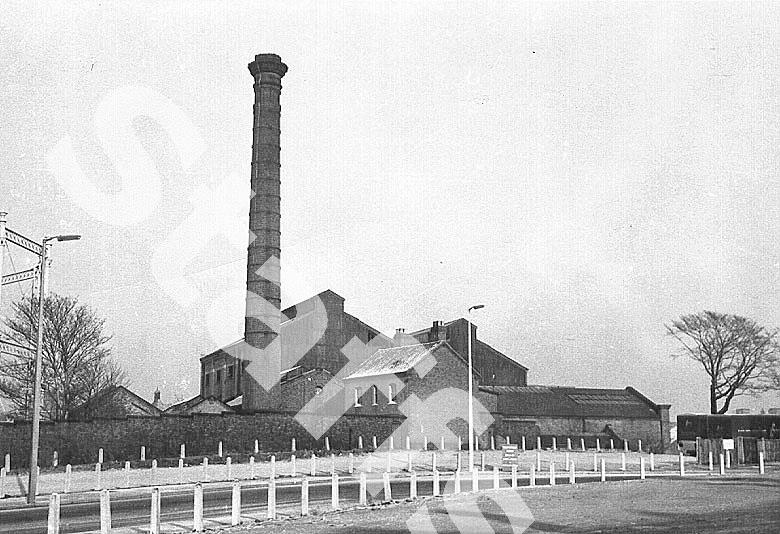 A workman stoking one of the three boilers, pre 1910. Staffordshire Past Track 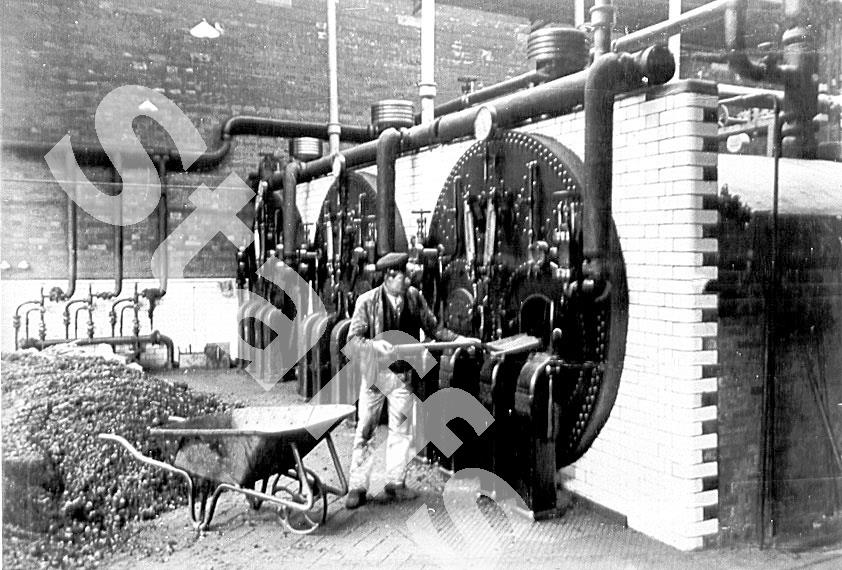 The three horizontal steam engines which would have driven the electricity generating equipment, pre 1910. Staffordshire Past Track 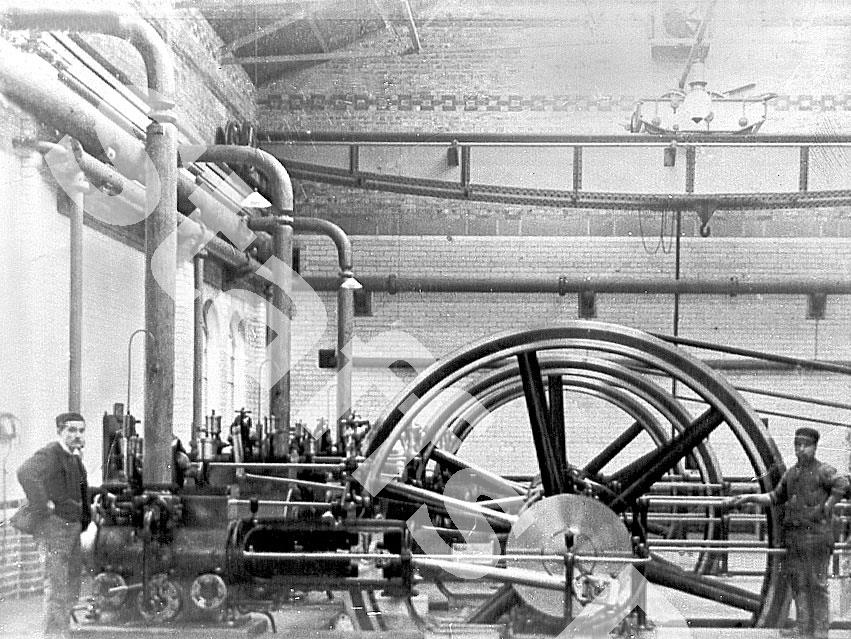 Whilst I couldn't really locate the position of the boilers, it was quite easy to find where the engines were once positioned. The area where they once stood is now occupied by the toilets. The arched windows in the archive image can be seen in the present day image although now bricked up. Similarly the pattresses for the pipework bracketry are still in position, as is part of the gantry crane track. 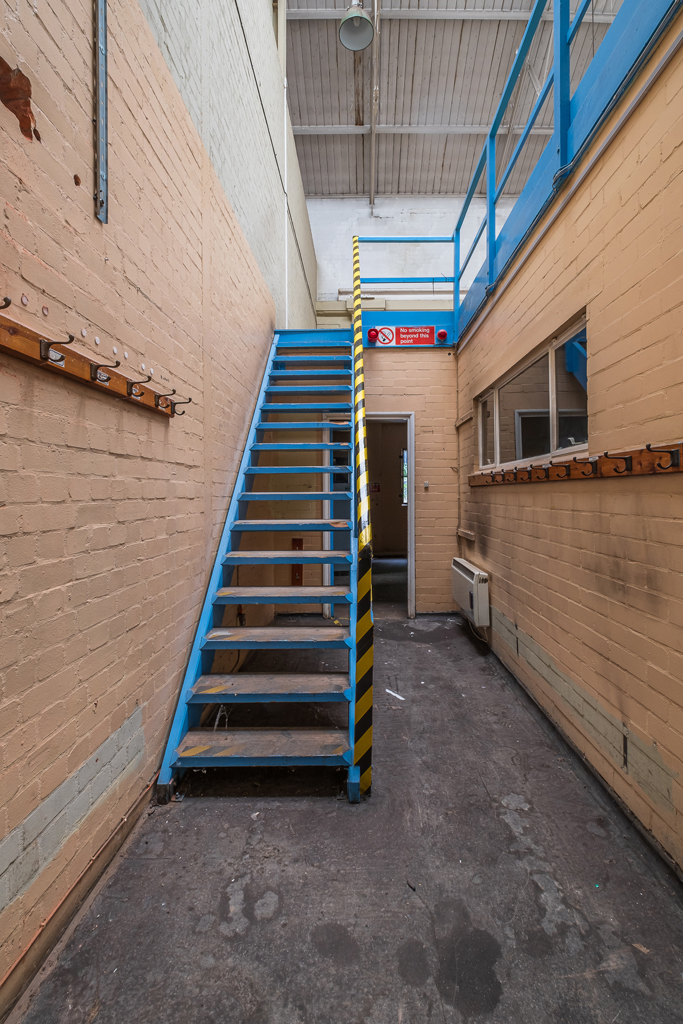 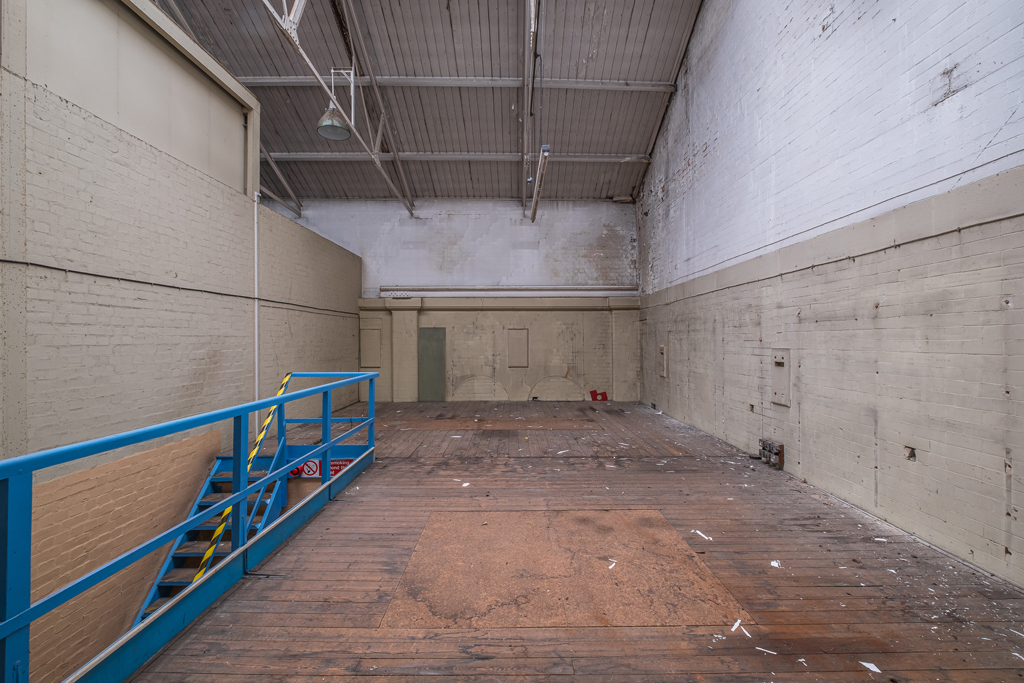 Part of the building still house a small sub station, you can see the nice original glazed brick work, in all other areas this has been covered over. 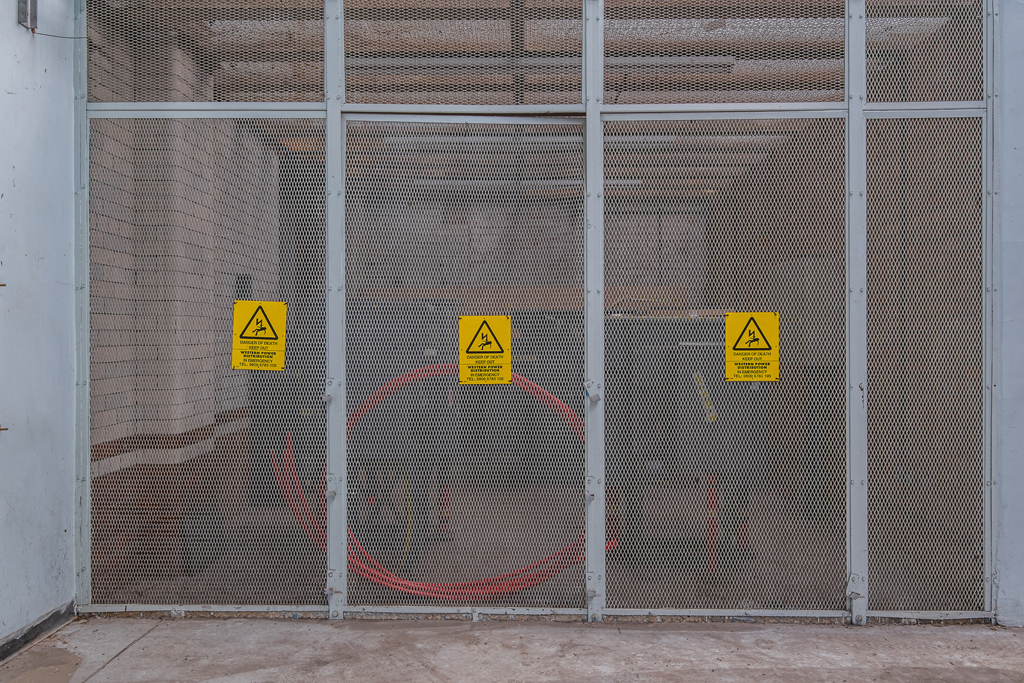 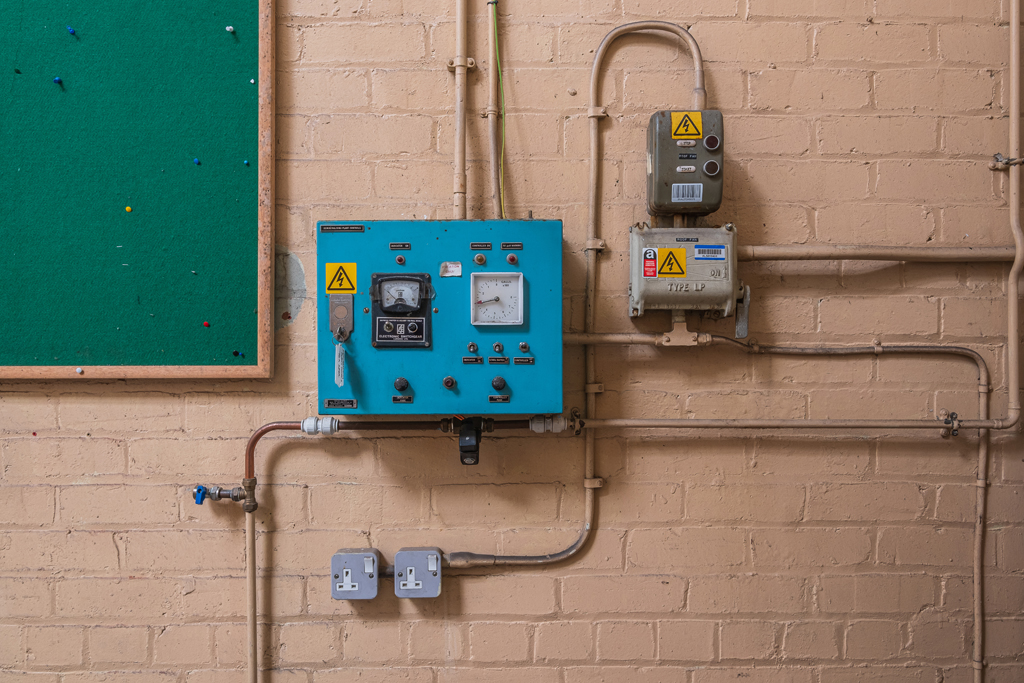 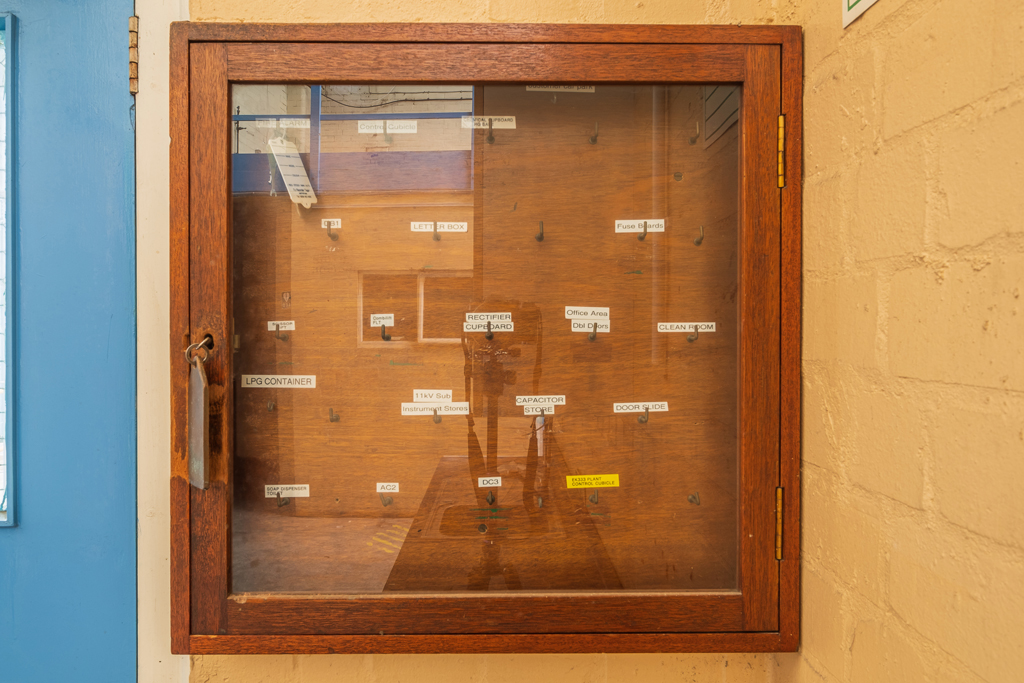 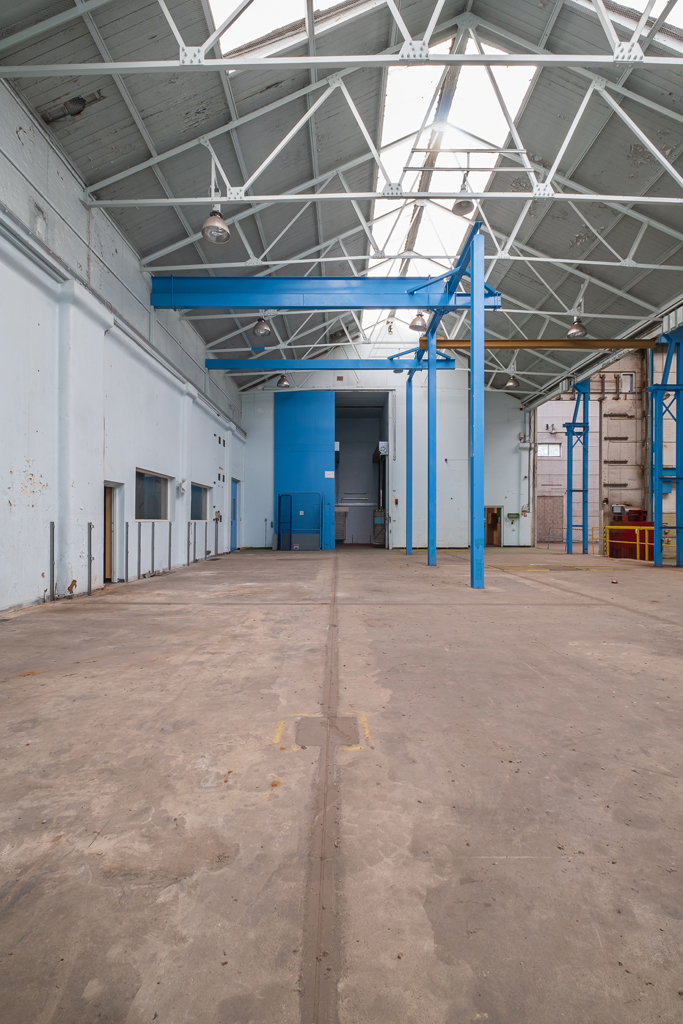 In the same location the below image taken in August 1969 shows an operative named John Underhill stood by a mercury arc rectifier development anode. The anode was to be used on the Nelson River DC Link in Canada. The picture shows light link telemetry measuring the current through the valve anode, new technology at the time. Staffordshire Past Track 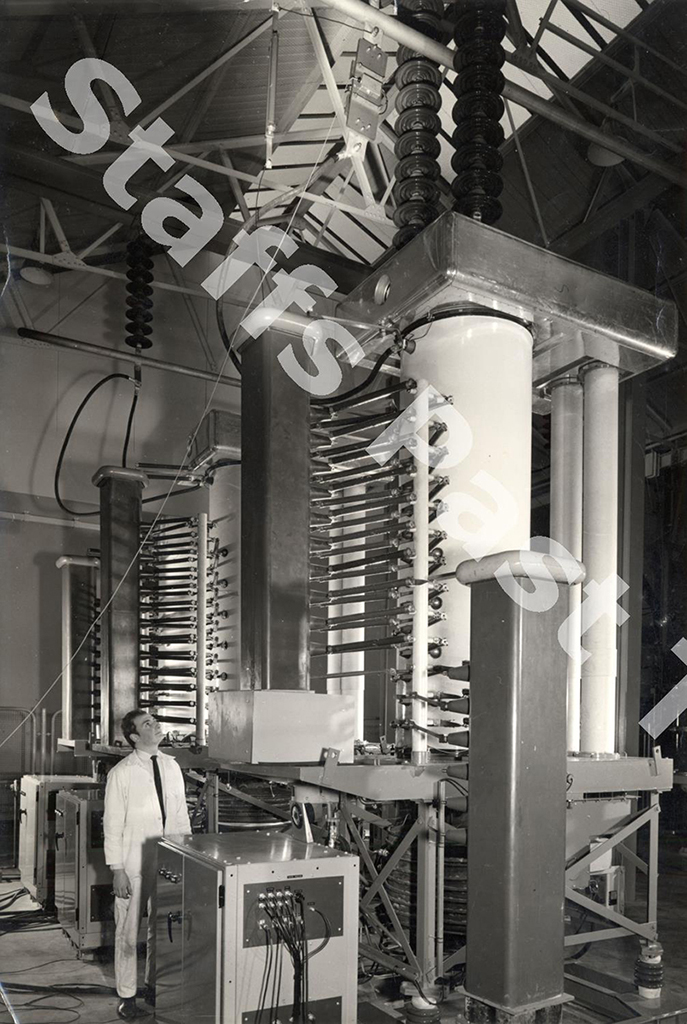 Viewing windows into a smaller room with a nice vinyl tile floor, this was originally a transformer room for the generating plant. 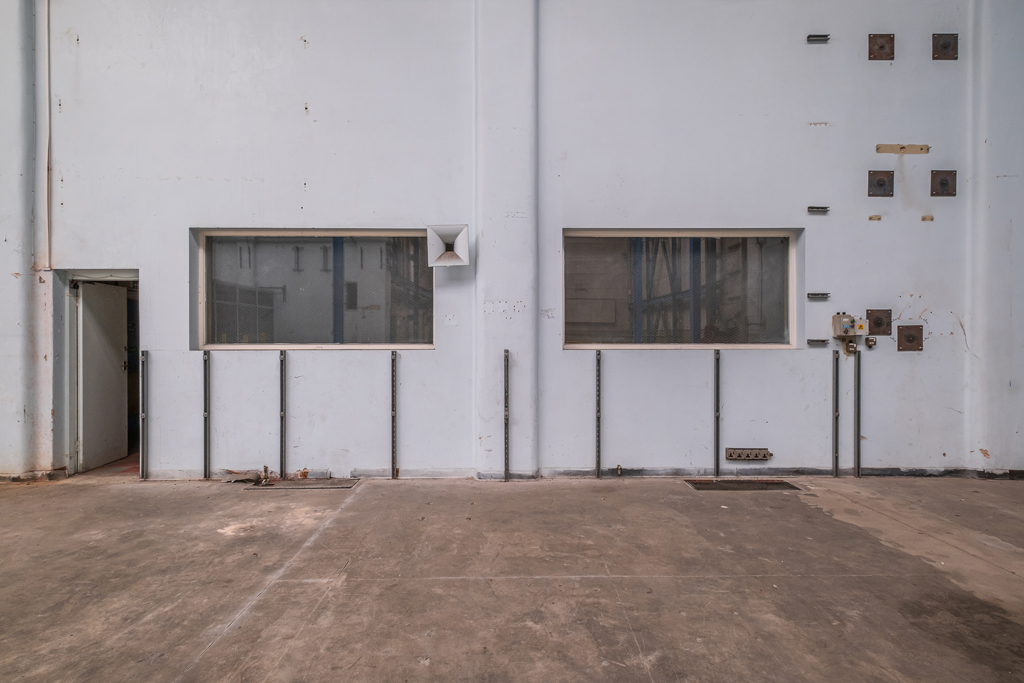 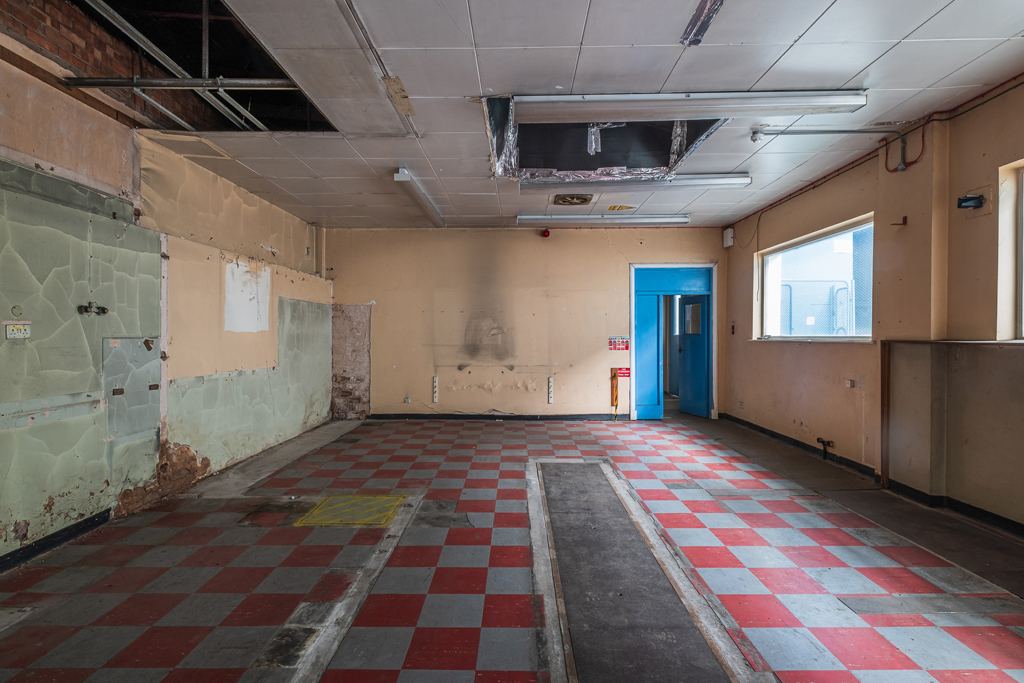 One of the two high bay testing areas, where much larger pieces of equipment could be set up for test. 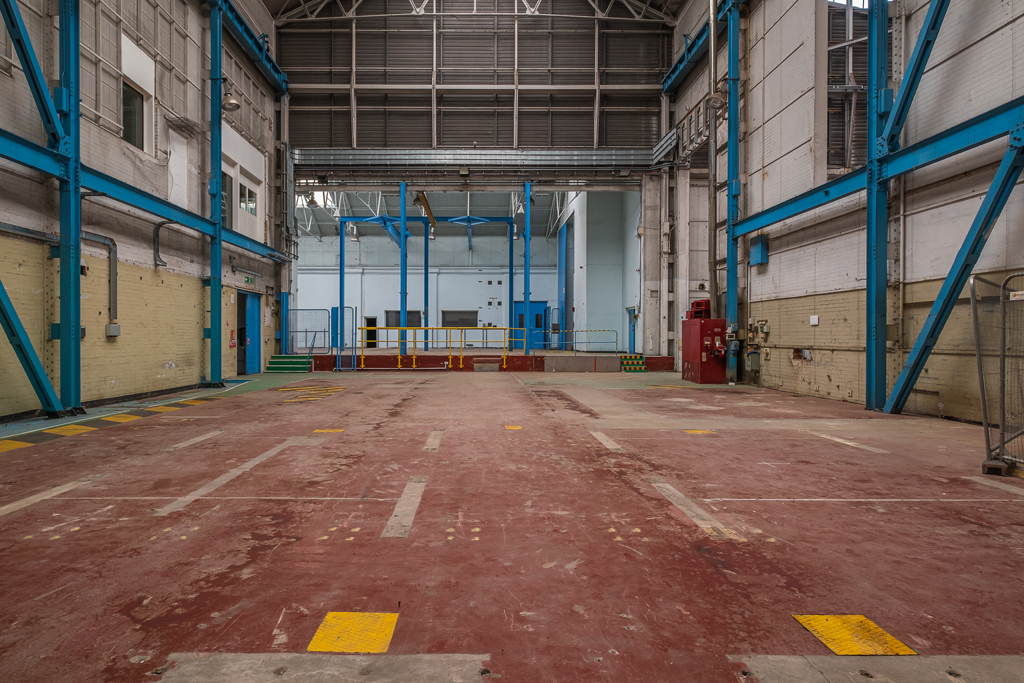 The cladded frontage of the building houses thoroughly modernised office devoid of any interesting features, the only nice bit was this viewing window at first floor level. 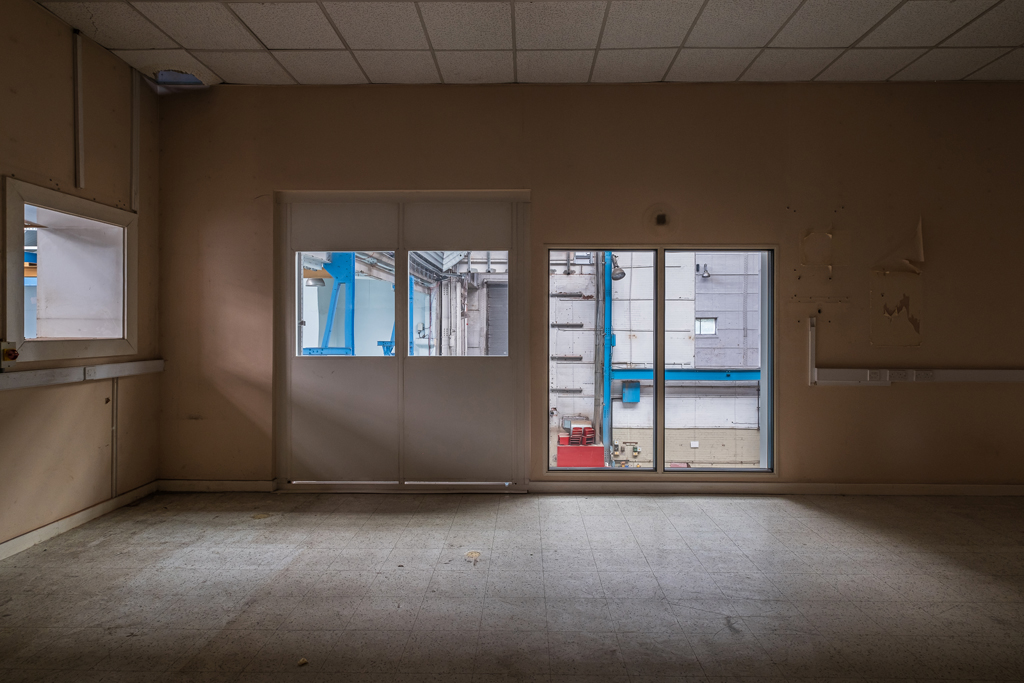 Underneath the building is a labyrinth of low height corridors, I'm unsure of the initial purpose. 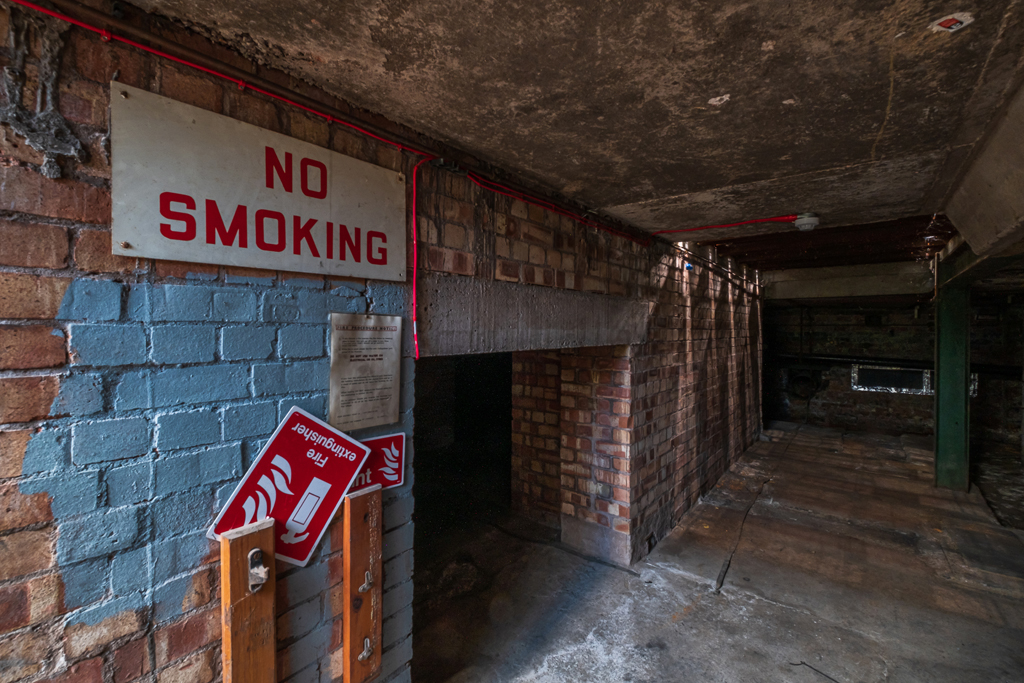 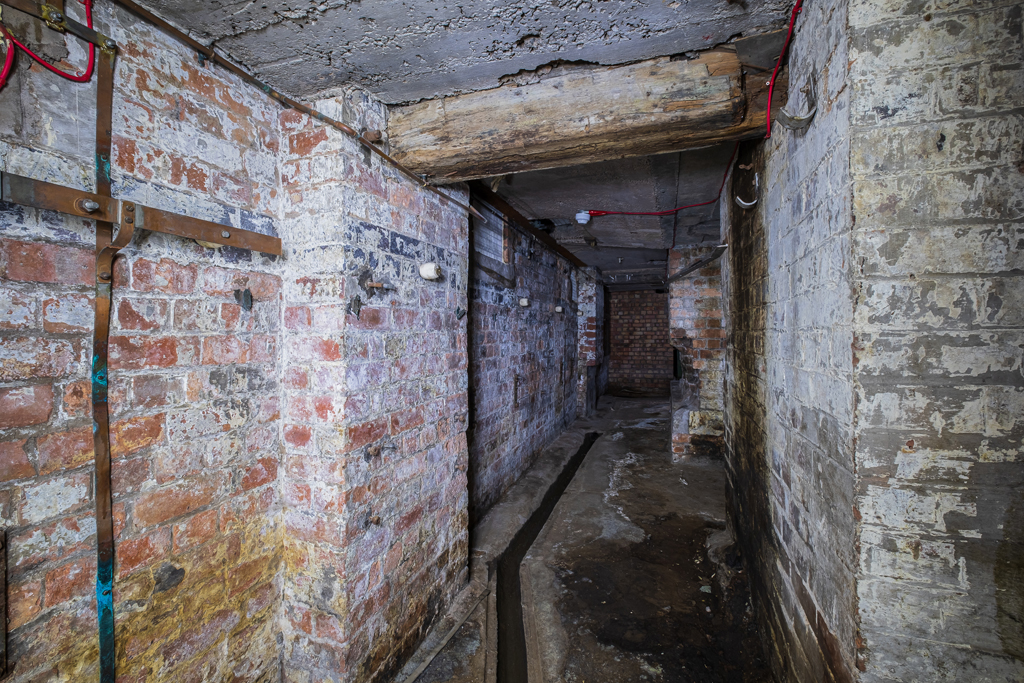 The largest of the two high bay testing areas, it was pretty enormous. Both of these date back to the initial construction, it's unclear as to what they would have been for? 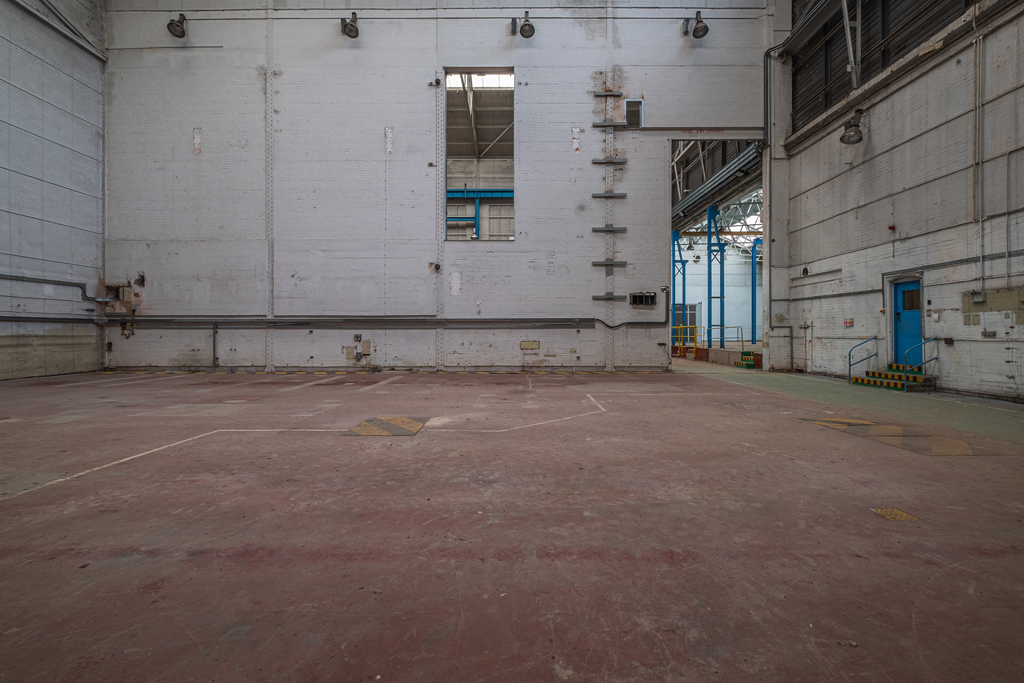 John Underhill pictured again in 1977 next to a development thyristor valve. This thyristor valve would be one part of an arm of a bridge on a valve, and was for the Cross Channel Link Project between France and the United Kingdom. The cable came ashore between Dover and Folkestone and then went underground to Sellindge Converter Power Station. At the Power Station there were four valve halls. Sellindge Power Station could import and export electricity. At a later date these thyristor valves were replaced by water cooled versions. Staffordshire Past Track 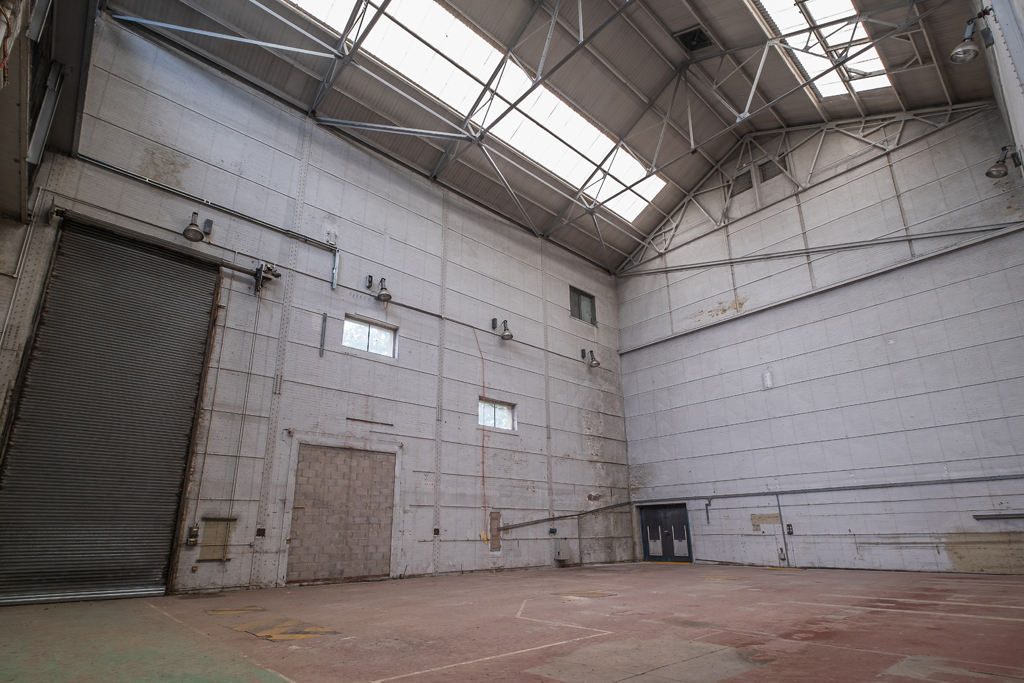 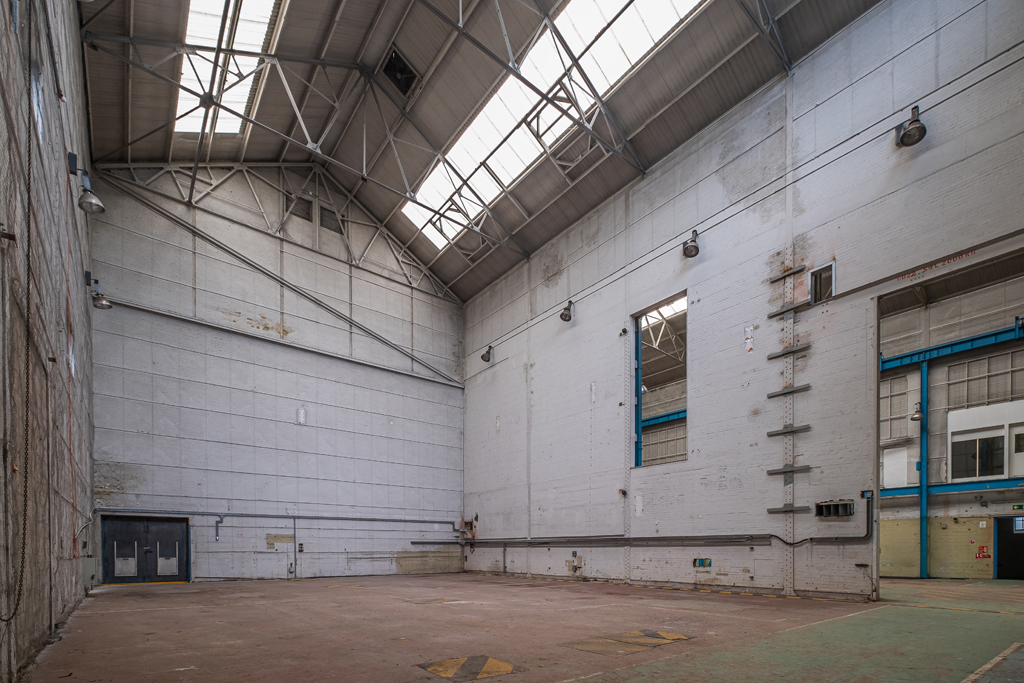